After three years of searching for missing Malaysia Airlines Flight 370, the underwater search for the plane’s wreckage has been suspended, transport officials announced Tuesday.

In October 2014, Australia, Malaysia and China bankrolled the latest iteration of the years-long search, an underwater sweep of a 120,000-square kilometer, 46,000-square mile, zone in the southern Indian Ocean.

But search crews were unable to find the Boeing 777’s main wreckage or black box data recorders during the two-year, $160 million quest. And there currently are no major, substantiated leads to the plane’s possible whereabouts.

“Despite every effort using the best science available, cutting-edge technology, as well as modelling and advice from highly skilled professionals who are the best in their field, unfortunately, the search has not been able to locate the aircraft,” Australia’s Joint Agency Coordination Center said in a joint statement with transport ministers from Malaysia and China.

“Accordingly, the underwater search for MH370 has been suspended. The decision to suspend the underwater search has not been taken lightly nor without sadness,” they added. “We again take this opportunity to honor the memory of those who have lost their lives and acknowledge the enormous loss felt by their loved ones.”

Next of kin reportedly were notified of the search’s suspension.

On March 8, 2014, Flight 370 disappeared while flying from Kuala Lumpar to Beijing with 239 crew members and passengers on board. The plane’s passengers included 152 Chinese nationals and 50 Malaysians.

In July, the transport ministers of three countries said the search would “not end, but be suspended” should no new evidence surface pointing search crews to a specified location of the wreckage. Today’s statement echoed that decision.

“Whilst combined scientific studies have continued to refine areas of probability, to date no new information has been discovered to determine the specific location of the aircraft,” it read. 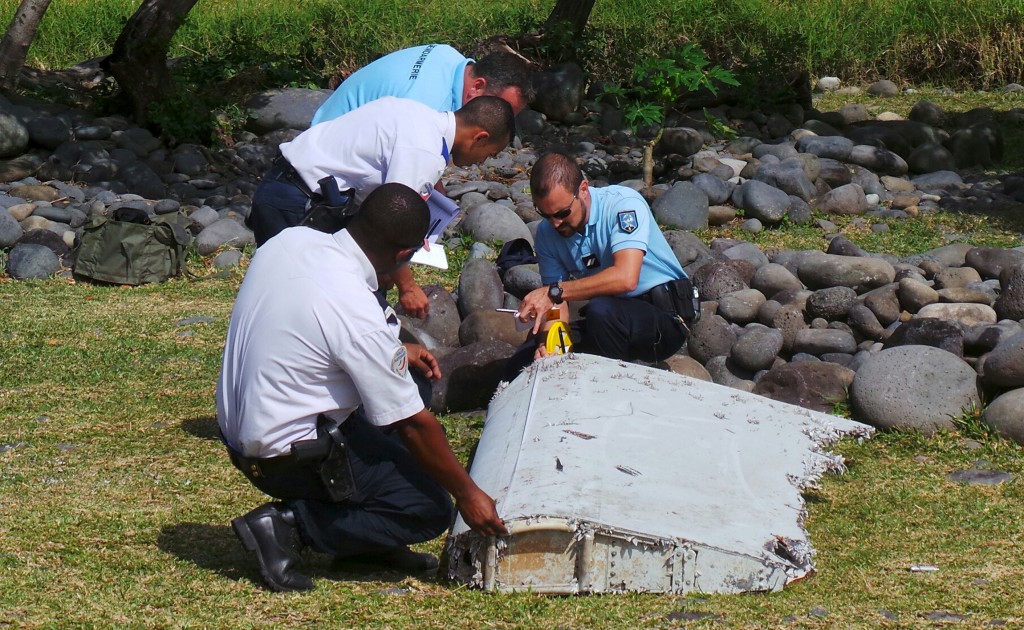 French gendarmes and police inspect a large piece of plane debris which was found on the beach in Saint-Andre, on the French Indian Ocean island of La Reunion. Picture taken July 29, 2015. Photo by Prisca Bigot via Reuters

Poor weather conditions and false leads hampered the search in an area that was largely unmapped. In July 2015, investigators found a wing part known as the flaperon belonging to Flight 370 washed ashore Reunion Island in the Indian Ocean. Then a part of a tail section of the plane showed up in Mozambique. Despite the findings, investigations were unable to locate the main wreckage.

Left: People look at a banner signed by well-wishers for the passengers of the missing Malaysia Airlines MH370 plane at Kuala Lumpur International Airport in 2014. Photo by Edgar Su/Reuters