After violence, Ecuadorians return to streets ahead of talks

QUITO, Ecuador — Residents of Ecuador’s capital ventured out into the streets Sunday despite a 24-hour military curfew, picking their way through piles of burnt tires, chunks of pavement and tree trunks smoldering after a day of violent protests across Quito.

The government and indigenous protesters planned to begin negotiations aimed at defusing more than a week of demonstrations against a plan to remove fuel subsidies as part of an International Monetary Fund austerity package. The protests have paralyzed Ecuador’s economy and cut off more than half of the country’s production of oil, Ecuador’s most important export.

The United Nations and Ecuadorian Bishops’ Conference said negotiations would begin at 3 p.m. local time (4 p.m. EDT) between President Lenín Moreno’s government and the Confederation of Indigenous Nations, which has brought thousands of indigenous protesters to the capital and organized protests across the country, from the Andes high sierra to the Amazon rainforest.

“We trust in the will of everyone to establish a dialogue in good faith and find a quick solution to the complex situation the country is living,” the U.N.’s Ecuador office said in a statement.

However, the protests have drawn in thousands of Ecuadorians from outside the indigenous minority and many said they would continue demonstrating despite the negotiations. On Sunday afternoon, hundreds of people defied the curfew and headed toward the main protest site, some carrying wooden poles. Police let them enter the park and surrounding area but searched people’s bags for potential weapons. 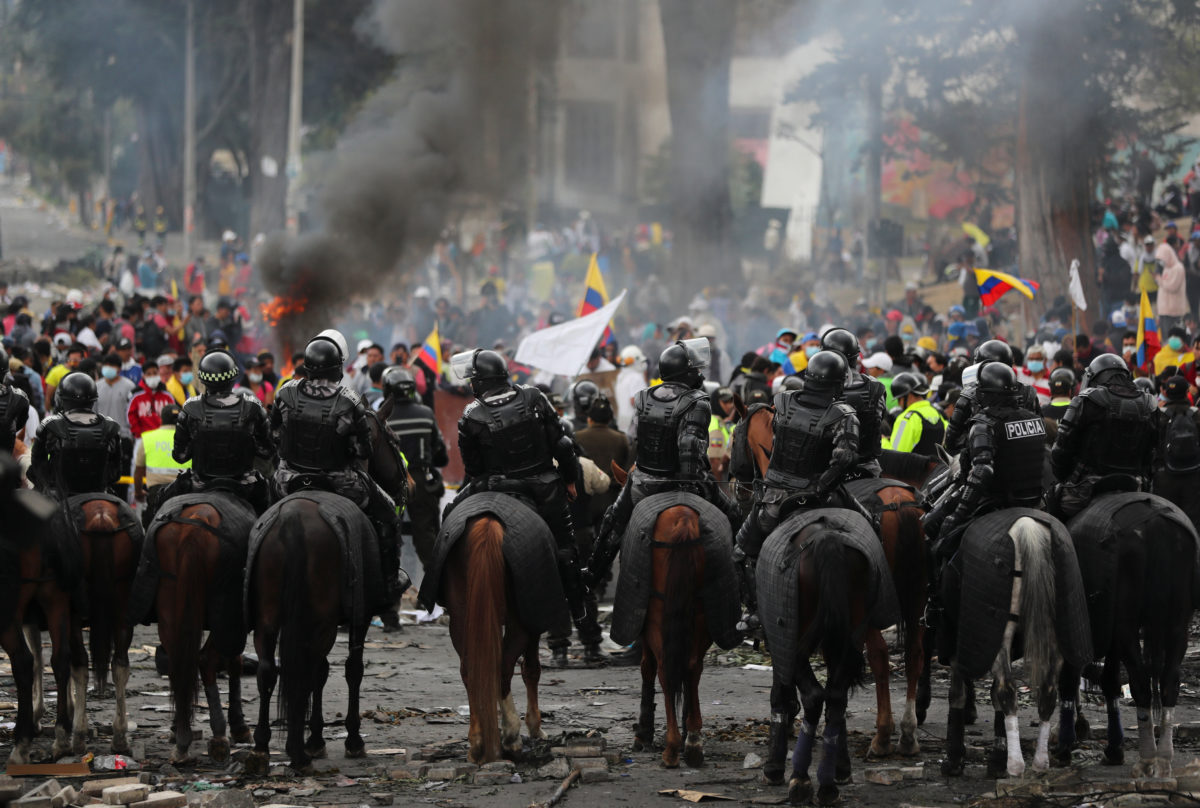 Michael Limaico, a 35-year-old unemployed sign-maker, stood on a corner in the Carcelen neighborhood near a line of burned tires that blocked one of the city main thoroughfares on Saturday. Limaico said that he and his wife had struggled for years to feed and house their three children, ages 9 to 15, with their earnings of about $600 a month from odd jobs around northern Quito.

Then, prices of food and other basic goods rose sharply after Moreno removed fuel subsidies on Oct. 2. Limaico said it had become impossible to make ends meet, and he had been protesting for days with neighbors who have blocked Diego de Vazquez Avenue as it passes through Carcelen.

“This isn’t a protest of thieves, of gangsters,” he said. “This is the people, and we’re fed up.”

Demonstrations in Quito took three distinct forms on Saturday, the most tumultuous in 10 days of protests against Moreno’s austerity measures. Thousands of indigenous people protested outside the National Assembly in the city center. Front-line troops of young people, both whites and mestizos from inside Quito and indigenous from the countryside, fought police with stones, Molotov cocktails and improvised mortars. Several dozen broke into the national comptroller office, smashing windows and setting the building afire.

Elsewhere in the city, groups of masked men attacked media offices, setting fires before they were driven off by police.

“Every citizen that disagrees with government decisions can protest in the right way but let’s not mix that up with vandalism and robbery,” said James Baez, a 78-year-old retired employee of an ARamnmerican tire company. He said he supported Moreno and the decision to impose a curfew.

On Sunday morning, soldiers and had retaken control of the epicenter of the protests in Quito — the park and streets leading to the National Assembly and the national comptroller’s office.

Moreno said the military would enforce the round the clock curfew in Quito and around critical infrastructure like power stations and hospitals in response to the day’s violence. It was the first such action imposed since a series of coups in the 1960s and ’70s, although there was little military or police presence on most Quito streets Sunday morning and thousands of people were out walking, driving and trying to run errands like getting money from cash machines.

Moreno said his government would address some concerns of protesters, studying ways to ensure resources reach rural areas and offering compensation for those who lost earnings because of the recent upheaval.

“We’ll negotiate with those who have decided to do so,” Moreno said in remarks broadcast on radio and television. “The process is moving forward and I hope to give you good news soon, because different organizations and sectors have confirmed their willingness to talk.”

Moreno said the masked protesters had nothing to do with the thousands of indigenous Ecuadorians who have protested for more than a week over a sudden rise in fuel prices as part of an International Monetary Fund-backed austerity package. He blamed the violence on drug traffickers, organized crime and followers of former President Rafael Correa, who has denied allegations he is trying to topple Moreno’s government.

Moreno served Correa as vice president before he become president and the two men went through a bitter split as Moreno pushed to curb public debt amassed on Correa’s watch.

Ecuador, a former OPEC member, was left deeply in debt by a decade of high-spending governance and the oil price drop. Moreno is raising taxes, liberalizing labor laws and cutting public spending in order to win more than $4 billion in emergency financing from the IMF.

As part of that plan, Moreno eliminated subsidies on the price of fuel on Oct. 2, driving the most popular variety of gasoline from $1.85 to $2.39 a gallon and diesel from $1.03 to $2.30. Panic and speculation sent prices soaring, with costs of some products doubling or more.

Ecuador’s indigenous people, poor and underserved by government programs, were infuriated. Over the last week, thousands of streamed into Quito.

In the country’s Amazon oil fields, protests at installations, described by some government officials as attacks, have halted or slowed production.

Ecuador had been producing 430,000 barrels a day, a figure that had dropped to 176,029 barrels by Sunday, said an official at state oil producer Petroamazonas who spoke on condition of anonymity because they were not authorized to release the information. That has led to a loss of about $14 million a day, the official said.

An indigenous leader and four other people have died during the unrest, according to the public defender’s office. The president’s office has reported two deaths.

Left: Riot police surround the building of the Ecuador's comptroller which was set on fire by vandals during Saturday's protest against Ecuador's President Lenin Moreno's austerity measures, in Quito, Ecuador October 13, 2019. Photo by Ivan Alvarado/Reuters.