This teen CEO is empowering young volunteers to give back

The holidays will be a little brighter for thousands of low-income and homeless families in California this year because of a nonprofit with an unusual CEO.

At first glance, 15-year-old Kenan Pala seems like a typical, albeit precocious, high school sophomore. He runs cross-country and plays video games with his friends.

But he also loves finance and economics, and invests in the stock market. He founded Kids4Community, a San Diego-based nonprofit that offers volunteer projects and encourages kids to participate, when he was just 12 years old.

“My parents really wanted me to understand how lucky I was to have the life I had.”

The teenage CEO manages the organization’s finances, runs the website, develops partnerships with other companies and organizes the group’s events.

The idea for Kids4Community came out of his family’s experience. Pala’s parents came to the U.S. from Turkey in 1998 and founded Confirm BioSciences, a company that manufactures and delivers drug-testing kits.

Their journey was filled with hardship, but the kindness of others, in the forms of both emotional and financial support, left an indelible mark.

“We started with very little means in our journey here, but we got so much help along the way and we’ve always felt very grateful,” said Zeynep Ilgaz, Pala’s mother. “If it wasn’t for the help we got along the way, we would not be here today where we are.”

The Palas wanted to instill this lesson in their children, so they encouraged them to give back to the community. Pala said he learned to volunteer “as soon as I learned to walk.”

“My parents really wanted me to understand how lucky I was to have the life I had and they did that in having me give back while I was growing up,” Pala said, before quickly correcting himself: “I mean, still growing up.” 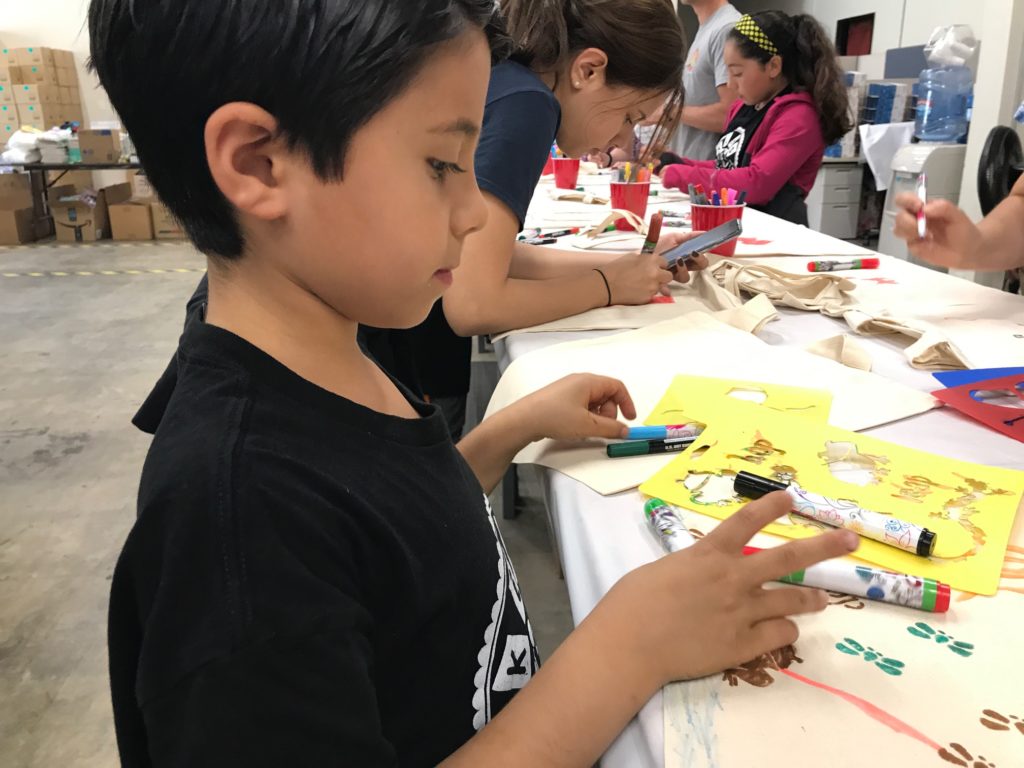 Children decorate bags full of hygiene products and other necessities at a Kids4Community initiative. Photo courtesy of Kenan Pala

Last month, adults, children, teenagers, and grandparents gathered at a warehouse in Escondido, California, where they assembled 2,000 hygiene kits, each containing bottles of shampoo, body wash, toothbrushes, toothpaste, and other toiletries.

Kids4Community organized the annual event and, in partnership with Interfaith Community Services, are distributing the kits and bags to the needy through Christmas Day.

Anyone can donate their time with Kids4Community, but its events are geared toward kids. Pala’s organization aims to boost young people’s involvement in community efforts because many organizations don’t let children volunteer.

The group conducts an annual school supply drive, and in the fall, their efforts are focused on disaster relief. In 2017, Kids4Community made care packages for survivors of the Puebla earthquake in Mexico and Hurricanes Harvey, Irma and Maria.

Another key focus is homelessness — an issue that has taken on particular significance for the group’s young founder.

A few years ago, as he remembers it, Pala was jogging along the beach with his father when they came across a sickly baby seal. He said people had surrounded the seal and were caring for it, giving blankets, and calling park rangers.

“A couple hours later, I saw a homeless person on the side of the road who was also sick and who also needed help, but instead of people going out of their way to help him like they had done for the seal, people were ignoring him. They were treating him like he was invisible,” Pala said.

The disparity of empathy for the suffering of a seal and that of a fellow human stunned him.

“I was just astonished,” he said.

Now, Kids4Community regularly organizes initiatives to help people who are homeless, including dinner service at homeless shelters and this year’s Christmas gift bag drive. In addition to meeting physical needs, the initiatives are designed to give people a sense of dignity and hope.

At the Escondido warehouse, the volunteers didn’t simply pack the tote bags. Many volunteers decorated and wrote uplifting messages on them. Yesenia Lara, 16, drew Christmas trees, reindeer, and wrote “You matter” on bags she decorated. 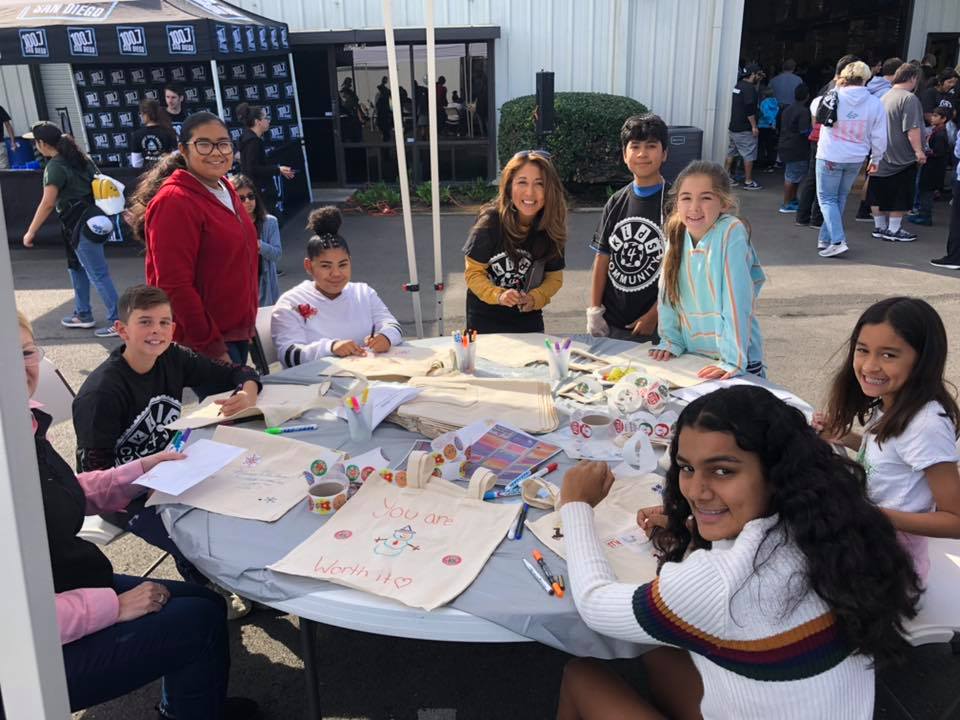 Children decorate tote bags for the low-income and homeless at a Kids4Community initiative in California. Photo courtesy of Kenan Pala

“I love how the community just comes together,” said Lara, whose mother, father and four younger siblings were also volunteering at the drive. Her family struggled financially in the past, but received help at a vulnerable time. “That made me more driven to try to help people now since I’m in a spot where I can,” she said.

In the coming years, Pala wants to expand Kids4Community’s reach beyond San Diego and perhaps beyond California. But he also plans to attend college to study business and economics. His dream schools are Stanford or the Massachusetts Institute of Technology.

So what about Kids4Community? In an ideal world, he’d like to hand the company over to his younger brother while he’s away at college.

But whether it’s through Kids4Community or a future endeavor, Pala said he wants to keep giving.

“I want to continue to help people in some way, shape, or form throughout my life,” Pala said.

Behind the troubling rise of uninsured American kids