The magnitude-6.4 quake was felt across the southern Balkans and was followed by multiple aftershocks, with several above magnitude 5. In nearby Bosnia, another temblor with a preliminary magnitude of 5.4 struck southeast of the capital and rattled Sarajevo. There were no immediate reports of casualties and only minor damage in that earthquake.

The quake in Albania collapsed at least three apartment buildings while people slept, and rescue crews were working to free people believed trapped. There was no indication as to how many people might still be buried in the rubble.

Local television stations showed footage of a young boy being pulled from a collapsed building in the coastal town of Durres, 33 kilometers (20 miles) west of the capital Tirana, after an excavator moved a broken slab of concrete and local men pulled mangled reinforcement bars out of the way.

Hours later, live TV footage showed people cheering as another child was found alive in a collapsed building in Durres where a body had been found earlier. 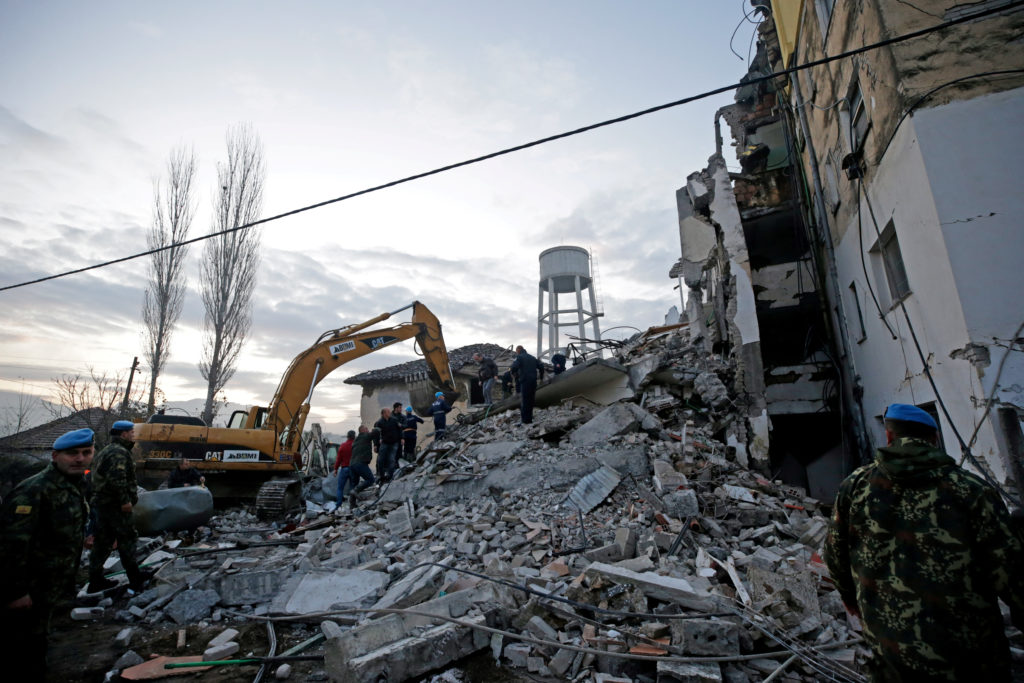 Health Minister Ogerta Manastirliu said more than 600 people had been treated for injuries, including nine hospitalized with life-threatening injuries.

“It is a dramatic moment where we should preserve calm, stay alongside each other to cope with this shock,” Prime Minister Edi Rama said.

The U.S. Geological Survey said the Albanian quake, which struck just before 4 a.m. local time, had an epicenter 30 kilometers (19 miles) northwest of the capital, Tirana, at a depth of 20 kilometers (12 miles). Scores of aftershocks were recorded, included three with preliminary magnitudes of between 5.1 and 5.4.

The worst-hit areas were Durres, where nine of the dead were found in collapsed buildings, and the northern town of Thumane, where another five bodies were pulled from the rubble, the Defense Ministry said. One person died after jumping from his home to escape in Kurbin, 50 kilometers (30 miles) north of the capital, while another person was killed on a road that collapsed in the northern town of Lezha.

“Search and rescue work continues at all sites where buildings have collapsed,” Defense Minister Olta Xhacka said in a televised statement. “But these are extremely difficult operations, where you have to work slowly because there is a high risk of further collapse, endangering not only residents, but also those trapped, and the rescuers themselves.” 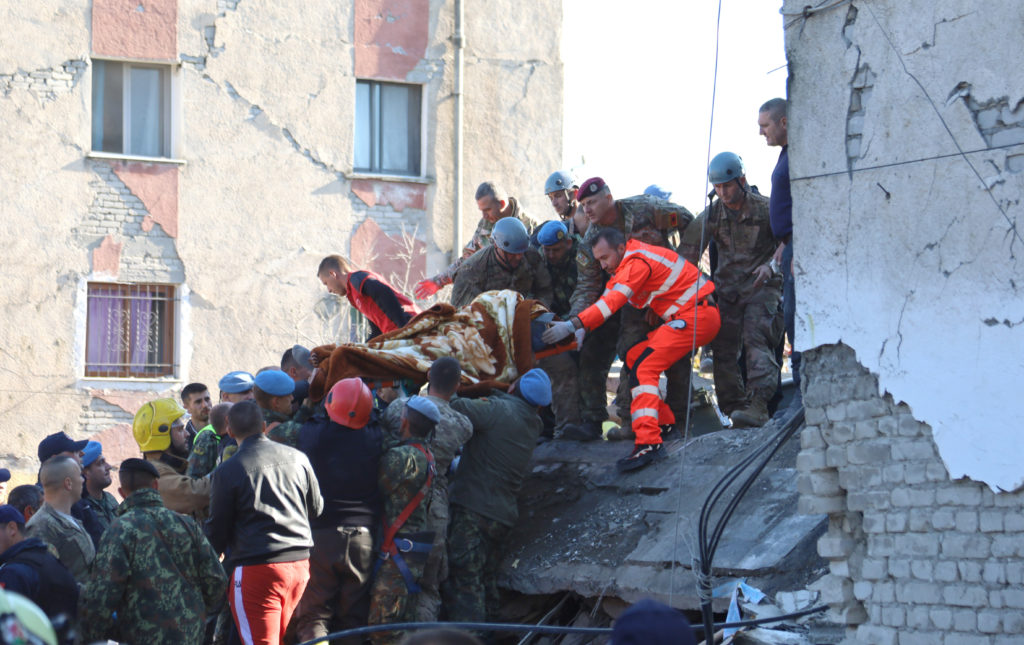 Military and emergency personnel carry an injured man on a stretcher near a damaged building in Thumane, after an earthquake shook Albania, November 26, 2019. Photo by Flatos Bytyci/Reuters

Seismologist Rrapo Ormeni of Albania’s Institute of Geosciences, Energy, Water and Environment, said a 6.4 quake was considered a strong one.

“Damage at the epicenter will be considerable because of its high energy, the magnitude it has,” Ormeni said. “Such quakes are felt in a wider area due to its major depth and magnitude. It has been felt all around the territory of our country but also abroad, up to Bulgaria, Bosnia, Italy and other (countries).”

The quake was felt along the Albanian coast as well as neighboring Kosovo, Montenegro, Greece, and parts of southern Serbia.

Authorities called on people in the most affected areas to stay out of their homes and avoid driving in the affected areas to allow emergency vehicles free access. Many reported seeing cracks in their apartment walls.

All government agencies were on alert and “intensively working to save lives at the fatal spots in Durres and Thumane,” Rama said. About 400 soldiers were setting up tents in Durres and in Fushe Kruje near Thumane in the north to house survivors left homeless by the quake. 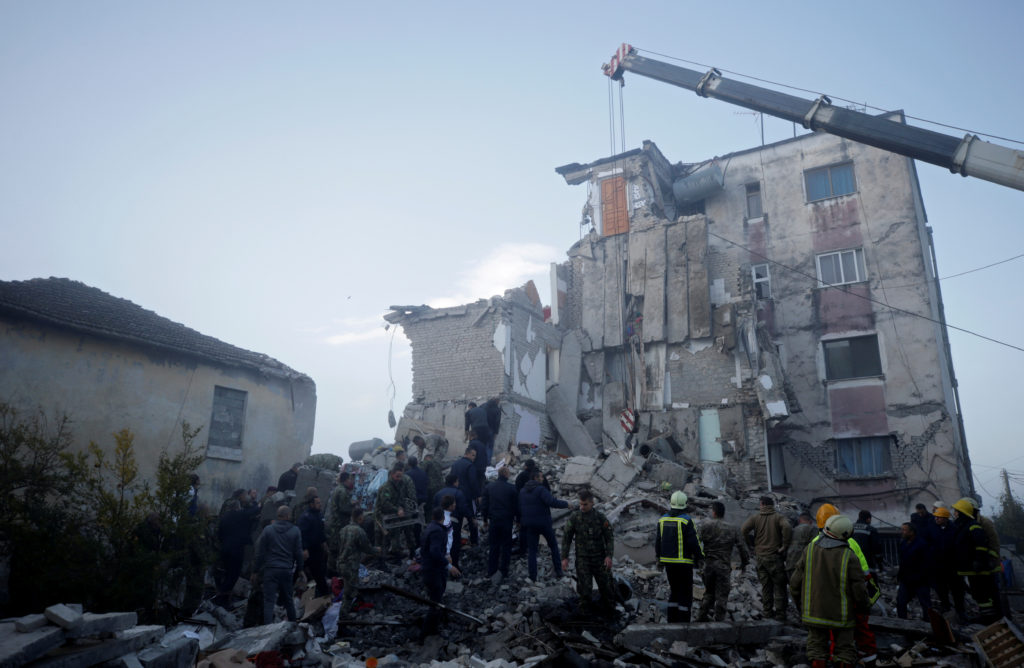 Emergency personnel work near a damaged building in Thumane, after an earthquake shook Albania, November 26, 2019. Photo by Florion Goga/Reuters

Rama said neighboring countries, the European Union and the United States had offered help. By early afternoon, rescue teams from neighboring Kosovo, Montenegro, Italy and one of two teams en route from Greece had arrived.

Greece was sending about 40 rescuers, with one 26-member search and rescue team with two sniffer dogs and specialized equipment flying from Athens to Tirana on board a military aircraft, while the second team headed to the quake zone by road from northern Greece. Italy sent specialized urban search and rescue teams from three Italian regions while Serbia, Romania, Turkey and North Macedonia were also sending search-and-rescue teams.

At least three apartment buildings and the power distribution station were damaged in Thumane.

An earthquake in September in roughly the same area damaged hundreds of homes.

Semini reported from Tirana. Elena Becatoros and Derek Gatopoulos in Athens, Greece, contributed to this report.

Left: Emergency personnel work near a damaged building in Thumane, after an earthquake shook Albania, November 26, 2019. Photo by Florion Goga/Reuters