Albania’s search for quake victims ends; death toll up to 51

TIRANA, Albania — The search and rescue operation for earthquake survivors in Albania has ended, the prime minister said Saturday, with the death toll at 51 and no more bodies believed to be in the ruins.

Prime Minister Edi Rama said preliminary figures showed more than 1,465 buildings in the capital, Tirana, and about 900 in nearby Durres were seriously damaged in Tuesday’s 6.4-magnitude pre-dawn quake.

A woman in Tirana who had been in a coma died, the health ministry said Saturday. Local media reported the 20-year old was injured by a falling brick while leaving her apartment.

In Durres, hundreds of residents as well as Rama and President Ilir Meta attended the funeral of nine members of a single extended family who were killed when a four-story villa collapsed. One young man survived and has been sent to Italy for medical treatment.

Preliminary figures estimate at least 4,000 people are homeless. About 2,500 people from damaged homes have been sheltered in hotels. Others have been taken to neighboring Kosovo or have moved to eastern areas of Albania.

The prime minister has pledged all homeless will be in “stronger homes” in 2020. 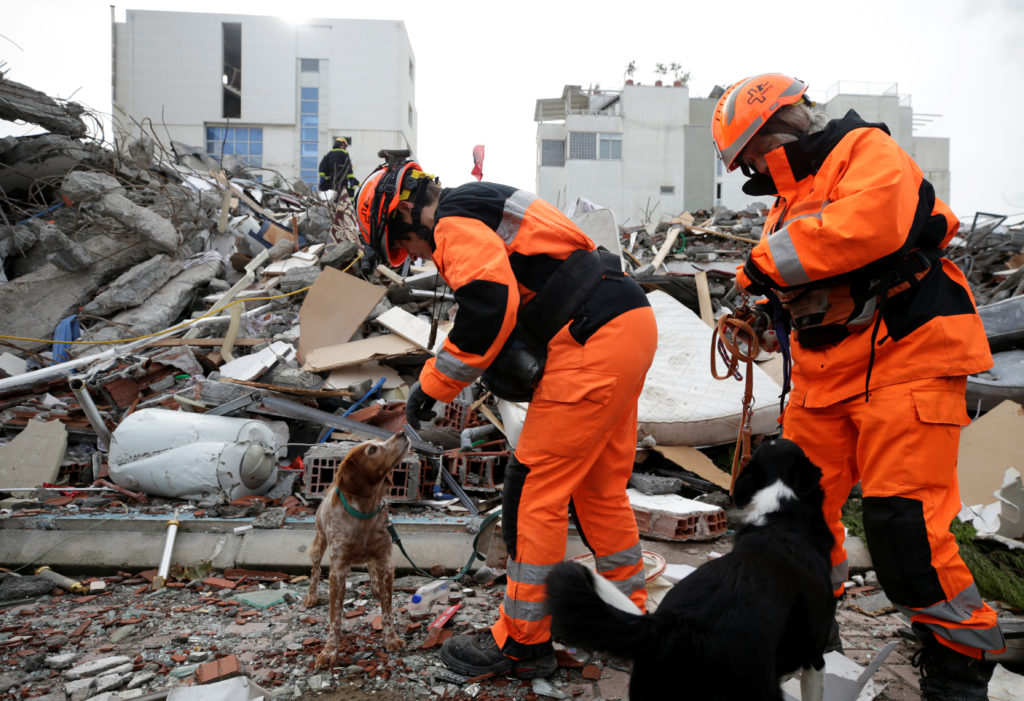 Rescue workers with dogs work on a collapsed building in Durres, after an earthquake shook Albania, November 29, 2019. Photo by Florion Goga/Reuters.

The first seriously damaged building has been demolished, and a dozen others are expected to follow. Assessment experts from Greece, France, Italy, Hungary, Bulgaria, Lithuania and Latvia are involved.

A new draft law will sentence all investors, architects and supervisors to seven to 15 years in prison for violating construction norms. That and corruption in Albania’s burgeoning building industry have been blamed for much of the quake’s effects.

The government has set up financial compensations for families of the dead, including 1 million Lek ($9,000) per family, special pensions for elders and scholarships for children.

Government and private calls for donations have collected about 15 million euros ($16 million) in three days.

Ora said she would help build a home for a homeless family and “myself directly help these families as much as I can!”

Left: Mourners carry a coffin during the funeral of eight members of the Lala family, who were killed during an earthquake that shook Albania, in Durres, Albania, November 30, 2019. Photo by Florion Goga/Reuters.