ALGIERS, Algeria — Algeria’s ailing president said Sunday that if he wins a fifth term in April, he would promote political changes that his critics have demanded and call an early presidential election in which he would not run.

In a written message to the nation, President Abdelaziz Bouteflika said if he is re-elected April 18, he would organize a public referendum on a new Constitution and respond to an opposition demand for an independent electoral commission.

The longtime leader also vowed to immediately call a “national conference” to set a date and prepare for another presidential election. Bouteflika’s decision to run next month has prompted rare, massive protests in recent days.

“I have heard the pleas of protesters and especially thousands of young people who asked about our nation’s future,” he wrote in his public message. 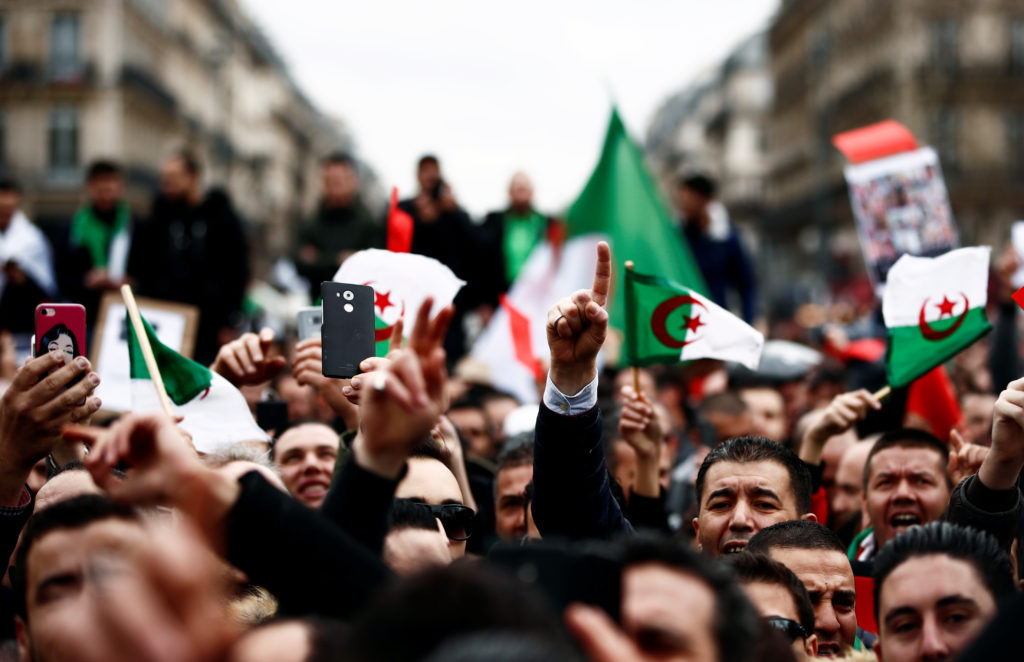 Demonstrators gather near the Monument to the Republic during a protest against Algerian President Abdelaziz Bouteflika seeking a fifth term in a presidential election set for April 18, in Paris, France, March 3, 2019. Photo by Christian Hartmann/Reuters

Bouteflika was first elected in 1999. Questions about his fitness for office have grown since he suffered a stroke in 2013 and remained largely out of public view during his fourth term.

He turned 82 on Saturday and underwent medical checks in Switzerland last week. Neither the government nor news media reported if he was back in Algeria.

Although the president’s office earlier had said Bouteflika intended to run again, his candidacy wasn’t formal until Sunday.

Bouteflika’s campaign chief, Abdelghani Zaalane, filed the president’s candidacy papers Sunday at the Constitutional Council in Algiers, the country’s capital. Hundreds of students took to the streets to denounce the new bid.

About 10 vans transported Bouteflika’s documents to the building, according to an Associated Press reporter at the scene.

Elevated security measures were in place in Algeria’s capital and especially around the Constitutional Council. Sunday was the deadline for candidates to the April 18 presidential election to file their documents.

VIDEO: 🇫🇷 🇩🇿 "Bouteflika get out", "we want an elected representative of the people": hundreds protest at the Porte d'Aix in Marseille against a bid for a fifth term by Algerian President Abdelaziz #Bouteflika pic.twitter.com/TQ1fahl85N

In France, thousands of people from the European country’s Algerian community also rallied Sunday in Paris and in the southern city of Marseille to oppose Bouteflika remaining in office.

Bouteflika’s major opponent during the 2004 and 2014 presidential elections, former Prime Minister Ali Benflis, announced Sunday that he would not challenge the incumbent this year.

Benflis said central committee of his party, Talaie El Houriat, Arabic for “Vanguard of Freedoms”), decided not to field a candidate so as “not to serve as a pretext for the candidacy of the sick president.”

The head of the moderate Islamist party MSP, Abderrazak Makri, also has ruled out running.