Facing the most serious crisis since his election in May 2017, President Emmanuel Macron remained silent but met with police officers to offer them support after “a day of unprecedented violence,” the Elysee palace said.

On Saturday, more than 130 people were injured and 412 arrested in the French capital amid one of the worst waves of unrest in the country in recent years. Police responded with tear gas and water cannons, closing down dozens of streets and subway stations to contain the riot.

The “yellow vest” movement — led by protesters wearing the distinctively colored roadside safety vests used by motorists — is bringing together people from across the political spectrum complaining about France’s economic inequalities and waning spending power. 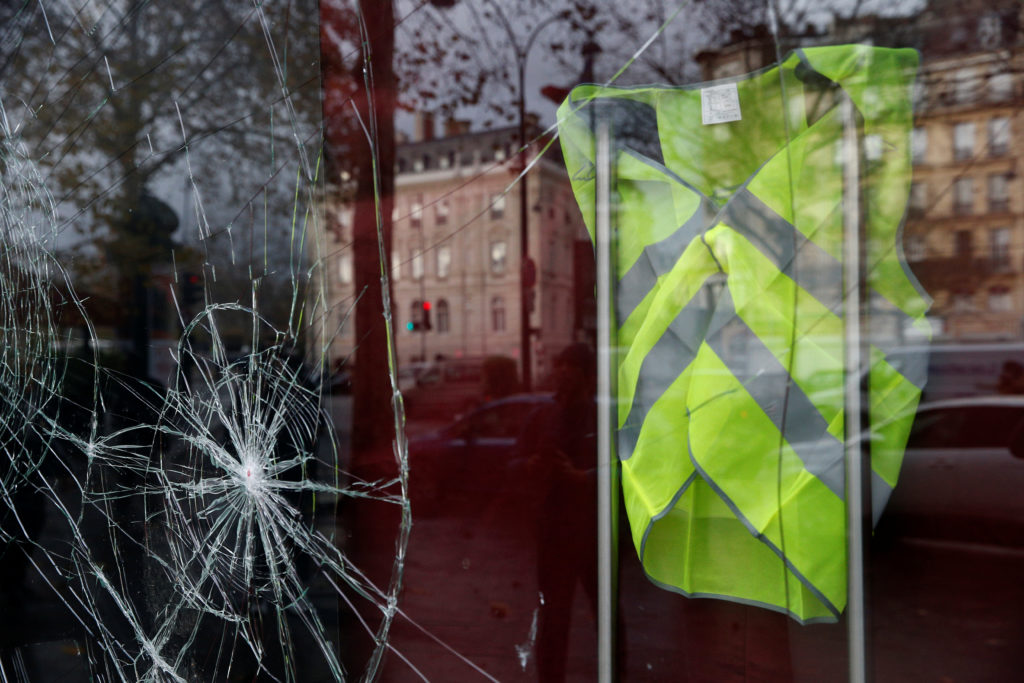 A yellow vest hangs inside a vandalized store front the morning after clashes with protesters wearing yellow vests, a symbol of a French drivers’ protest against higher diesel fuel taxes, in Paris. Photo by Stephane Mahe/Reuters

More protests took place on Monday in Paris, as dozens of ambulances blocked a bridge leading to the National Assembly. Lines of riot police stood in the rain to prevent them from getting too close to the building.

The paramedics who joined the demonstrations are complaining about changes to working conditions. Students opposing education reforms also joined in, blocking dozens of high schools across France, according to French media reports.

Clashes between protesters and police officers took place again Monday on the Indian Ocean island of Reunion, where demonstrations have been particularly violent in recent weeks.

Macron, just back from the Group of 20 summit in Argentina, held an emergency meeting Sunday on security. The government hasn’t ruled out the possibility of imposing a state of emergency.

Saturday’s rioting was the third straight weekend of clashes in Paris. The protests began last month with motorists upset over a fuel tax increase and have grown to include a range of complaints that Macron’s government doesn’t care about the problems of ordinary people. Other protests in France remained peaceful. 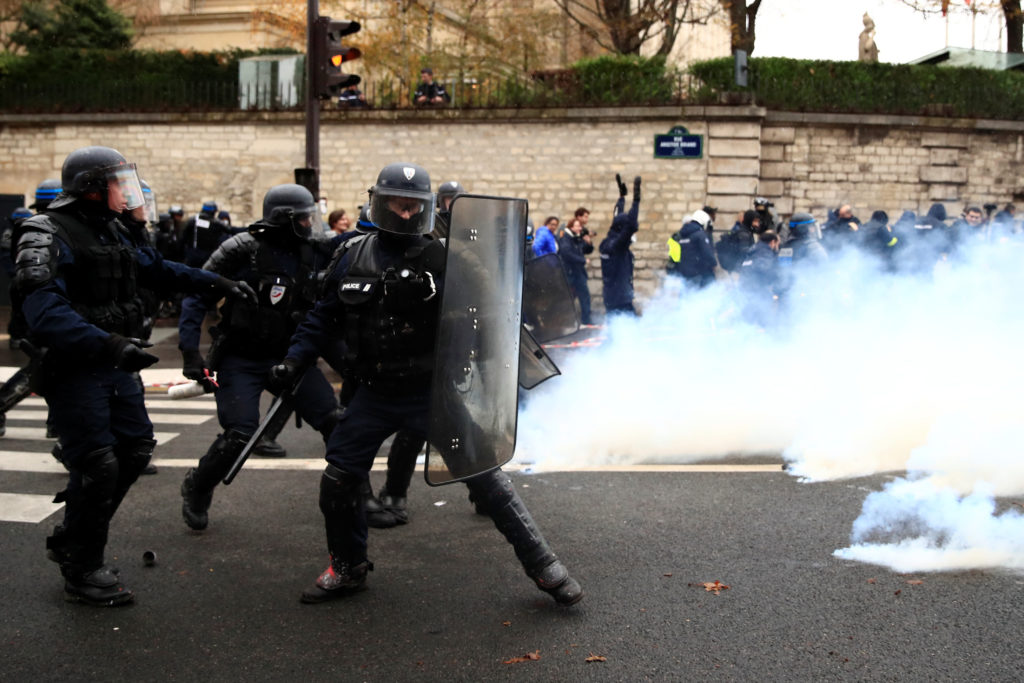 French riot police take position during clashes with French ambulance drivers as part of a demonstration at the Place de la Concorde in Paris. Photo by Gonzalo Fuentes/Reuters

By Sunday, some of the most popular tourist streets in Paris were littered with torched cars and broken glass from looted shops, and the Arc de Triomphe monument was defaced by graffiti.

During Monday’s protest by paramedics, some demonstrators set fire to a small pile of debris and blocked traffic. One activist held up a sign reading “The State killed me,” and others chanted “Macron resign!” 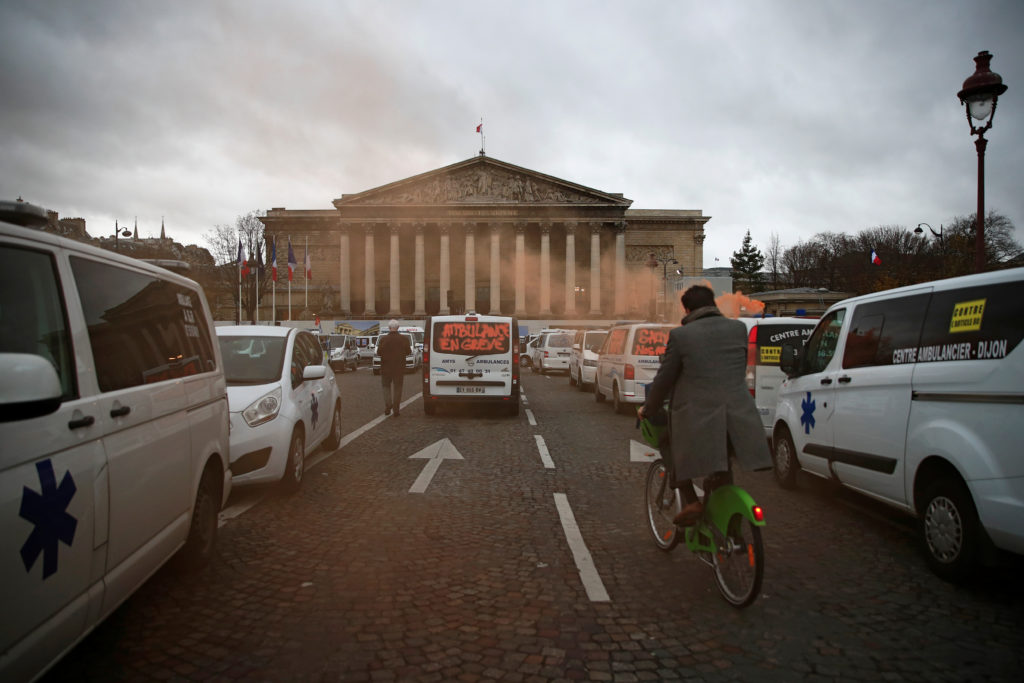 French ambulance drivers block traffic during a protest demonstration near the National Assembly in Paris. Photo by Gonzalo Fuentes/Reuters

Prime Minister Edouard Philippe and Macron have been criticized for their handling of the crisis. After meeting with the prime minister, Socialist leader Olivier Faure urged Philippe to drop the tax increases and to restore a wealth tax that was slashed by the centrist government.

“We want a change in the method. One needs to come down from Mount Olympus,” Faure said, a reference to Macron’s nickname of Jupiter, from the ancient Roman god.

Laurent Wauquiez, head of center-right Les Republicains party, urged Macron to hold a referendum to end the crisis, although he didn’t say what its topic should be.

“French people need to be heard again, and for that we must organize a referendum to decide these issues. Only these measures will restore calm,” Wauquiez said. 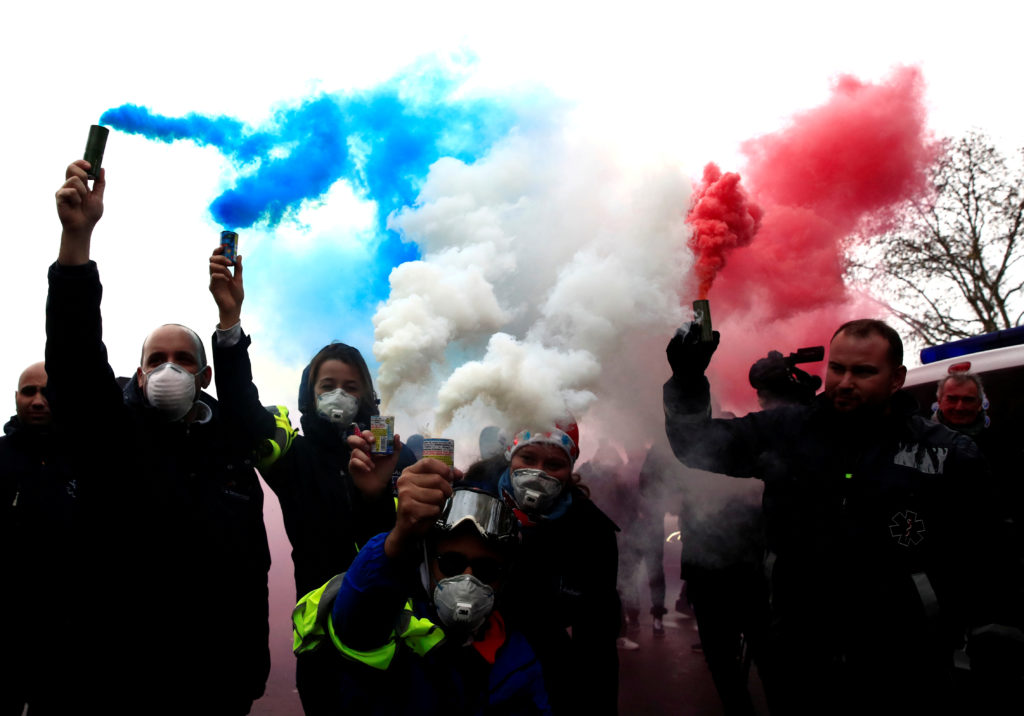 Since the movement kicked off Nov. 17, three people have been killed and hundreds injured in clashes or accidents stemming from the protests. In the past three weeks, demonstrators have been setting up roadblocks across the country and their movement has won wide public support.

Philippe will try to defuse tensions before more possible protests this weekend, speaking with representatives of the yellow vest movement on Tuesday. Members of the National Assembly will also hold talks on the crisis later this week. Meanwhile, the trade union CGT has called for a day of protest across France on Dec. 14.

Michel Euler contributed to this report.

Left: French ambulance drivers face off with French police officers during a demonstration at the Place de la Concorde in Paris. Photo by Gonzalo Fuentes/Reuters