A 23-year-old student at California State University, Long Beach, was among the victims killed in Friday night’s assault on Paris, the university said Saturday.

Nohemi Gonzalez, a third-year undergraduate from El Monte, California, had been studying abroad at the Strate College of Design in the Paris suburb of Sèvres, according to a Cal State press release.

“I’m deeply saddened by the news of the passing of Long Beach State University student Nohemi Gonzalez. Our thoughts and prayers are with her family and friends during this sad time,” university President Jane Close Conoley said in the statement.

“Our university stands with our nearly eighty foreign exchange students from France as they struggle with this tragedy. We will extend all support necessary to comfort them. We will also extend support to all students, faculty and staff who are in need.” 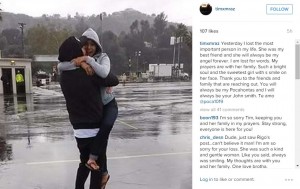 Gonzalez’s boyfriend, Tim Mraz, posted a tribute photo of the two on Instagram.

Gonzalez’s boyfriend, Tim Mraz, posted a photo on Instagram of the two embracing, and said he had lost the most important person in his life.

“She was my best friend and she will always be my angel forever,” he wrote. “I am lost for words. My prayers are with her family. Such a bright soul and the sweetest girl with a smile on her face.”

“We relied on her,” Herman said. “She had an indescribably sweet spirit and imagination. It’s unbelievable that this could have happened.”

Details of the specific circumstances of Gonzalez’s death were not immediately available.