Amid pandemic, the world’s working poor hustle to survive

DUBAI, United Arab Emirates — From India to Argentina, untold millions who were already struggling to get by on the economic margins have had their lives made even harder by pandemic lockdowns, layoffs and the loss of a chance to earn from a hard day’s work.

More than four out of five people in the global labor force of 3.3 billion have been hit by full or partial workplace closures, according to the International Labor Organization, which says 1.6 billion workers in the informal economy “stand in immediate danger of having their livelihoods destroyed.”

The toll for families is hunger and poverty that are either newfound or even more grinding than before. Hunkering down at home to ride out the crisis isn’t an option for many, because securing the next meal means hustling to find a way to sell, clean, drive or otherwise work, despite the risk.

How the world’s poor get through this pandemic will help determine how quickly the global economy recovers and how much aid is needed to keep countries afloat.

Here are six stories from six corners of the world of people who saw their lives upended by the same invisible menace.

The 33-year-old mother of five lost her husband two years ago and was left to make ends meet on just $2.50 to $4 a day from washing clothes in Nairobi’s Kibera, one of the world’s biggest slums.

But things were never as tough as they are now.

Neighbors aren’t going to work because of restrictions on movement, so they can’t afford her services. Even if they could, they don’t want her handling their laundry due to virus concerns.

“I haven’t had a good day for the last two weeks,” Andeka said.

She’s been forced to send all five kids to live with relatives who are slightly better off: “I had no choice, because how do you tell a 2-year-old you have no food to give them?”

Like many others in Kibera, home to an estimated 300,000 to 800,000 people, Andeka wakes up early and rushes to a food aid distribution point to try her luck. Crowds often overwhelm the aid workers in their desperation, and men with sticks beat them back and police fire tear gas.

Each time she goes out looking for food or a chance to earn, she risks being robbed of the few belongings in her shack of cracked mud walls and rusty iron sheet roof. There’s a bed, two mismatched plastic chairs, a thin table, some buckets for collecting water from a communal tap and her two most prized possessions: a small gas burner and an old black-and-white TV.

Just a month ago, it didn’t seem life could be any harder. Now she knows otherwise.

“It’s better for corona(virus) to end and we continue living in hunger,” Andeka said. “Hunger is normal.”

– By Tom Odula in Nairobi.

Rosemary Páez Carabajal pushed a coffee cart on the streets of Argentina’s capital, until the lockdown forced her to stop.

Páez Carabajal, her blacksmith husband who’s also out of work and their two children rent a single room in a two-story brick building for the equivalent of $119 a month. 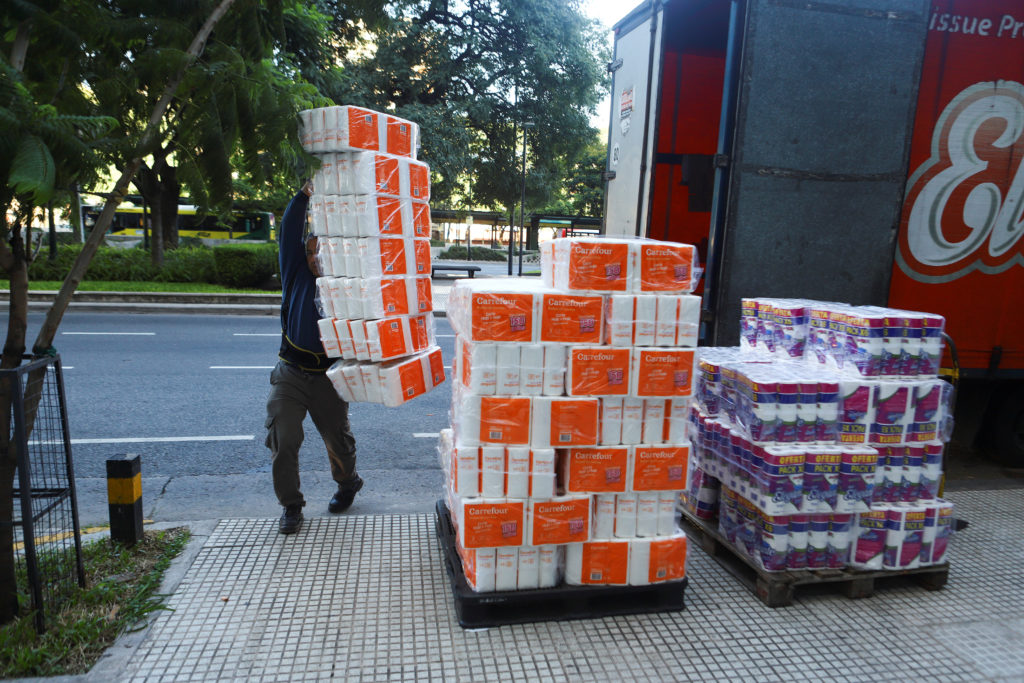 A worker unloads toilet paper packages outside a store after Argentina’s President Alberto Fernandez announced a mandatory quarantine as a measure to curb the spread of coronavirus disease (COVID-19), in Buenos Aires, Argentina. Photo by Matias Baglietto/Reuters

Now the cart sits idle in the hall, and the home is stacked with textbooks as the couple try to home-school their lone school-age child, a 7-year-old son.

They are dipping into meager savings and relying on a one-time government aid voucher worth about $150. For now, their landlord is not collecting rent.

Páez Carabajal worries her small business may not survive even after restrictions are eased.

“People are going to have doubts about buying because the disease is transmitted by grabbing things,” she said.

The coronavirus came at a time of already painful recession in Argentina, with more than a third of its 44 million residents in poverty, according to figures from late 2019. Some 3 million have requested food aid in recent weeks, adding to the 8 million getting such assistance before the pandemic.

“When the quarantine was coming,” Páez Carabajal recalled, “I said: ‘We’re all screwed, us day-to-day vendors.’”

– By Débora Rey and Víctor Caivano in Buenos Aires.

When Budi Santosa, a cook in a Chinese fast food restaurant, was told he’d be laid off, he wasn’t sure how he’d tell his wife.

“I am the breadwinner of the family. My children are toddlers. So they are the first things I thought about that day,” he said.

The 32-year-old is one of nearly 2 million who’ve lost jobs as a result of the pandemic in Indonesia, where poverty afflicts close to 10 percent of the country’s nearly 270 million people.

For Santosa the blow from the virus has been twofold: Not only has he lost the job, restrictions on movement mean he no longer earns extra cash moonlighting as a taxi driver, only from making food deliveries, which pays less.

“The government told us to stay at home, but if I stay home my wife and children will have no food to eat,” he said.

Santosa hasn’t had much time to dwell on his misfortune because he has to think about survival: Food, rent and paying down the debt on his motorcycle.

He now averages a little over $4 a day, down from $19 before the pandemic, from deliveries, just enough to buy food for himself, his wife and two young children. She stays at home to take care of the kids in their small, sparse, bare-walled home.

Santosa borrowed from friends to pay April’s rent. He’s not sure what he’ll do for May.

– By Edna Tarigan in Jakarta.

In this sprawling and bustling metropolis of some 20 million people, the “ahwa,” or coffee shop, was among the first casualties of a shutdown order for many Egyptian businesses.

No longer were they allowed to offer “sheesha,” the hookah waterpipe so popular in the Middle East. Before long they were closed altogether.

That cost Hany Hassan his job. He hadn’t been making much — $5 a day — but it was enough to feed his family.

“We are financially ruined,” said the 40-year-old father of four.

Unable to find work in a relatively pricey Cairo he could no longer afford, he moved back to family in his hometown of Mallawi, about 190 miles (300 kilometers) to the south.

But his chances for work there are even dimmer. Chronic back pain means he can’t do the manual labor jobs many people work in the provinces.

Jobless for over a month, he goes out daily looking for work but comes back empty-handed every night. To keep afloat, he’s borrowed money.

Before the pandemic, one in three Egyptians or roughly 33 million people were living on about $1.45 per day, and around 6% were in extreme poverty, or living on less than a dollar a day, according to the country’s official statistics agency.

The government has created an emergency fund for vulnerable people, offering the equivalent of around $32 a month.

Hassan is one of 2 million who have applied. He’s grateful for that, but what he really needs is work. Otherwise, he fears, “there will be famine.”

“It’s not only me,” he said. “there are many people now who have nothing to feed their children.”

– By Samy Magdy in Cairo.

Jordan’s wide-reaching lockdown has hit hard in al-Wehdat, a crowded, impoverished refugee camp in the capital.

Brothers Mohammed and Khalil Yousef used to scratch out a day-to-day existence as truck drivers. Mohammed, 40, hauled construction supplies. Khalil, 38, moved produce. Each earned between 10 and 20 dinars, or $14 to $28, a day.

Between them they have nine children, all under 16. In Khalil’s cement shack, the refrigerator is bare save for some tomatoes, onions and a few bags of pita bread.

Mohammed said residents usually help each other out in hard times, but borrowing from neighbors isn’t an option today. “The whole camp is without work now,” he said. “Everyone is broke.”

He opened his wallet to show its contents: ID cards, but no cash: “In the beginning I still had a little bit of money, but now there’s nothing.”

Al-Wehdat is Jordan’s second-largest camp for Palestinian refugees, the descendants of those who fled or were driven from their homes in the 1948 Arab-Israeli War. Over the years, Syrian refugees and Egyptian migrant workers have also settled here, and today about 60,000 people are crammed into the camp.

The government is implementing a program to support day laborers and says it has made payments to more than 200,000 families. The Yousefs have not received anything so far but say some neighbors have gotten the equivalent of $35.

After being idled for weeks, they are now only partially getting back to work as some restrictions on drivers are eased.

There are fears that loosening the lockdown could cause a spike in the virus in overcrowded al-Wehdat, but it’s unemployment that worries people most.

“People are afraid of going broke,” Mohammed said, “of not being able to put food on the table.”

– By Karin Laub in Amman.

Mahesh and Gita Verma ran a flower stall outside a Hindu temple honoring the monkey god Hanuman in this northern Indian city.

When authorities ordered a lockdown on nonessential businesses, the Vermas rushed to unload their stock, selling flowers to regular customers for just a few cents.

The money they got amounted to “nothing,” Mahesh said as the couple closed down the stall, covered beneath a blue tarp.

India has the world’s largest population of extremely poor people: 176 million living on less than $1.90 a day, according to the World Bank.

As of 2019, India had halved its poverty rate over the previous 15 years, fueled by growth topping 7% annually, but the crisis is expected to set that back. Economic activity in the country has fallen by 70%, according to French bank Société Générale.

Much of that activity was powered by workers in the informal sector — rickshaw drivers, housekeepers, farm hands, shoeshiners and modest entrepreneurs like the Vermas — who make up 85% of India’s labor force and now find themselves indefinitely sidelined.

The Vermas and their five children, ages 8 through 20, were already living hand to mouth before the coronavirus. Now they’ve canceled their cable TV — a small luxury that to them represented success — and are limited to eating mostly potato-based dishes.

“We cannot have food like we used to have,” Gita said.

The couple feared they’d run out of cash and food before the scheduled end of the lockdown May 18, so they took a small loan from friends to convert the flower stall into a bread and milk shop — the kind of business the government has deemed essential and thus exempt from the shutdown.

– By Biswajeet Banerjee in Lucknow and Emily Schmall in New Delhi.

Left: Volunteers pack grocery items to be distributed among poor and homeless people during a 21-day nationwide lockdown to slow the spreading of coronavirus disease (COVID-19), in Ahmedabad, India. Photo by Amit Dave/Reuters