ATHENS — A fire broke out at a refugee center on the Greek island of Lesbos, Greece’s firefighting service said Sunday, causing considerable damage to a warehouse but no injuries.

It was the second fire at an installation built for migrants, after a reception center was burned down by unknown perpetrators last Monday. The warehouse, which contained furniture and electrical appliances, was completely destroyed, a firefighting spokesman told The Associated Press on condition of anonymity, because an investigation into the fire is ongoing.

The blaze at the refugee center came amid a tense standoff between Turkey and the European Union over who is responsible for the millions of migrants and refugees on Turkish territory and the thousands who have massed recently at the Greek border.

Thousands of migrants headed for Turkey’s land border with EU member Greece after Turkish President Recep Tayyip Erdogan’s government announced earlier this month that it would no longer prevent migrants and refugees from crossing over into EU countries.

Greece has deployed riot police and border guards to repel people trying to enter the country and the Greek border area has since seen violent confrontations between them and the migrants. On Saturday, youths threw rocks at Greek police and tried to break down a border fence.

In Istanbul on Sunday, Erdogan called on Greece to open its borders and allow the migrants to move on to other European countries.

“These people won’t stay (in your country), they will move to other European countries,” Erdogan said. “Why don’t you open your gates too, let them go to other other countries, and rid yourself of this burden.”

In a speech marking International Women’s Day, Erdogan asserted that woman and children were bearing the brunt of the crisis.

“Is the West’s heart breaking over all of this? No. Is it raising its voice? No,” Erdogan said.

Meanwhile, Cyprus announced it will send security forces to the Greek-Turkish land border to help protect it. Greek government spokesman Kyriakos Kousios said in a statement that the decision to send the force was announced by Cypriot President Nicos Anastassiades to Greek Prime Minister Kyriakos Mitsotakis during a telephone conversation the two had Sunday morning.

“The president’s proposal was gratefully accepted by Greece’s Prime Minister and, therefore, a force from Cyprus’ security forces will travel to Greece immediately to defend and guard Greece’s, and Europe’s, borders,” the Cyprus spokesman’s statement said. 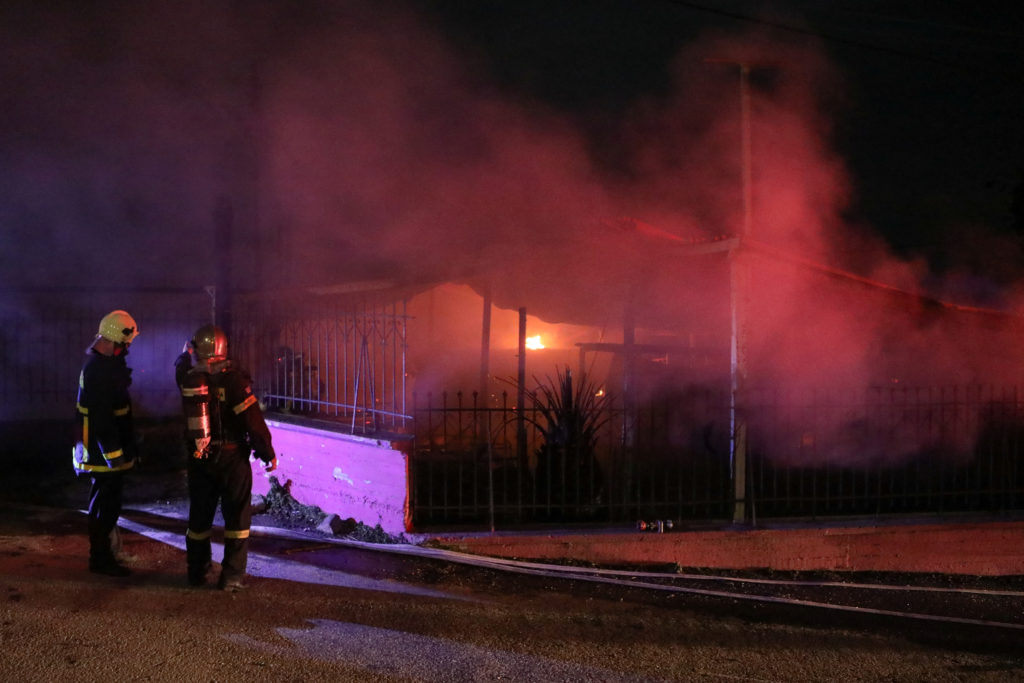 Firefighters stand next to the burning premises of the community centre of NGO “One Happy Family” on the island of Lesbos, Greece, March 7, 2020. Photo by Elias Marcou/Reuters.

The Greek government released a video purporting to show a Turkish armored vehicle trying to pull down part of border fence with a rope. It claimed the vehicle was partly purchased with EU border funds. The Associated Press could not verify the authenticity of the video. There was no immediate comment from Turkish officials.

Turkey is accusing Greece of mistreating the migrants. Many migrants have reported crossing into Greece, being beaten by Greek authorities and summarily forced back into Turkey.

Erdogan will travel to Brussels on Monday to talk with top EU officials about a 2016 Turkey-EU agreement on containing the refugee flows to Europe that has now collapsed. Each side has blamed the other.

The deal called for Turkey to halt the flow of Europe-bound migrants and refugees in exchange for up to 6 billion euros ($6.7 billion) in aid for Syrian refugees on its territory, fast-track EU membership and visa-free travel to Europe for Turkish citizens.

“I hope that we will return from Brussels with a different result,” Erdogan said.

Erdogan has demanded that Europe shoulder more of the burden of caring for refugees, accusing the EU of failing to disburse the money. He announced that Turkey, which already houses more than 3.5 million Syrian refugees, would no longer be Europe’s gatekeeper.

EU foreign ministers have criticized Turkey, saying it is using the migrants’ desperation “for political purposes.” EU countries are still dealing with the political fallout from a wave of mass migration five years ago.

Thousands of migrants have slept under terrible conditions in makeshift camps near the Greek border since the Turkish government said they were free to go, waiting for the opportunity to enter Greece.

Left: A classroom is seen burnt after a fire at the premises of the community centre of NGO "One Happy Family" on the island of Lesbos, Greece March 8, 2020. Photo by Costas Baltas/Reuters.