Analysis: 64 years after the Korean War, the world’s coldest and most dangerous peace

SEOUL — Sixty-four years ago this month (July 27​, 1953)​ the guns stopped firing in the Korean War, officially ending a conflict that cost the lives of more than 30,000 American combatants. ​

But​ ​for Koreans on either side of a heavily-armed Demilitarized Zone, the three-year war that killed as many as two million Korean​ fighters and civilians ​concluded not with a treaty but only an armistice, and the world’s coldest and most dangerous​ peace. Today, on one side, the communist North lives between nuclear braggadocio and economic privation. On the other, a democratic South that has achieved Western levels of prosperity amid disciplined anxiety.

For me, a third time visitor to South Korea, the country is always an array of contrasts. The risk of war is never far away but Seoul on the surface resembles the more peaceful capitals of Asia. It is now the 12th richest nation in the world, but the economy is struggling to make the transition from big companies making big things like supertankers to a more innovative and risk taking model. A newly-elected liberal president will try to govern a fundamentally conservative society.

The city offers frequent jarring reminders of both the grim post-war decades and the current prosperity — and of the knife’s edge between peace and the dangers of war.

The city offers frequent jarring reminders of both the grim post-war decades and the current prosperity — and of the knife’s edge between peace and the dangers of war.

In an elegant Seoul hotel, I saw a business executive talk to an international conference of his boyhood experience immediately after the war, going out from the city​ with his family into the mountains, stripping bark from trees for nourishment. 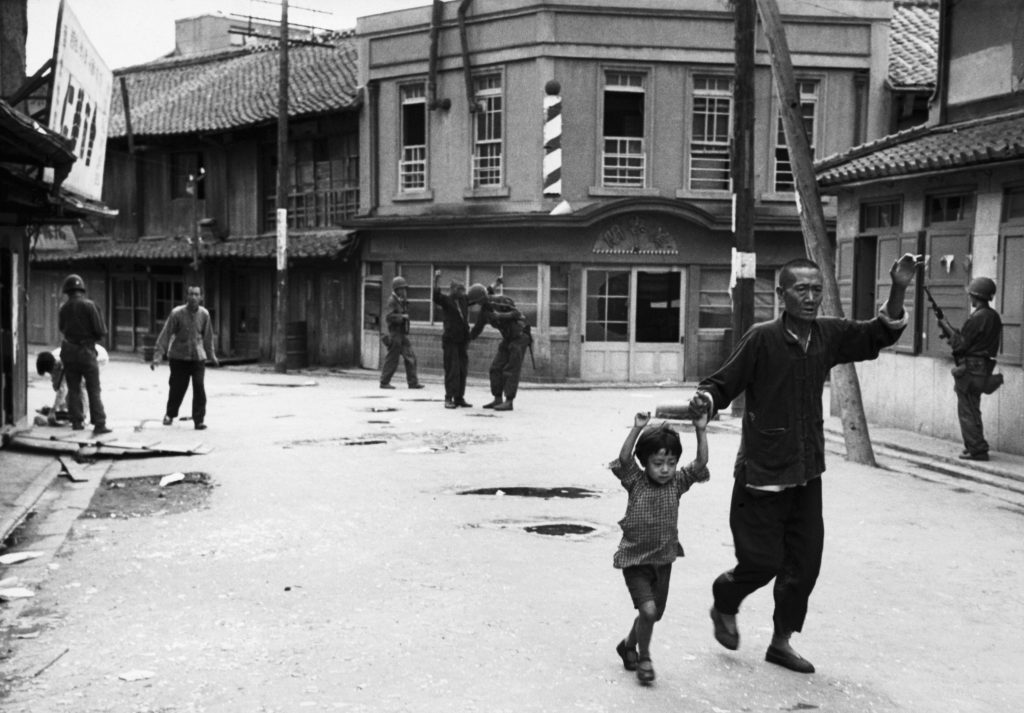 Residents of a South Korean city flee during the war. Photo by © Hulton-Deutsch Collection/CORBIS/Corbis via Getty Images.

At another sprawling hotel complex on the edge of Seoul​, a think tank analyst described an increasingly volatile​ Northeast Asia: a ​nuclear​ North Korea, an ambitious China, a restless Japan and, beyond Asia, a United States now more interested in transactional than ​traditional​ diplomacy.​ (The latest Pew Research global survey shows a 75 percent approval rating among South Koreans for the United States, among the world’s highest,​ but a​ tanking 17 percent approval of President Donald Trump. By comparison, President Barack Obama had 88 percent).

Almost every day, television newscasts and newspapers carry lead stories of another North Korean missile or nuclear test. (Last Friday, the U.S. also announced it would soon ban citizens from traveling to or through North Korea). Yet ​in​ Seoul, a once bland city now becoming more architecturally ambitious, Koreans​ start their working days ​walking​ past signs pointing to the nearest bomb shelters and head ​into the city’s ubiquitous coffee shops.

But get deeper into conversation and sometimes you hear something different, especially when there​ ​is talk in​ in Washington that all options are on the table for dealing with the North.​ The South Korean capital is only 30 miles from the Demilitarized Zone, and experts calculate that even a North Korean conventional attack would kill tens of thousands within hours. 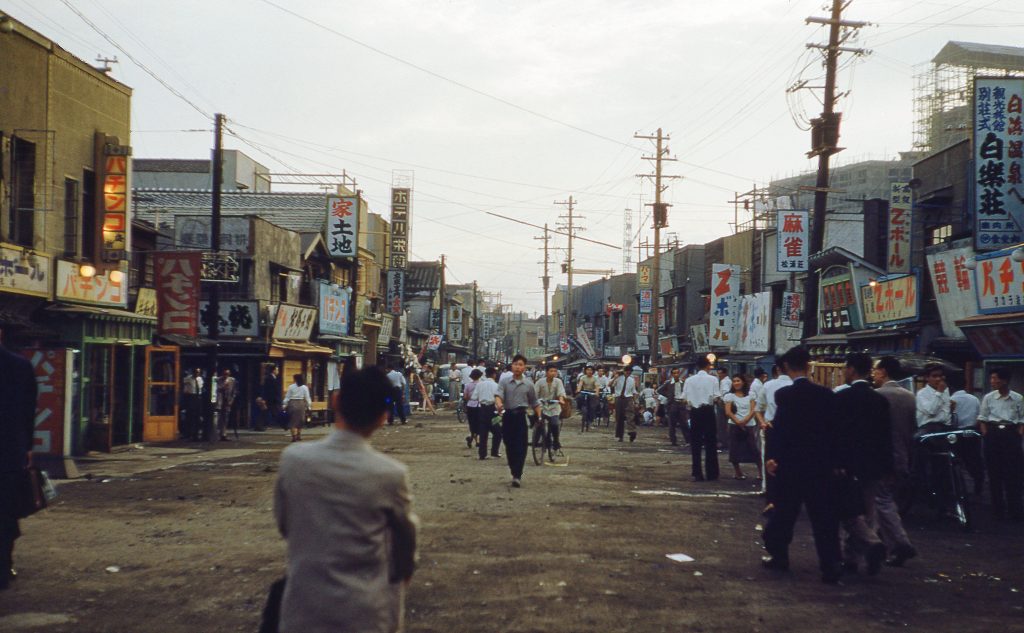 A view of Taejin, South Korea, during the Korean War, with multiple store signs, power lines, and villagers walking and bicycling. Photo by Smith Collection/Gado/Getty Images.

“I ​cannot imagine​ ​living​ in a country ​even more barren ​than it​ was in the 1950s, full of the waste from nuclear and biological weapons,” a mid-30s Seoul resident told me.

Other reminders of those barren post-war ​days pop up in odd ways. Many Seoul restaurants carry a dish called Military Stew, which has become popular with younger customers offering a big dish of food for $6 to $8. But when they ask their parents about the ingredients — spam, sausage, ham and ​ bits of green ( Koreanized with kimchi and hot sauces​) — they are told these ​were​ the leavings their elders gathered from U.S. military bases in the years immediately after the war.

(In the interests of journalism, I tried it, but probably will forsake it in future visits for the wide variety of interesting Korean cuisine).​

So, the question for many here: What’s our next move? 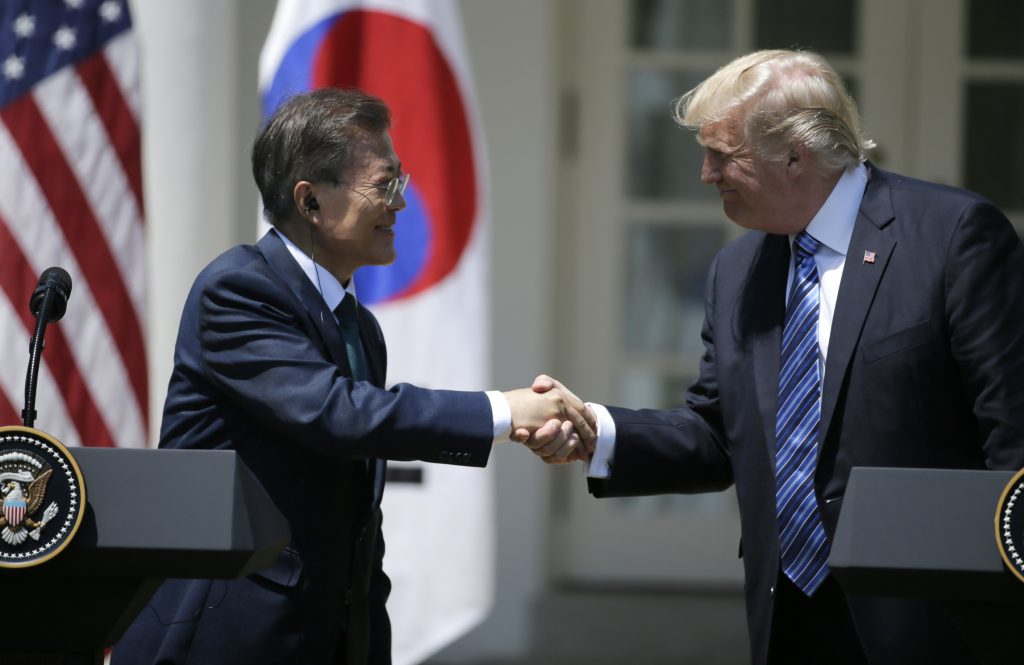 Newly-entrusted with preserving the peace and expanding the prosperity is liberal South Korean president Moon Jae-in, who was​ elected in May​ following the impeachment of his ​​conservative predecessor Park G​eun-hye​ for her involvement in an influence peddling scandal.

President Moon comes from the line of South Korean politicians going back to former President Kim Dae-jung​ ​who sought ​some kind of rapprochement ​with the north. So far, every Moon gesture to reach out to North Korean leader Kim Jong-un​ has been rebuffed or ignored. But he keeps on trying.

Moon has gained time and a bit of running room, according to both American and South Korean diplomats, with his Washington and G-20 summit meetings with President Trump. Moon’s entourage has so far spun the conservative South Korean media and foreign policy establishment to the view that the encounters​ were successful, especially the Washington summit that gave South Korea a leading role in dealing with the North.

American officials think the relationship between South Korea and the U.S. could come under increasing strain if Moon’s efforts with the North do not bring results.

Former U.S. Ambassador Mark Lippert said “there is a modicum of alignment” between Seoul and Washington. But he and other American officials think the relationship between South Korea and the U.S. could come under increasing strain if Moon’s efforts with the North do not bring results.

​As with ​most democratic leaders, Moon’s ultimate political success rests on the country’s economic performance, especially reversing the upward trend of youth unemployment. The economy is expected to grow by 2.6 percent or​ more this year, reasonably healthy by western standards but lagging behind Asian dynamic expectations. 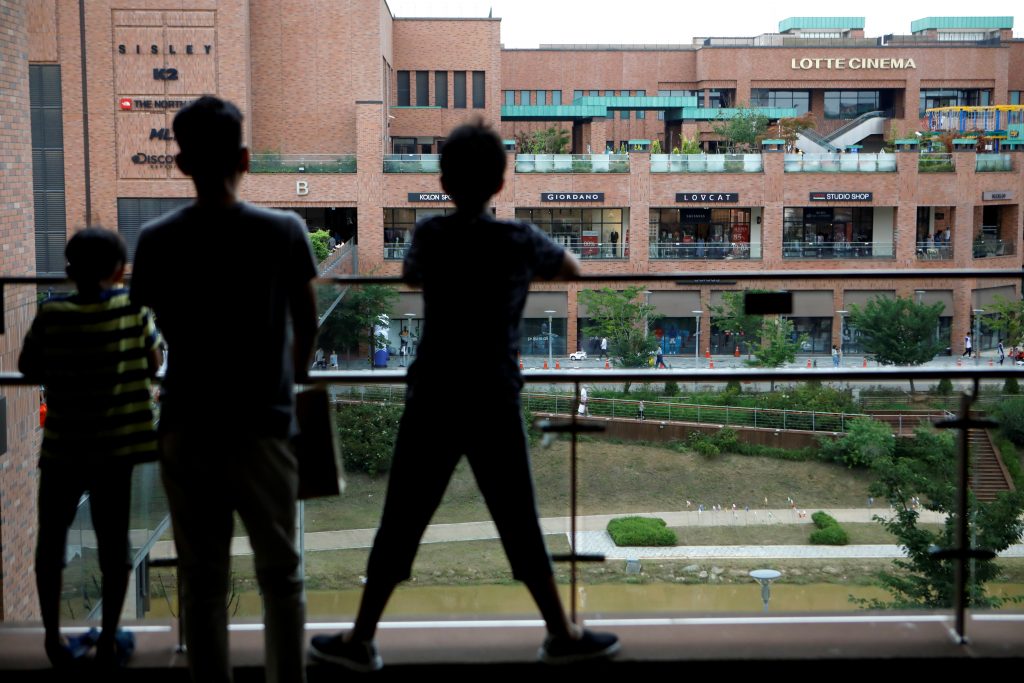 Visitors at a shopping mall near the demilitarized zone separating the two Koreas in Paju, South Korea. Photo by REUTERS/Kim Hong-Ji.

And, expressed by both analyst Kim and others, Seoul youth unemployment — and to loosen the grip of the major corporations, or chaebols, on the economy and to ​encourage more dynamic small businesses — is a dilemma perhaps beyond the ability of Moon or any politician to resolve quickly.

Young South Koreans advance through one of the most competitive education systems in the world; more than ​70 percent are now going to higher education. (Males go through two years of mandatory military service). When they emerge, they want nice office jobs, which the chaebols are producing in smaller numbers.​

The system, explained Kim, does not produce risk-takers ready to settle for lower salaries with small start ups. 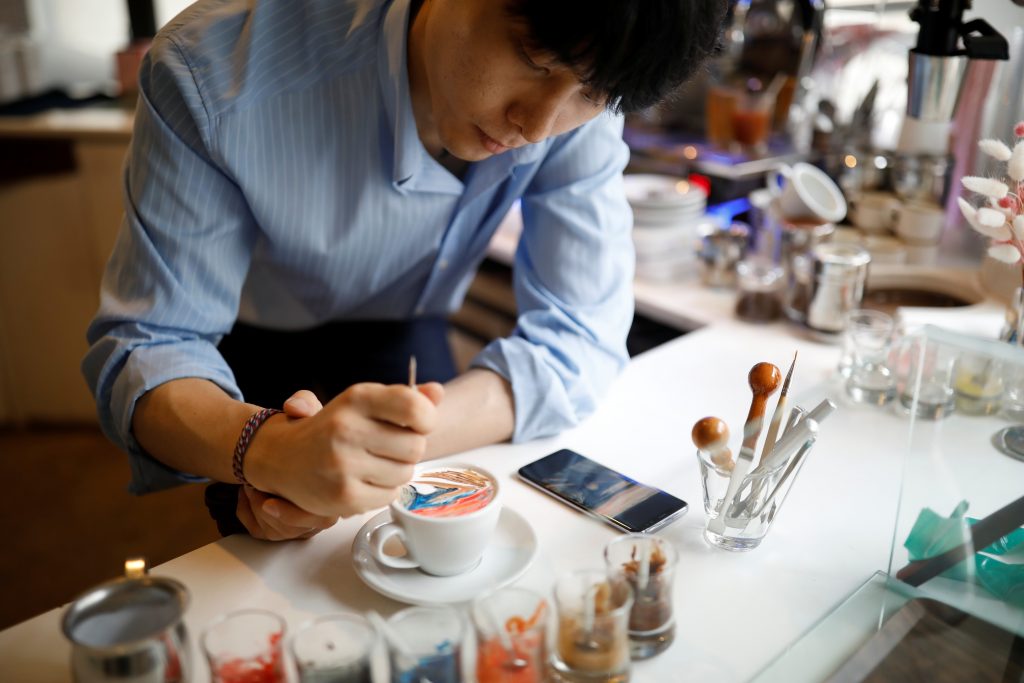 “Korean society does not allow for failure,” she said.

Moon’s dependence on the chaebols was symbolized by the big business retinue that accompanied him to the Trump summit. To rebuff accusations that the Korea-U.S.​ Free Trade Agreement (KORUS) ​is​ one sided against the United States, the business executives came with promises​ to expand South Korea’s already formidable direct investment across America.

Even after 60-plus years of a fragile peace, South Koreans are fully aware that their efforts to build a modern society and economy ​are constantly​ at risk of being turned quickly again into rubble, by accidents, blunders and miscues from as close as North Korea and as far away as Washington.

As analyst Kim observed, South Korea is a country of rapid changes.
​ ​
President Moon has a five-year term, but realistically he has maybe only months to show he can induce ​peaceful ​changes from the regime in the North or offer better jobs to the impatient youth of his country ​amid a still sluggish world economy.

But as much as modern South Korea symbolizes rapid change, most visibly embodied in the spread of its pop culture through Asia, it is still rooted in centuries and millennia of cultural traditions, the kind on display in art and history museums. T

Those museums also reflect a saga ​of rising and falling dynasties, wars, invasions and colonization. Even after 60-plus years of a fragile peace, South Koreans are fully aware that their efforts to build a modern society and economy ​are constantly​ at risk of being turned quickly again into rubble, by accidents, blunders and miscues from as close as North Korea and as far away as Washington.