Kim Jong Un is dangerous and a risk-taker, but not a ‘madman,’ analysts say

Sen. John McCain, R-Ariz., has called Kim Jong Un “crazy.” U.S. Ambassador to the United Nations Nikki Haley said, “We are not dealing with a rational person.” And President Donald Trump said of Kim: He is “obviously a madman.”

Kim Jong Un of North Korea, who is obviously a madman who doesn't mind starving or killing his people, will be tested like never before!

But despite the labels, some experts on North Korea say Kim’s actions may be coming from a more calculated and strategic place than many realize.

North Korea’s hydrogen bomb test, missile launches and threats of nuclear attacks come from a government hampered by sanctions and a leader who uses propaganda and force to secure worship from his people. He’s reportedly executed top officials, even family members, and imprisoned political opponents — maintaining a vise grip on power while not being legally old enough to run for president of the United States or neighboring South Korea.

Some outside officials do believe the young dictator is highly unpredictable, irrational and on a quest for armed conflict.

But others say Kim may be projecting an unstable demeanor, reminiscent of Nixon’s “Madman Theory,” in order to keep foreign leaders off balance.

So which is it? Is Kim’s behavior rooted in strategy? What do world leaders make of these latest threats? And how should they move forward toward a solution?

“[D]espite the popular notion that Kim Jong Un is crazy and a cult personality — I mean he is bombastic and brazen, but he’s rather rational from North Korea’s perspective,” Soojin Park, former deputy spokesperson for the South Korean Ministry of Unification from 2011 to 2016, told the PBS NewsHour. Park insists Kim is “anything but suicidal” and that “his primary goal is to safeguard his regime and himself.”

Nicholas Eberstadt, a researcher at the American Enterprise Institute who studies international security on the Korean peninsula, said he wasn’t surprised by North Korea’s sixth nuclear test. “In its own way, it’s a very logical progression,” Eberstadt said.

One of the intended effects is to establish new international norms by “normalizing the notion of North Korean nuclear threats,” he said. “What we’re getting used to now — and this is only a forecast of more to come — is the routine use of nuclear threats in North Korean diplomatic language.”

The rationale for investing in nuclear weapons

Experts say there are both strictly practical and broadly strategic reasons steeped in psychology and game theory for North Korea’s nuclear and missile tests.

“Besides technical advances to be tested and demonstrated, it is also sending a message to the international community — mostly to the U.S. — that it will not be cowed by sanctions,” Park wrote in an email. “North Korea appears determined to complete its nuclear and missile program and to acquire capabilities for what it claims [is] ‘deterrence’ against the U.S. Being a de facto nuclear power would also put it in a better position if and when the negotiations take place in the future.”

Plus, they don’t have many options, Eberstadt said.

“With the collapse of the Soviet Union and all of that support, with the disintegration of the North Korean industrial infrastructure and the famine 20 years ago, with the increasingly unattractive face that North Korea presents the world as compared to where other countries are orbiting — one of the very few cards that the North Korean government can hope to play is this nuclear and missile card.” 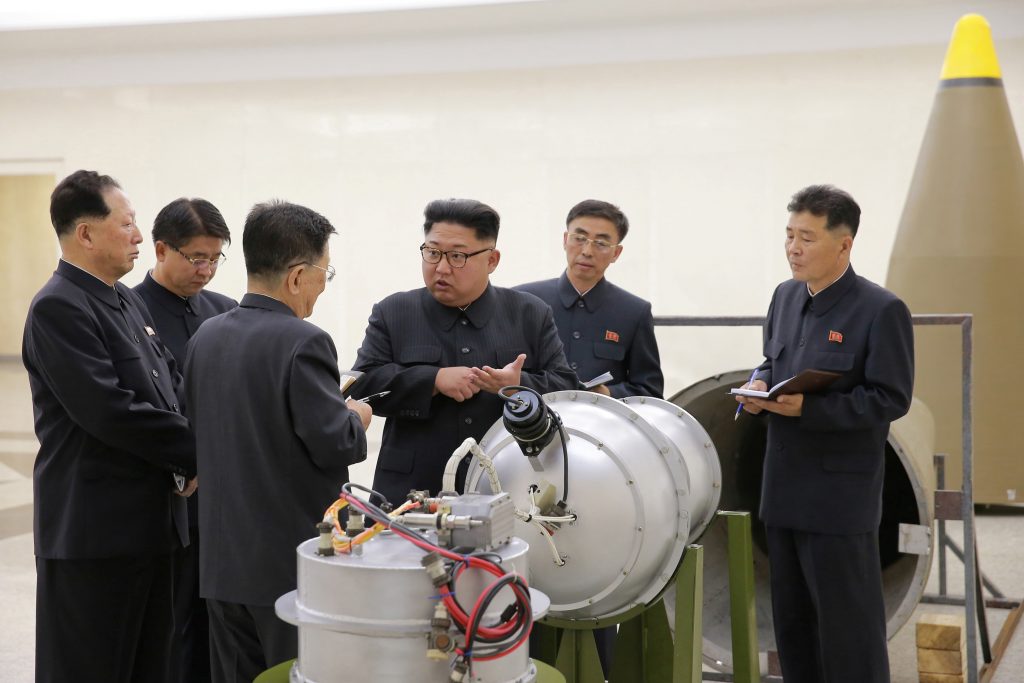 North Korea’s GDP of $28.5 billion is minuscule compared to South Korea’s $1.34 trillion. At $52.1 billion, North Dakota’s GDP is nearly twice the size of North Korea’s. To compensate and gain tactical advantage, Kim invests in unconventional methods of war — nuclear weapons and cyber warfare — rather than more conventional methods, like jets and warships. This allows Kim to punch above his weight on the world stage, affording him formidable deterrence and negotiating leverage, said Michael Madden, founder and director of NK Leadership Watch, an analysis website focused on the North Korean regime and culture.

“[S]mall countries like North Korea that have nuclear weapons are not going to be invaded militarily,” Madden said. “And that’s the raison d’être behind their nuclear weapons program. It’s perfectly rational.”

But it’s not cheap. A modest economic recovery, China-based networks, as well as illicit activity, ranging from insurance fraud to human trafficking, may be allowing Kim to steadily pursue this costly weapons program, despite a lack of trade.

Madden said that less micromanagement has spurred limited growth and that Pak Pong Ju, North Korea’s prime minister, implemented relaxed market rules allowing, for example, “the agricultural policy in which state-owned farms can sell their surplus or sell what they want to local markets.”

And many underestimate the North Koreans’ intelligence, Madden said. The regime meticulously studies history and points to Muammar Gaddafi as an example of a dictator who agreed to abandon his nuclear weapons program in 2003, only to be toppled by NATO and Libyan rebels in 2011.

How much weight should North Korea’s rhetoric get?

After the most recent verbal volleys between Trump and Kim, North Korean Foreign Minister Ri Yong Ho claimed that the U.S. president’s words amounted to a “declaration of war.”

He further asserted the right for Pyongyang to “shoot down United States strategic bombers even when they are not inside the airspace” of North Korea. 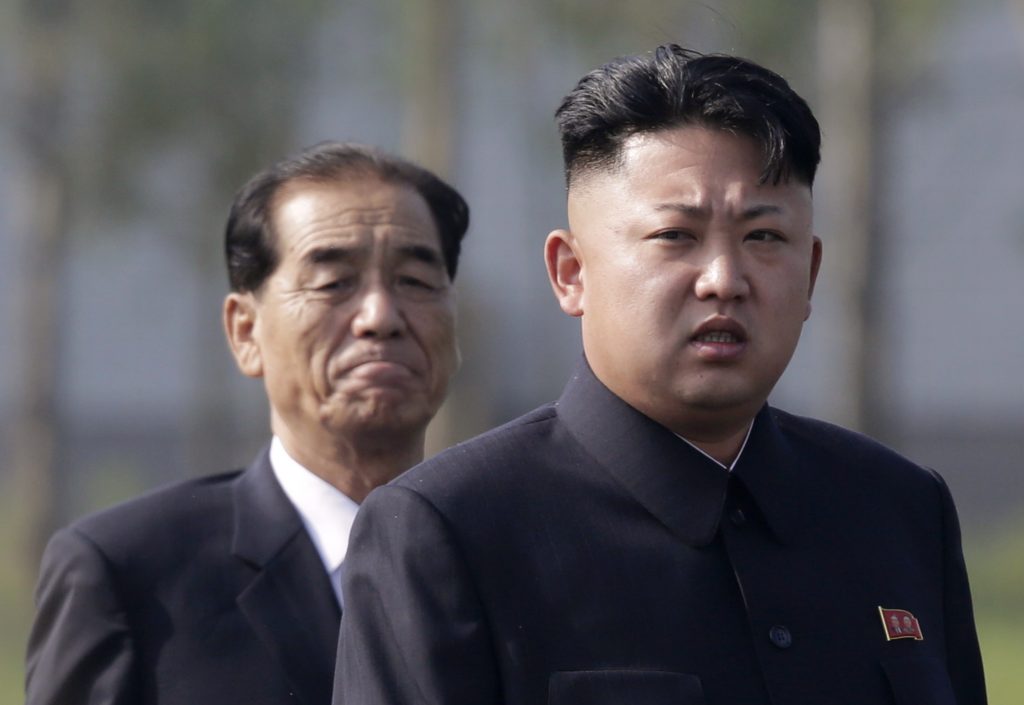 Eberstadt isn’t convinced this heightened rhetoric holds weight. “This is right out of the long-standing North Korean shakedown playbook,” he said. “It’s exactly the same sort of approach that they’ve used in the past in different sorts of manufactured crises, it’s just that now they’ve got more of a nuclear and ballistic threat to back it up.”

Another concern is North Korea’s threat to test a nuclear weapon over the Pacific Ocean, rather than underground. But Eberstadt said he does not believe Pyongyang is prepared for the international backlash.

“A nuclear test over the Pacific is a very big move. I’m not sure that they’re ready for that, because that would bring all sorts of international actors to bear on North Korea who are not really involved at the moment.”

So what can U.S. and other international leaders do?

Considering how vital the North Korean nuclear program is to the security of Kim’s dictatorship, future negotiations and national pride, many analysts think that a solution involving denuclearization is a nonstarter and that more tests are imminent.

“A DPRK nuclear test is always a matter of when, not if,” Madden wrote in an email to the NewsHour.

While Eberstadt believes that intensifying sanctions on those who do business with Pyongyang could prove successful, he said, “In the long run, the North Korean nuclear problem is the North Korean regime.”

Scaling back the joint military exercises between the U.S. and South Korea, for example, could “soften North Korea up to some kind of agreement,” Madden said.

There are many competing proposals to resolve the standoff with Pyongyang, but ultimately, Madden believes diplomacy will win out.

“At a certain point, this is like a combination lock. Eventually, they’re gonna turn and get the right combination.”