Analysis: Should the U.S. set a ‘red line’ for North Korea?

North Korea fired a missile that crossed over Japan before landing in the sea on Tuesday. Pyongyang called it the “first step” in its military operations in the Pacific.

Following the test, President Donald Trump tweeted Wednesday that “Talking is not the answer.”

The U.S. has been talking to North Korea, and paying them extortion money, for 25 years. Talking is not the answer!

However, when asked about the president’s reaction, Secretary of Defense James Mattis told reporters at the Pentagon, “We’re never out of diplomatic solutions.”

We asked several analysts about whether the U.S. should draw a “red line” for North Korea and what its latest missile test means.

Should the U.S. draw a “red line” for North Korea?

Ryan Hass, a fellow in the foreign policy program at Brookings: 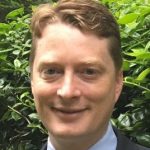 Drawing “red lines” for North Korea would be ill advised. For one, “red lines” imply a certain automaticity of response without regard for situational factors that cannot be accounted for in advance. Drawing “red lines” also implies that any North Korean action just short of the line would be viewed as tolerable and unlikely to elicit a sharp U.S. response, thus creating an unintended dynamic of signaling that certain North Korean provocations would be acceptable as long as they didn’t cross the “red line.” In this sense, a certain degree of strategic ambiguity serves the interest of sobering North Korean behavior.

Rather than publicly articulating a “red line,” the better focus of U.S. government attention would be to forge strong internal clarity on what top national interests it must protect on the Korean Peninsula. In the case of North Korea, the United States should concentrate on protecting the U.S. homeland against attack or blackmail of an attack, preventing proliferation of nuclear or missile technology from North Korea, upholding the credibility of alliance commitments, and preventing war. Protecting these top interests should be the focus of U.S. efforts, not defending an arbitrary line and thereby creating expectations of an automatic and overwhelming response if the arbitrary line is crossed.

Lisa Collins, a fellow with the Korea Chair at the Center for Strategic and International Studies: 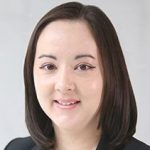 I think it’s very dangerous for anyone to draw “red lines” with North Korea, because it’s probably going to cross the “red line.” I don’t think we should draw lines, especially when it comes to military action … that would force the United States to respond in a way that would be disastrous for the region and for all of the allies, South Korea and Japan.

Has the number of missile tests increased under Kim Jong-un, or does it just seem that way? 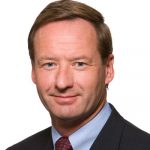 During Kim Jong-un’s era, North Korea has exponentially increased the number and rate of its missile launches. In 2017 alone, North Korea has already launched more missiles than previous leader Kim Jong-il did in the entirety of his 17 years in power. Analysts differ on whether the increased rate is due to the culmination of several long-standing missile programs or to Kim Jong-un’s persona of being less willing to engage in negotiations than his father.

North Korea had previously launched missiles over Japan in 1998 and 2009 but more recently refrained from doing so. While the Hwasong-12 (and other North Korean missiles) had been tested in high parabolic trajectory flights simulating longer-range flights, it would be technologically necessary to fly the missile to its full-range (requiring flying over to Japan) prior to deploying it to North Korean units. Flying over Japan can also serve North Korean political purposes by demonstrating regime resolve and willingness to stand up to U.S. pressure.

Kim Jong-un has done more than twice as many missile tests — about 98 — in his five years of rule than his father Kim Jong-il did — about 47 — in 17 years of rule.

View data of the missile tests: 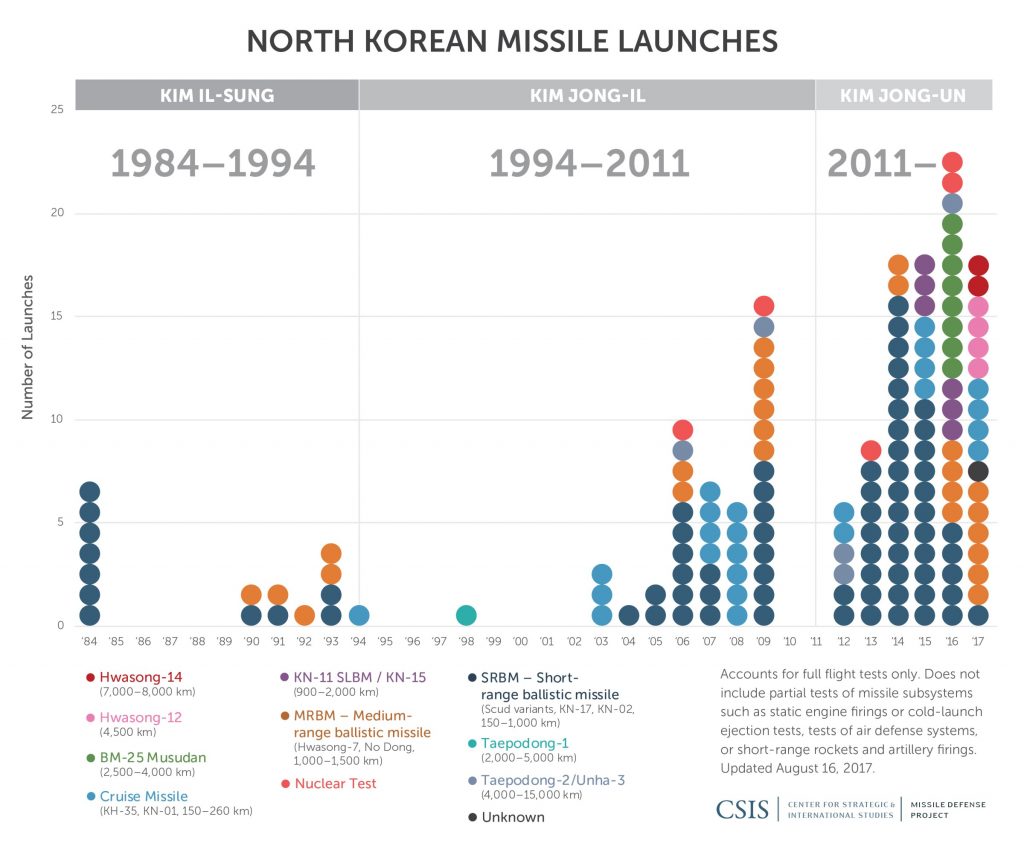 What was the purpose of the missile launch?

Christopher Harmer, senior Naval analyst at the Institute for the Study of War: 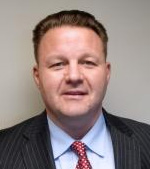 The North Korean (DPRK) test firings seem carefully calibrated to cause the maximum amount of media coverage and verbal response from the U.S. and our allies, while falling short of actions that would cross a U.S. “red line” and demand a U.S. economic response in the form of sanctions or military response in the form of targeted strikes. The Kim Jong-un regime has acted recklessly, irresponsibly and provocatively, but with just enough restraint to give U.S. policymakers an option to respond with rhetoric condemning the missile tests, rather than actual policy action.

The missile that crossed over Japan is a perfect example of this. Firing a ballistic missile over Japan is deeply irresponsible, but the flight path chosen by DPRK was over Hokkaido. Hokkaido is the northernmost major island in Japan, the least densely populated, and far away from the major U.S. bases in Japan. If the DPRK were to launch a missile that traveled directly over Tokyo or major U.S. military bases, policymakers would be forced to respond. By choosing the flight path they did, DPRK gave the U.S. and Japanese policymakers an out. 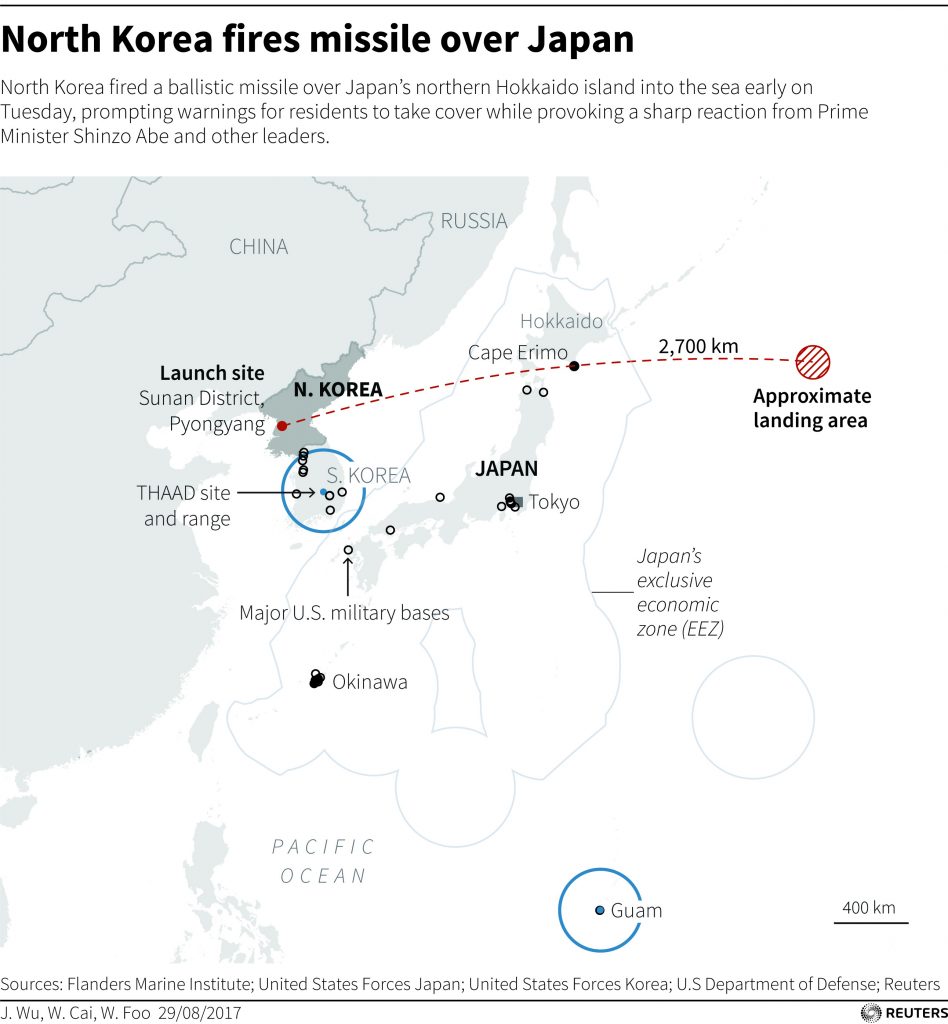 What message was North Korea sending?

I think it probably was a message to the U.S., to China, and to Japan and South Korea all at the same time. I think the message to the U.S. was probably that it wasn’t very happy about the sanctions that were recently imposed both in the United Nations and the unilateral sanctions imposed by the United States through the Treasury Department. There are some experts who believe that North Korea is also trying to coerce the United States into stopping flights of B-1B bombers and other bombers from Guam over the Korean Peninsula.

In terms of China, I think North Korea probably wasn’t very happy about China’s vote in the U.N. Security Council for the sanctions, so it might have been trying to put China in a very difficult position by launching a missile over Japan, saying “we won’t be pushed around.”

Left: A missile is launched during a long and medium-range ballistic rocket launch drill in this undated photo released by North Korea's Korean Central News Agency in Pyongyang on Aug. 30. KCNA photo via Reuters