Analysis: Why Brexit isn’t all that different from the wall fight

As an American living in the U.K., I can’t help but notice the similarities between British Prime Minister Theresa May’s effort to deliver Brexit and President Donald Trump’s initiative to build the wall — and the way they’ve both led to political impasses without clear resolutions.

The gridlock in Westminster, home to the prime minister’s residence and Houses of Parliament, is as acute as it is in Washington. More than two and a half years after British voters voted to exit the European Union by a margin of 52 percent to 48 percent, British politicians have been unable to agree amongst themselves on the details of the country’s departure, and they’ve only got two and half months left to do it. That’s not much time when you’re dealing with 27 other countries from a political and economic block you’ve spent the last 45 years in and don’t have any consensus amongst your own ranks.

Legislative branches on both sides of the pond are fighting back.

In the U.K., the sitting government normally commands a majority in the parliament, so rejection doesn’t happen that often. Conservative Party leader May’s plan was defeated by 432 to 202 votes, the biggest margin — 230 votes — ever in modern British history.

You have to go back all the way to 1924 for the next biggest defeat, when the country’s parliamentarians roundly rejected — by a margin of 160 votes — the then-government’s decision to abandon a criminal investigation into the head of a Communist party newspaper. The Red Scare was still running high in the U.K. at the time and the fear was that the government itself might be under the influence of Moscow. In an echo of history, today’s Washington and Westminster 94 years ago don’t feel all that dissimilar.

Much as Trump is boxed in by his base’s support of his campaign promise to build a physical barrier across the southern border, May is politically limited by the division in her own party over the best path for Brexit. And the impasse could only grow.

The British Parliament even passed something akin to an American-style shutdown plan — albeit of a much smaller scale — that would starve the government of some funds should it fail to win Parliament’s support for a deal before the March 29, 2019 deadline. Economists and many parliamentarians fear that if the U.K. was to exit the E.U. without a deal with the block of 27 countries, the British economy could fall into recession or worse.

Legislative branches on both sides of the pond are fighting back. May’s almost unchecked power to negotiate the U.K.’s exit on her own accord is waning. Six months ago, Parliament demanded — over the PM’s objections — that they get a chance to vote on her deal with the E.U. After she lost that vote on Tuesday, Parliament has even more power to dictate what happens next.

Meanwhile in the U.S., Democrats have held out against Trump’s demand. Senate Majority Leader Mitch McConnell hasn’t allowed a vote to move forward in the Senate on a “clean” funding bill to reopen the government without funding the wall.

WATCH: Parliament rejects Brexit deal, leaving May to scramble for a plan B

One way that May might be able to break that deadlock is to agree that, while leaving the E.U., the U.K. would remain in a customs union, an option that could win enough support. Alas, that would violate one of May’s “red lines.” The day after her defeat, she appears to be ruling that out. Hmm…that feels a little like Trump’s rhetoric on the wall.

It’s not just reluctance toward concessions that unite the two leaders. While Trump recently walked out of a meeting with Democrats, the British prime minister only offered to sit down with the other parties to hear what they are prepared to support after she both lost her vote and narrowly survived a no-confidence vote by a margin of 325 votes to 306 on Wednesday. Jeremy Corbyn, the leader of the opposition Labour Party, said he will only do so after she agrees to set aside her “red lines” on the deal.

Distrust between Britain’s leading parties couldn’t be higher. One pregnant member of Parliament from the Labour side postponed the birth of her child via caesarean section in order to attend Tuesday’s high-stakes vote. A long-standing practice where the opposing party withholds one of its votes if a member of the other can’t attend because of extenuating circumstances, known as the pairing system, just wasn’t reassuring enough.

“If the pairing system is not honoured, there’s nothing I can do, and it’s going to be a very close vote,” MP Tulip Siddiq told the Evening Standard.

Of course, the tally was not close in the end, but she cast her vote in a wheelchair and she did it against doctor’s advice.

“If my son enters the world even one day later than the doctors advised, but it’s a world with a better chance of a strong relationship between Britain and Europe, then that’s worth fighting for,” Saddiq said. 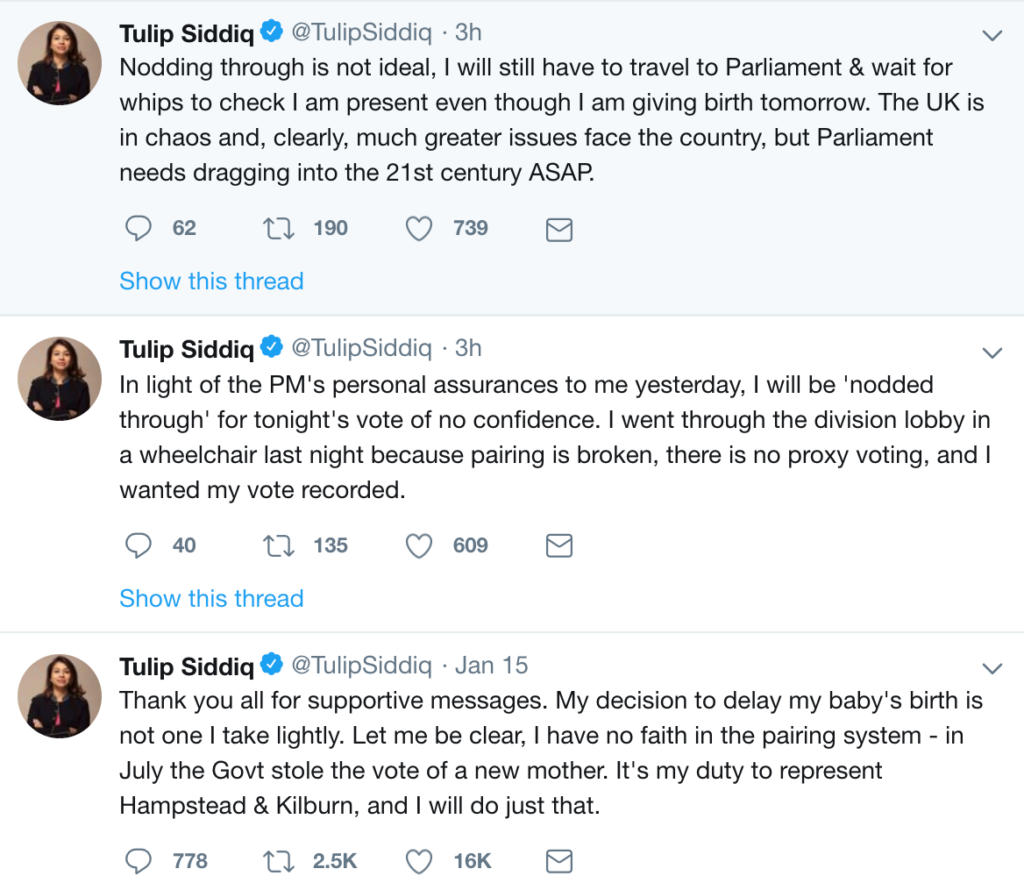 Democrats like Senate Minority Leader Chuck Schumer have pointed to the U.S. president as the source of their distrust, after Trump torpedoed a deal in mid-December to fund the government in order to take a hard line on the wall.

There are notable differences when making this comparison. While Republicans have largely lined up behind Trump (with some offering proposals to end the shutdown, but no open mutiny), the legislators in May’s party defied her this week. Of the 317 Conservatives in Parliament, nearly 120 of them voted against her deal. Some said it didn’t go far enough in severing the U.K.’s relationship with the E.U.; others said it went too far.

Support for and against Brexit cuts across party lines. Many Conservative-leaning — and Labour-leaning, for that matter — strongholds voted to remain in the E.U. and vice versa, and representatives are bound by a duty to their constituency.

READ MORE: Majority of Americans blame Trump for the shutdown

Parliamentarians’ personal views are also a factor. A majority of the Conservatives who won seats in the last parliamentary election in 2017 voted to remain in the European Union when they cast their ballots along with the rest of the electorate in the referendum in 2016, according to an analysis carried out by the Financial Times. Some of them believe they have a duty to voters to take the U.K. out of the E.U. against their own personal convictions.

May, who incidentally also voted for the U.K. to remain in the E.U. in the referendum, needs the members of her own party on board to get her deal through. Last month, a group of Conservative rebels tried, but failed to oust her. On Wednesday, it was deja vu despite the Brexit deal shellacking: May survived the no-confidence vote in Parliament. But make no mistake: Such fights diminish May’s political power, and if there’s no clear plan to resolve the U.S. shutdown soon, Trump may find the same.

Parliament rejects Brexit deal, leaving May to scramble for a plan B