As President Barack Obama concluded his Latin America trip in Argentina this week, he sought to mend one of the U.S.’s most historically troubled relationships in the region involving the rise of a brutal military regime.

On the 40th anniversary of Argentina’s 1976 military coup, Obama announced the declassification of documents involving the regime’s effort to silence their leftist opposition which resulted in the disappearance of as many as 30,000 people.

Juan Mandelbaum, an Argentine filmmaker who directed and produced the 2008 documentary “Our Disappeared/Nuestros Desaparecidos“, said the declassified documents could potentially provide victims’ families with answers. But, he said, Argentina must not forget those they lost — many kidnapped, tortured, drugged and then thrown alive into Buenos Aires’ Rio de la Plata and left to drown. His film tells of his return to Argentina in the 1990s to find his former girlfriend, Patricia Dixon. He soon learned from her remaining family that she was one of the disappeared, murdered by the military for her leftist activism.

“There’s great expectation that these documents may have reference to specific cases of disappeared because there are still thousands of cases of disappeared that are unsolved where we don’t know what happened to those people,” Mandelbaum told the NewsHour via Skype. “Where were they taken? When were they killed? We just don’t know and that’s a huge void for all of the relatives and friends of the people who disappeared.” 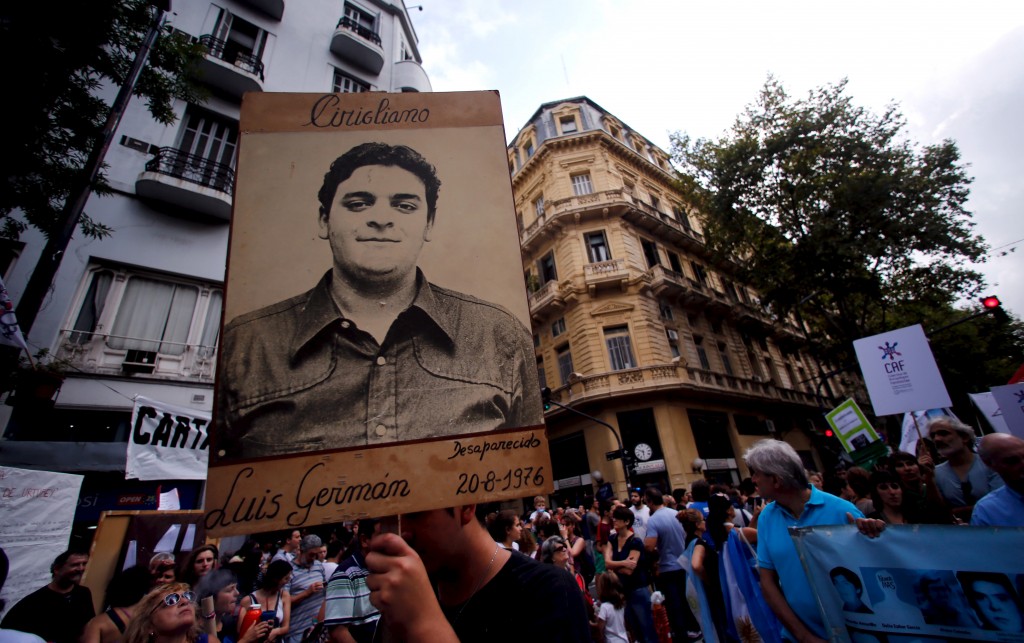 A man holds a portrait of Luis German Cirigliano, who disappeared during Argentina’s “Dirty War,” during a demonstration to commemorate the 40th anniversary of the 1976 military coup in Buenos Aires Thursday. Photo by Marcos Brindicci/Reuters

As President Obama met Argentina’s recently elected right-wing President Mauricio Macri in Buenos Aires Wednesday and then traveled to the southern city of Bariloche Thursday, thousands marched in the yearly remembrance for the more than 30,000 loved ones they lost during the nine years of terror. However, this year many also marched against Obama’s visit, protesting the presence of a U.S. leader in Argentina the week of the anniversary.

Previously declassified files by the U.S. government in 2002 included a transcript of former U.S. Secretary of State Henry Kissinger in June 1976 telling the Argentine generals, “If there are things that have to be done, you should do them quickly.”

While Argentina continues to be divided politically, much of it regarding how to deal with the human rights violations committed by the military junta, Mandelbaum said “there is a hope that is in the next generation” of Argentines that by remembering the disappeared, they will be better able to help heal the scarred nation for their children.