Around the Nation: Coverage of the Joplin Tornado 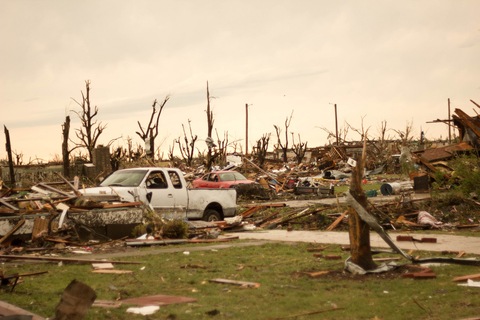 KSMU, based in Springfield, Mo., about 70 miles away from Joplin, has been keeping listeners and readers updated with information about how they can help Joplin residents by donating blankets or offering nursing services.

When the tornado hit St. John’s Regional Medical Center, it sent medical records flying. As KSMU reported: “Residents in towns as far away as Bolivar and Springfield have reported finding X-Rays and other records in their yards.” Hospital officials are now asking people to return any records they find that might have come from the medical center.

Reporter Cathy Tatom of Oklahoma’s OETA talked with survivors on Monday as they picked through their belongings. One woman managed to find her wedding ring — where her bathroom used to be.

St. Louis Public Radio has been updating their blog as news about the Joplin recovery efforts becomes available.

KPBS’s Home Post blog covers the National Guard, which has been called up to help search and rescue efforts in Joplin.

While Joplin bore the worst of the weekend’s storms, tornadoes also touched down in Kansas and Minnesota.

On Monday, Kansas Gov. Sam Brownback toured the town of Reading, where a tornado killed one man and left several other residents homeless. Kansas City’s KCUR reports on the clean-up efforts and recovery process in the southeastern Kansas town.

In Minnesota, a tornado injured 48 and killed one resident when it touched down in Minneapolis. Listen to a conversation from Minnesota Public Radio about this season’s big storms: