SAN MIGUEL LOS LOTES, Guatemala — Troublesome rain and more volcanic activity are hindering search and rescue efforts around Guatemala’s Volcano of Fire, but when teams have been able to work in the hardest hit areas the death toll has continued to rise.

Efforts were cut short again Wednesday when a downpour forced teams to retreat for fear of mudslides. Boiling water flowing down the volcano’s slopes from dangerously hot volcanic gas and ash also posed a threat. A day earlier, flows of super-heated volcanic material forced crews to pull back. 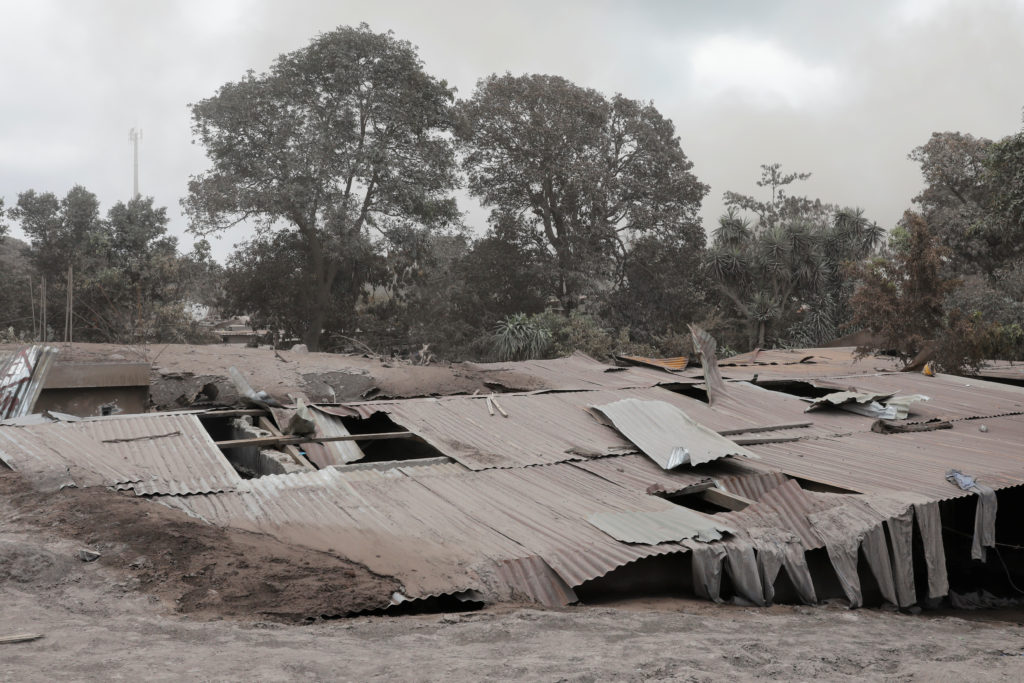 A view of an area affected by the eruption of the Fuego volcano at El Rodeo in Escuintla, Guatemala June 6. Photo by Carlos Jasso/Reuters

But between stoppages, search teams working with shovels and heavy equipment found more bodies from Sunday’s big eruption. Remains were loaded into body bags and carried out on stretchers.

Guatemala’s National Institute of Forensic Sciences raised the death toll to 99 late in afternoon, an increase of 24 bodies for the day. Only 28 of the total had been identified. At least 197 people were listed as missing.

“Nobody is going to be able to get them out or say how many are buried here,” Efrain Suarez said, standing amid the smoking holes dotting what used to be the village of San Miguel Los Lotes on the flanks of the mountain.

“The bodies are already charred,” the 59-year-old truck driver said. “And if heavy machinery comes in they will be torn apart.”

Rescuers poked metal rods into the ground, sending clouds of smoke pouring into the air in a sign of the super-hot temperatures still remaining below the surface, which firefighters said reached as high as 750 to 1,300 degrees Fahrenheit (400 to 700 degrees Celsius) in some places.

A day after a new evacuation was ordered due to increasing activity by the volcano, a red alert remained in place for the departments of Escuintla, Sacatepequez and Chimaltenango, and people were advised not to linger near the affected zones.

The country’s seismology and volcanology institute warned of new flows descending through canyons on the volcano’s western slope toward the Pantaleon River, carrying boulders and tree trunks. 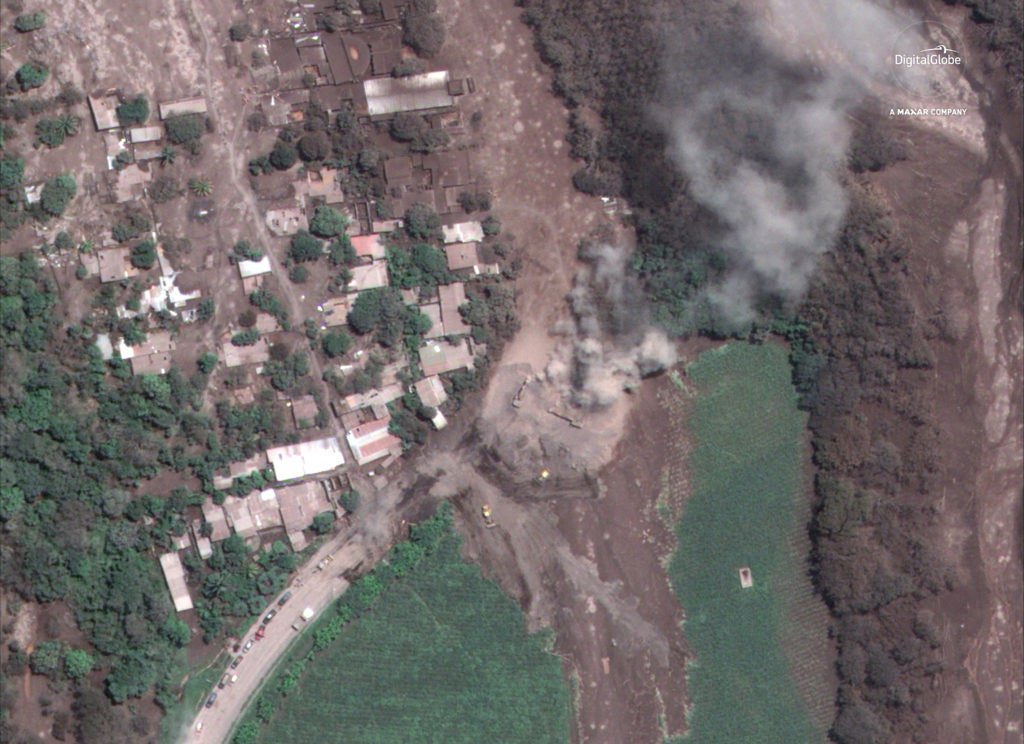 Satellite imagery shows lava flow associated with the eruption of the Feugo Volcano near the village of San Miguel Los Lotes and surrounding area in Guatemala, June 6. Satellite image ©2018 DigitalGlobe, a Maxar company/Handout via Reuters

At a shelter in the Murray D. Lincoln school in the city of Escuintla, about 10 miles (15 kilometers) from the volcano’s peak, Alfonso Castillo said he and his extended family of 30 had lived on a shared plot in San Miguel Los Lotes where each family had its own home.

The volcano is one of Central America’s most active, and everyone was accustomed to rumbling and spewing smoke, so at first nothing seemed unusual Sunday, the 33-year-old farm worker said. But then a huge cloud of ash came pouring out.

“In a matter of three or four minutes the village disappeared,” Castillo said. It was smothered in what he described as a “sea” of muck that came crashing into homes, inundating people, pets and wildlife.

The family holed up in a house that heated up “like a boiler” inside, he said, then made their way onto the roof and then to the upper story of another, concrete home. After a cellphone call to Castillo’s brother, rescuers arrived and took the family to safety.

But the life they knew was gone.

“Nobody wants to go back there. My children say they would rather be in the streets. … There are many people who are helping us, but we have absolutely nothing. We could not get anything out,” Castillo said. “For us, there is no tomorrow.”

In past disasters in which authorities determined there was no chance of finding survivors and further efforts to recover bodies would be too difficult, areas have been declared burial sites, the final resting place of the victims.

Asked about that possibility, the director of Guatemala’s disaster agency, Sergio Cabanas, said: “Not until the search efforts are over, and it would be left up to the people.”

Left: Relatives of Eric Rivas, 20, who died during the eruption of the Fuego volcano, mourn during his funeral in Alotenango, Guatemala June 6. Photo by Jose Cabezas/Reuters