BRIDGEWATER, N.J. — President Donald Trump is poised to redouble his commitment to “America First” on the most global of stages this week.

In the sequel to his stormy U.N. debut, Trump will stress his dedication to the primacy of U.S. interests while competing with Western allies for an advantage on trade and shining a spotlight on the threat that he says Iran poses to the Middle East and beyond.

One year after Trump stood at the rostrum of the U.N. General Assembly and derided North Korea’s Kim Jong Un as “Rocket Man,” the push to denuclearize the Korean Peninsula is a work in progress, although fears of war have given way to hopes for rapprochement.

Scores of world leaders, even those representing America’s closest friends, remain wary of Trump. In the 12 months since his last visit to the U.N., the president has jolted the global status quo by pulling out of the Iran nuclear deal, starting trade conflicts with China and the West and embracing Russia’s Vladimir Putin even as the investigation into the U.S. president’s ties to Moscow moves closer to the Oval Office.

Long critical of the United Nations, Trump delivered a warning shot ahead of his arrival by declaring that the world body had “not lived up to” its potential.

“It’s always been surprising to me that more things aren’t resolved,” Trump said in a weekend video message, “because you have all of these countries getting together in one location but it doesn’t seem to get there. I think it will.” 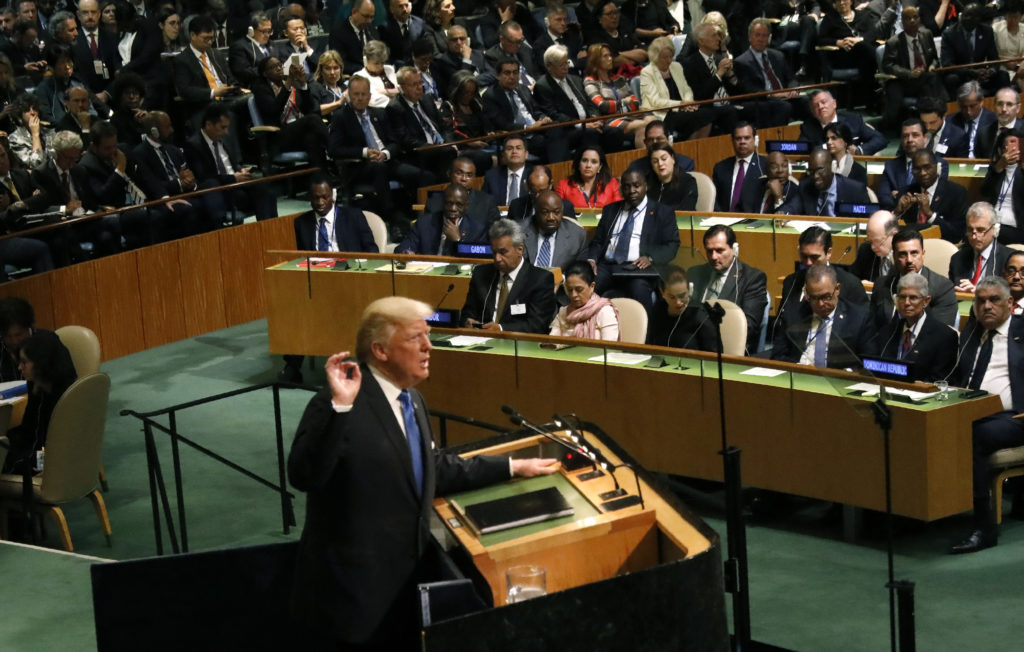 If there is a throughline to the still-evolving Trump doctrine on foreign policy, it is that the president will not subordinate American interests on the world stage, whether for economic, military or political gain.

Nikki Haley, the U.S. ambassador to the United Nations, told reporters in a preview of Trump’s visit, that the president’s focus “will be very much on the United States,” its role and the relations it wants to build.

“He is looking forward to talking about foreign policy successes the United States has had over the past year and where we’re going to go from here,” she said. “He wants to talk about protecting U.S. sovereignty,” while building relationships with nations that “share those values.”

In his four-day visit to New York, Trump will deliver major speeches and met with representatives of a world order that he has so often upended in the past year. Like a year ago, North Korea’s nuclear threat will hover over the gathering, though its shadow may appear somewhat less ominous.

The nuclear threat was sure to be on the agenda at Trump’s first meeting, a dinner with Japanese Prime Minister Shinzo Abe in Manhattan on Sunday night. Abe stands first among world leaders in cultivating a close relationship with the president through displays of flattery that he has used to advance his efforts to influence the unpredictable American leader.

On Monday afternoon, Trump planned to sit down with South Korean President Moon Jae-in, who comes bearing a personal message to Trump from North Korea’s Kim after their inter-Korean talks last week. Trump and Moon were expected to sign a new version of the U.S.-South Korean trade agreement, one of Trump’s first successes in his effort to renegotiate trade deals on more favorable terms for the U.S.

Even so, some U.S. officials worry that South Korea’s eagerness to restore relations with the North could reduce sanctions pressure on Kim’s government, hampering efforts to negotiate a nuclear accord.

“We have our eyes wide open,” Secretary of State Mike Pompeo told NBC’s “Meet the Press” on Sunday. “There is a long ways to go to get Chairman Kim to live up to the commitment that he made to President Trump and, indeed, to the demands of the world in the U.N. Security Council resolutions to get him to fully denuclearize.”

Trump’s address to the General Assembly comes Tuesday, and on Wednesday he will for the first time chair the Security Council, with the stated topic of non-proliferation of nuclear, chemical and biological weapons. The subject initially was to have been Iran, but that could have allowed Iranian President Hassan Rouhani to attend, creating a potentially awkward situation for the U.S. leader.

Aides say the president will also use the session to discuss North Korea and other proliferation issues. While Trump is not seeking a meeting with Rouhani, he is open to talking with the Iranian leader if Rouhani requests one, administration officials said.

In meetings with European leaders as well as during the Security Council session, Trump plans to try to make the case that global companies are cutting ties with Iran ahead of the reimposition in five weeks of tough sanctions against Tehran. The penalties are a result of Trump’s decision to withdraw the U.S. from the 2015 Iran nuclear deal.

Trump at the time cited Iran’s role as a malign force in the region, particularly its support of terrorist groups, but also its involvement in Syria. U.S. officials say their priority for the region now is removing Iranian forces from Syria.

READ NEXT: What John Bolton could mean for Trump’s foreign policy

Trump is also expected to deliver a fresh warning to Syria’s Bashar al-Assad that the use of chemical weapons against civilians in the major rebel stronghold of Idlib would have serious repercussions. Britain and France are actively planning a military response should Assad use chemical weapons again, according to U.S. officials.

Bolton, like Pompeo, is part of a far more hawkish national security team than the one that surrounded Trump a year ago.

Meetings on the sidelines of the General Assembly often come in rapid succession, a wearying test for even the most experienced foreign policy team. Trump has a robust schedule during his stay in New York, including meetings with Egyptian President Abdel-Fattah el-Sissi, French President Emmanuel Macron, Israeli Prime Minister Benjamin Netanyahu and British Prime Minister Theresa May.

But while some world leaders are still reeling from Trump’s deference to Putin in their summer Helsinki summit, there will not be an encore in New York: The Russian president is not expected to attend the proceedings.