The Basque militant group ETA surrendered its inventory of remaining weapons, ending some 40 years of political violence in southwest France and northern Spain on Saturday as people celebrated in the French city of Bayonne.

ETA, which stands for Euskadi Ta Askatasuna — Basque Country and Freedom — has killed more than 800 people since its attempt to seek its own Basque state under Spanish dictator Francisco Franco. The group had declared a ceasefire in 2011 and has been inactive since then, but had not disarmed.

A mediation group known as the Artisans of Peace organized the handover, passing on a list of coordinates to caches of 120 firearms, three tons of explosives and thousands of rounds of ammunition, according to Reuters. 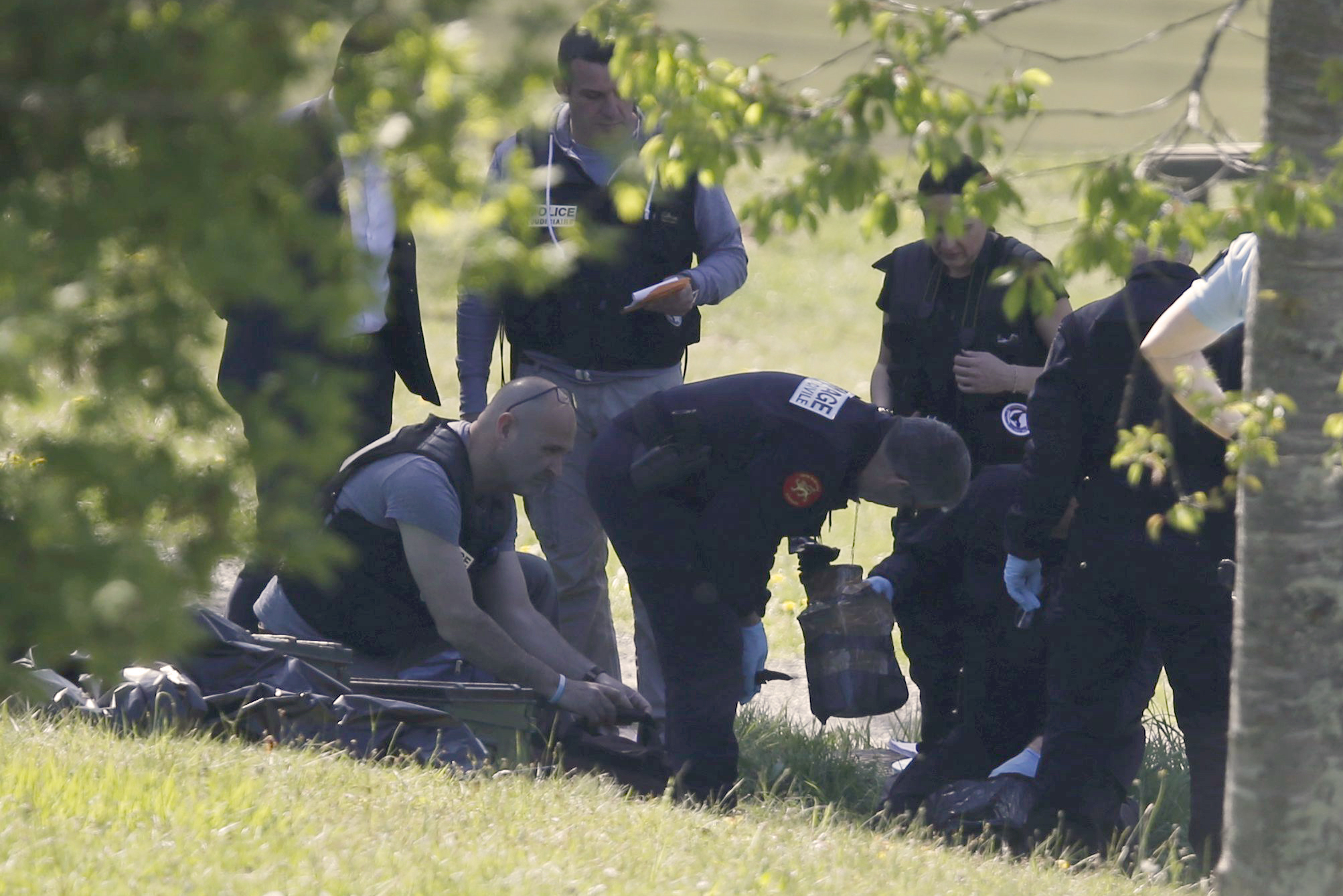 French police officers and bomb-disposal experts are seen during investigations in Saint-Pee-sur-Nivelle near Bayonne, France, April 8, 2017, after Basque militant separatist group ETA passed a list with the location of its arms caches to French authorities ,effectively ending an armed separatist campaign after almost half a century. Photo by Regis Duvignau/Reuters

“We hope that with this the movement can move forward to a long-lasting peace in the Basque country,” activist Mixel Berhokoirigoin said.

Hundreds of people held up Artisans of Peace signs in Bayonne, welcoming the announcement.

People hold up symbols of the “Artisans Of Peace” while attending a rally following the announcement of disarmament by armed separatists ETA in Bayonne, April 8, 2017. Photo by Regis Duvignau/Reuters

Basque student dissidents formed ETA in 1959, but the group’s first known killing was not until 1968. One of its leaders, Xabier Etxebarrieta, shot and killed an officer who had asked for his identification and was killed later by the Spanish Civil Guard, according to The New York Times.

In retaliation, ETA fatally shot Melitón Manzanas, a high-ranking police officer in San Sebastian who opposed Basque nationalism despite being Basque himself.

Etxebarrieta became “the first martyr of the revolution,” wrote Bernardo Atxaga in a 2006 article for The New York Times. People passed out pamphlets after he died, comparing him to Argentine Marxist Che Guevara while promising revenge.

“As of this moment we issue a warning. For us, Txabi Etxebarrieta is worth much more than all the members of the Guardia Civil put together. They have robbed us of him and for that they will be made to pay,” the pamphlet read.

Violence against Franco’s regime ensued and was reciprocated.

In 1973, ETA shifted the course of Spanish history by assassinating Prime Minister Luis Carrero Blanco, Franco’s most likely successor. When Franco died in 1975, Juan Carlos, whose grandfather had been Spain’s last ruling king, took his place.

Fighting with bombings and the Anti-Terrorist Liberation Group, a Spanish paramilitary group, continued until the ETA’s last known killing in 2010.

ETA leader Mikel Kabikoitz Karrera Sarobe was arrested in Normandy that same year, and then in January of 2011 the group declared a ceasefire.

After years of diplomatic attempts to get ETA to hand over its weapons, Artisans of Peace took on the responsibility. 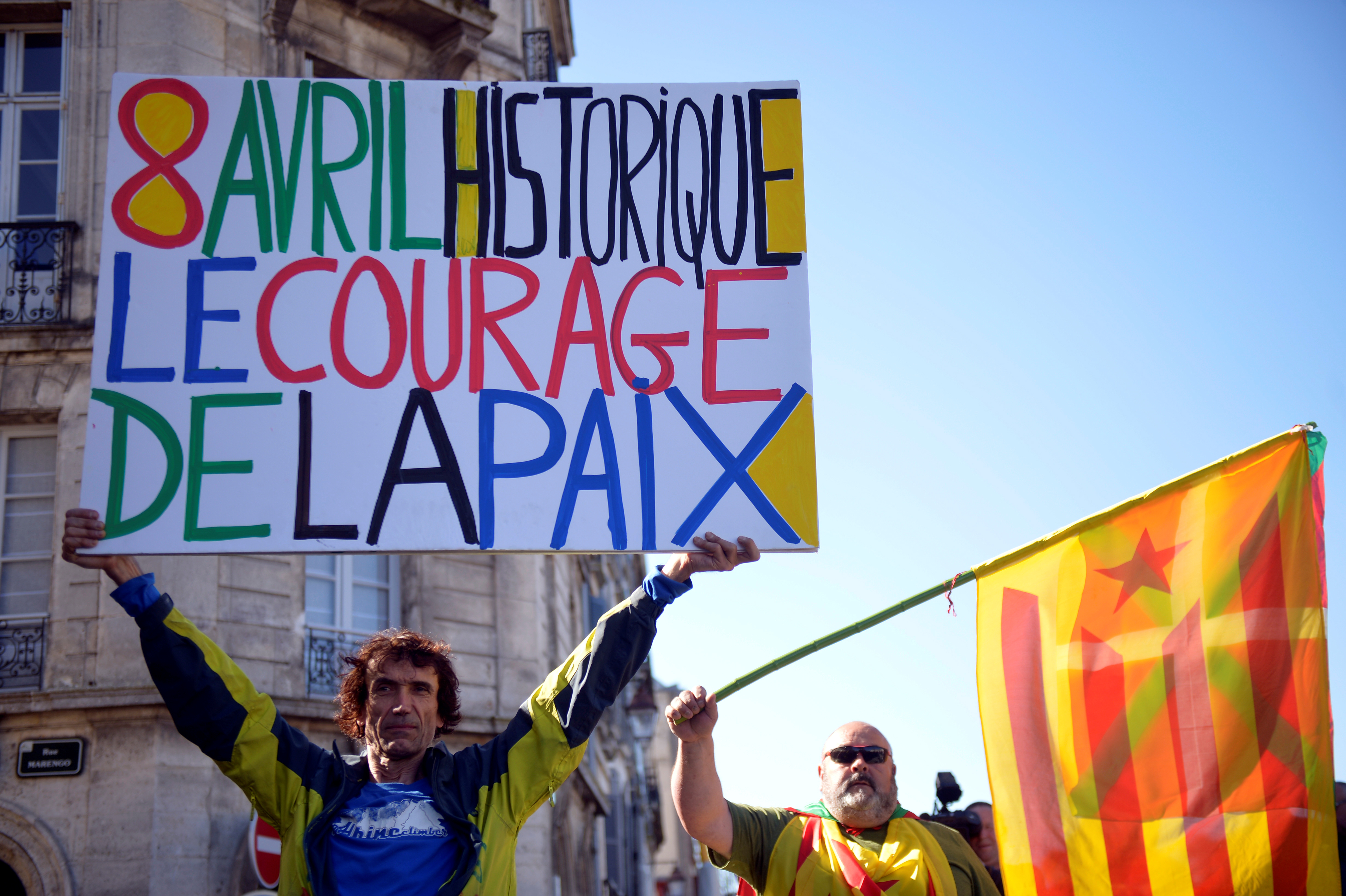 A man holds a that reads “Historic 8th of April. The Courage of Peace”, next to another man with Basque and Catalan flags, following the confirmation of disarmament by Basque separatists ETA in Bayonne April 8, 2017. Photo by Vincent West/Reuters

Spanish government officials said the group still needs to dissolve and apologize to its victims.

“The government will not change its position: terrorists cannot expect favourable treatment… much less impunity for their crimes,” Spanish Prime Minister Mariono Rajoy said in a statement. 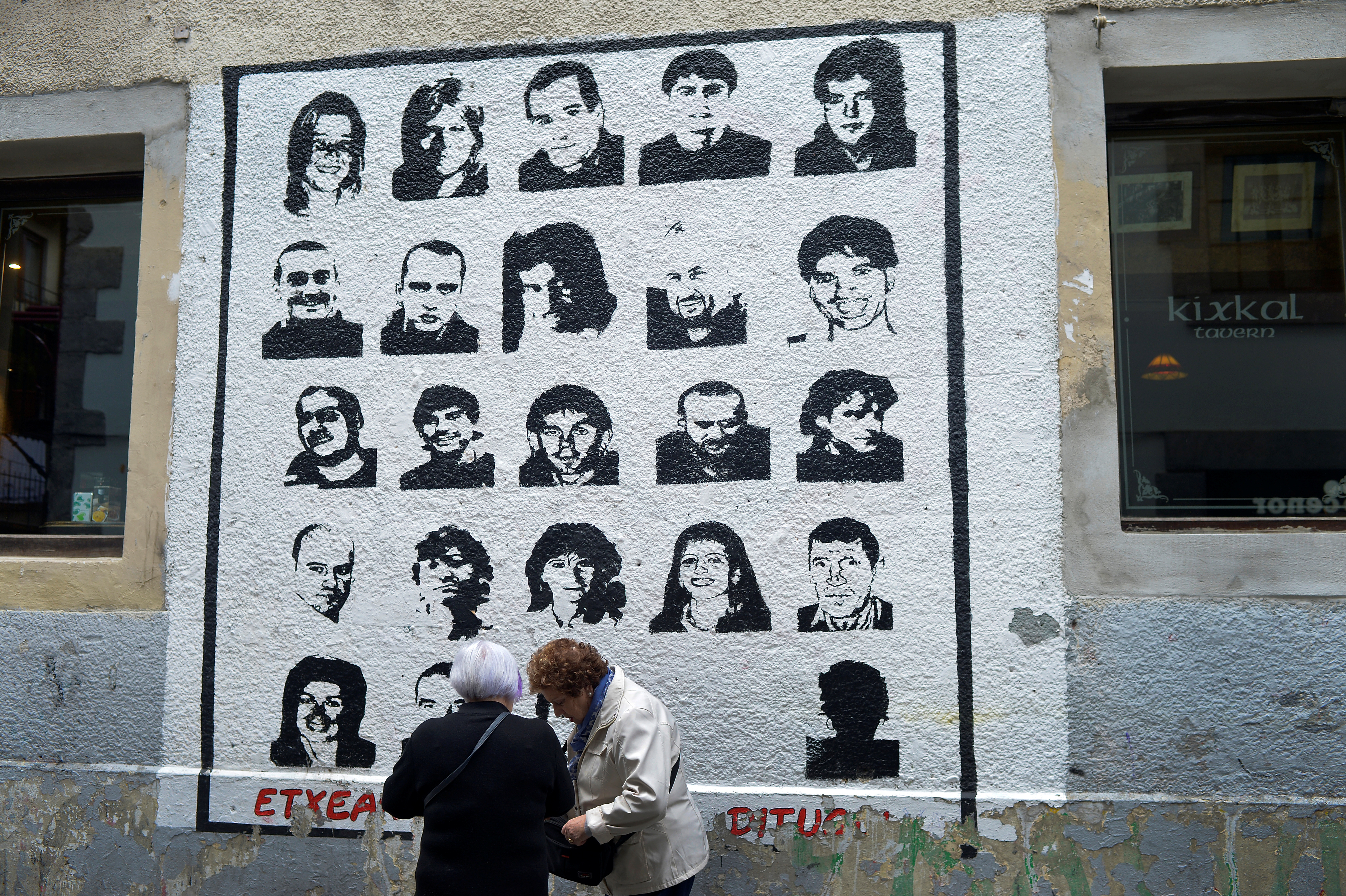 Women speak alongside a mural depicting imprisoned armed Basque group ETA members, under which reads “We Want Them Home”, in the Basque town of Hernani, Spain March 31, 2017. Photo by Vincent West/Reuters

And the leader of Basque pro-independence party EH Bildu Arnaldo Otegi said the ETA needed more resolution, too, pointing out that 300 of its members are still in Spanish and French prisons.

“From today we will put on the table all the problems we still have as a society and a nation,” he said.

Left: People hold up symbols of the "Artisans Of Peace" while attending a rally following the announcement of disarmament by armed separatists ETA in Bayonne, April 8, 2017. Photo by Vincent West/Reuters