Twin explosions carried out by suspected suicide bombers in Ankara, Turkey, killed dozens of people who had assembled in the capital city on Saturday to attend a peace rally.

At least 95 people were killed with 246 people still being treated, the prime minister’s office said in a statement.

Officials said the bombing was the deadliest terror attack in the country’s modern history, the New York Times reported.

The nearly simultaneous explosions targeted pro-Kurdish and leftist activists who had assembled to promote democracy and peace amid renewed clashes between Kurdish rebels and Turkish security forces.

Photographs from the scene showed bloodied bodies covered by multicolored flags and banners demonstrators had brought to the event. 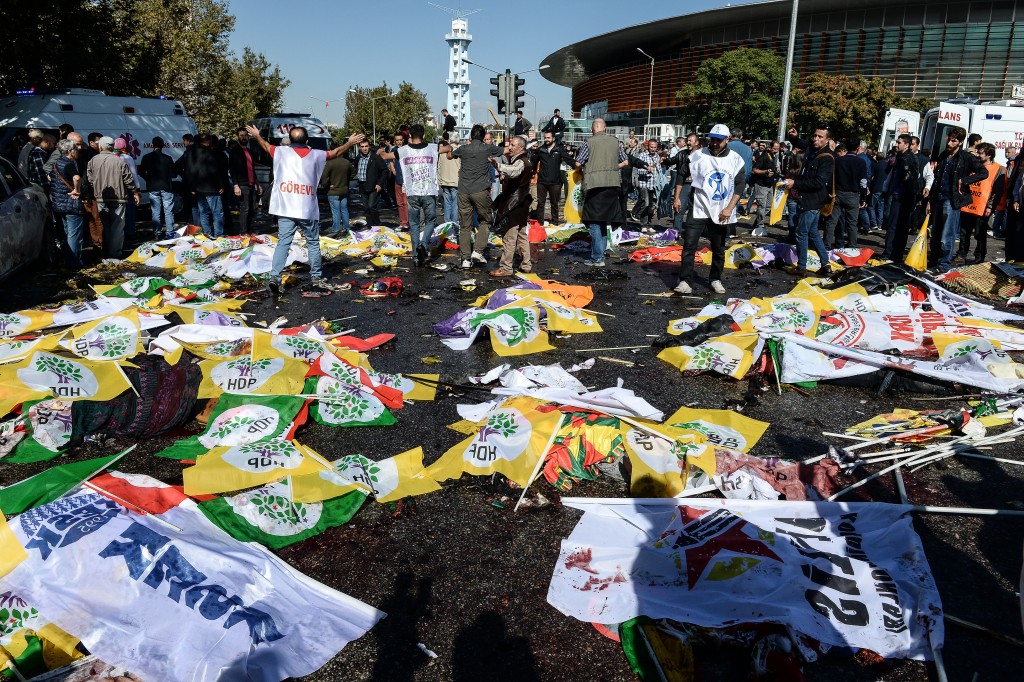 Bodies are covered after an explosion during a peace march in Ankara, Turkey on October 10, 2015. Photo by Gokhan Tan/Getty Images.

Speaking at a press conference, Prime Minister Ahmet Davutoglu told reporters there were “strong signs” that two suicide bombers carried out the attacks. He said Kurdish rebels or Islamic State militants may be behind the bombings, the AP reported.

Davutoglu called for a three-day official period of mourning in the country to remember the victims.

In a statement, the U.S. Department of State strongly condemned the “heinous terrorist attack” carried out against demonstrators in Ankara.

“In light of the ongoing violence in Turkey and the region, it is particularly important at this time that all Turkish citizens recommit to peace and stand together against terror. We stand together in solidarity with the Turkish people and reaffirm our determination to continue to work with Turkey to combat the shared threat of terrorism.”

Turkish President Recep Tayyip Erdogan called for the country to show unity in the face of violence following the bombings on Saturday, the AP reported.

“The greatest and most meaningful response to this attack is the solidarity and determination we will show against it,” he said.

Left: Survivors stand among the dead and injured at the blast scene after an explosion during a peace march in Ankara, Turkey, on October 10, 2015. Photo by Defne Karadeniz/Getty Images.