LONDON — Rescuers found a body in rough seas following an extensive search Saturday off the coast of southeast England, as Britain faced a second straight weekend of wild winter weather and flooding.

The body was discovered by a lifeboat from the Royal National Lifeboat Institution and brought to shore, a spokesman for the local coast guard said.

The RNLI, with the assistance of police and a Royal Navy vessel, had scoured the sea near Margate starting before dawn after a distress call reporting a man overboard. The call is believed to have come from B Gas Margrethe, a 99-meter Maltese tanker that had been anchored off the coast of Margate.

Hurricane-force winds of up to 85 knots (98 mph) and monster waves that could reach over 100-feet-high ((30 meters)) were roaring across the North Atlantic on Saturday, the U.S. National Weather Service’s Ocean Prediction Center said.

The fourth named storm of the season, dubbed Dennis by Britain’s Met Office weather service, was expected to deepen through the weekend. Authorities urging people to take all possible precautions. Hundreds of flights were cancelled.reported.

The Met Office had 22 flood warnings in place around England, which meant flooding was expected. The Irish Meteorologist Service issued a number of wind warnings, saying gusts of up to 120 kilometers per hour (75 mph) might be seen. Gale warnings were also issued in Iceland. 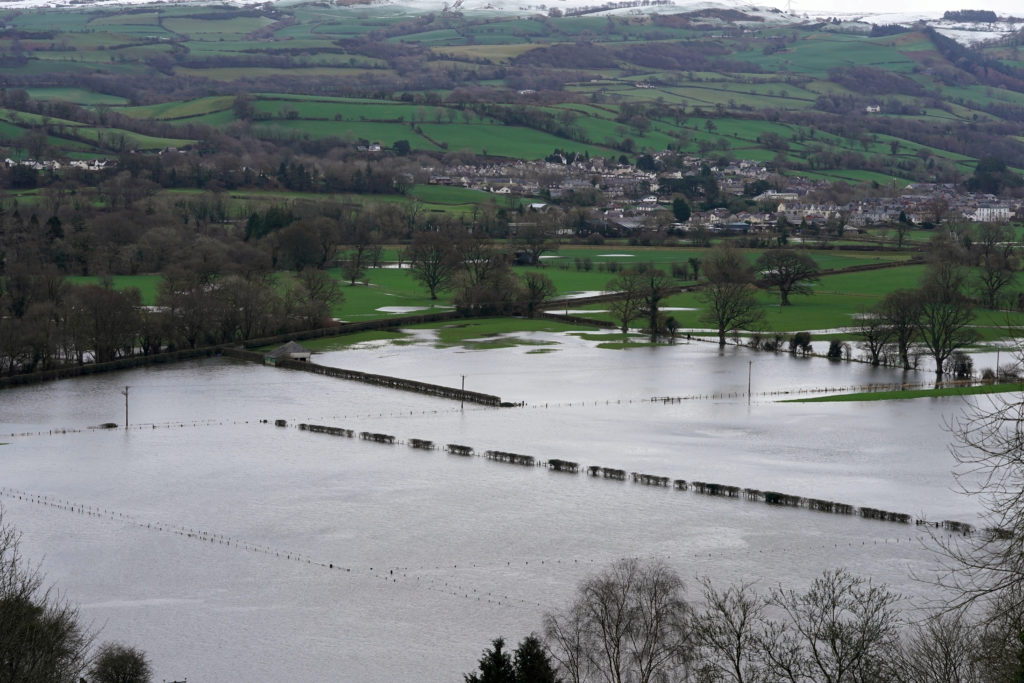 Flood waters are seen near Llanrwst in North Wales, after Storm Ciara lashed through Britain, February 10, 2020. Photo by Jon Super/Reuters.

The weather is expected to strike all areas of Britain, including parts of northern England still recovering from Storm Ciara last weekend. That storm left at least eight people dead across Europe, including two in the U.K.

Airlines preemptively canceled hundreds of flights out of London and other U.K. airports, and railways warned about possible train delays and cancellations. Tens of thousands of passengers were being affected on a busy travel day for British families, as most schools in the country closed down for a mid-winter break.

Easyjet cancelled around 230 flights in and out of the country as wind speeds are set to hit 70 mph (113 kph). British Airways also cancelled flights.

Areas in northern England, which are still recovering from Ciara, faced up to 4 1/2 inches (120 centimeters) of rain on Saturday. The country’s Environment Agency said flooding is likely to be worse than last weekend — when hundreds of homes were flooded as river burst their banks — since the rain will be falling on saturated ground.

“Our armed forces are always ready to support local authorities and communities whenever they need it,” Britain’s Defense Secretary Ben Wallace said. “The rapid response of the Army today will help with provision of flood relief to local communities in West Yorkshire.”