Zbigniew Brzezinski, the Polish immigrant who became President Jimmy Carter’s national security adviser, packed many accomplishments into an 89-year lifetime: strategic thinker; scholar; teacher; prolific writer, author and analyst-commentator; adviser to presidential candidates and officials. That busy life also included more than 80 appearances on the PBS NewsHour, going back to 1976 when the then half-hour program was known as the MacNeil/Lehrer Report.

This more-than-full life is now chronicled in “Zbigniew Brzezinski: America’s Grand Strategist,” a biography from French official and scholar Justin Vaisse (who also has been a NewsHour guest).

And while books will keep appearing about Brzezinski’s mostly friendly rival Henry Kissinger, this 505-page work (in small type that will be hard on the eyes of the age cohort most likely to read it) will probably stand for some time as the definitive portrayal of a sharp mind and sometimes sharp tongue that attracted critics and opponents, as well as admirers and such famous proteges and colleagues as Madeleine Albright and Robert Gates.

Brzezinski was a foremost example of a respected scholar who realized early on he wanted to play on a larger field.

Brzezinski’s time in high public office was relatively brief, four years compared with Kissinger’s eight. Vaisse offers a balanced but sympathetic rendering of the Carter-Brzezinski policies and actions, while acknowledging that period is often characterized more by vacillation and failure, especially the Iran hostage saga and bungled rescue attempt. On the plus side, Vaisse points out, are the Camp David accords between Israel and Egypt, the U.S. establishing full diplomatic relations with China and the politically costly Panama Canal treaty which drained anti-American venom from Latin America.

That record, too, will be fodder for authors for decades to come. What separates the Vaisse book from the pack is a detailed and perceptive study of the rise of an academic complex in the making of U.S. foreign policy (what he calls the Cold War University) and its role as the successor to the New York WASP establishment that began disintegrating with the Vietnam War.

Vaisse knows his subject well but also brings to it the perspective of an outsider not caught up in the factions of U.S. academic politics. As he details, the U.S. government after World War II poured hundreds of millions of dollars into international relations and area studies programs. Harvard and Columbia were the premier but hardly the only recipients. What emerged from all those programs were young academics moving into government agencies, then into Washington’s expanding think tanks and forming the basic cadre of a new foreign policy elite.

Brzezinski and Kissinger were both the symbols and advance guard of this new cadre. One a Polish Catholic (his father was a Polish diplomat stationed in Canada when the Nazis invaded Poland), the other a German Jewish refugee, they were joined over the years by all number of ethnicities that were fashioned into a new meritocracy replacing the Wall Street lawyers and bankers who had run the show into the 1960s. But even as late as Carter’s 1977 accession to the White House, the president had to send a memo to the staff on how to spell and pronounce the name of his national security adviser. 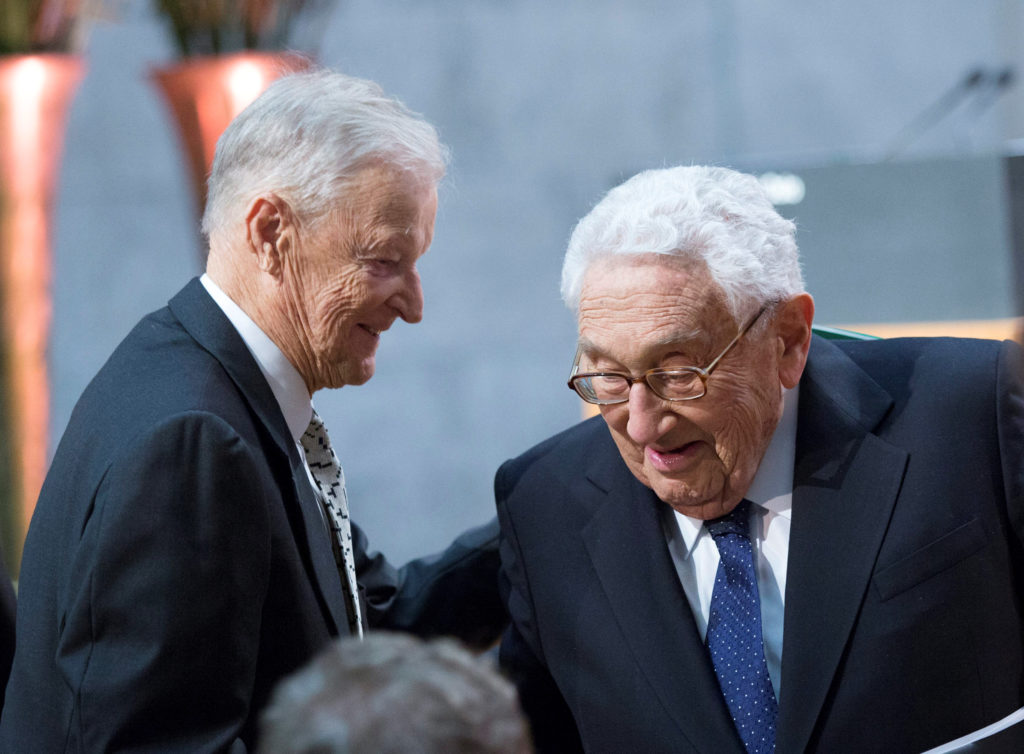 As Vaisse details through the biography, Brzezinski was a foremost example of a respected scholar who realized early on he wanted to play on a larger field, the man of action who could influence events. It turned out to be a blessing when Harvard denied him tenure, and he moved to Columbia, which was that much closer to Washington and then an epicenter of foreign policy networking, especially the Council on Foreign Relations.

He was the networker par excellence, serving on the State Department policy planning staff in the Johnson administration, a key adviser in Hubert Humphrey’s losing 1968 campaign, creator of the Trilateral Commission which brought him and then Georgia Governor Carter together.

If I have any qualms about this book, it is that the younger readers whom I see at Washington think-tank events will absorb all the networking lessons but skim by the prodigious, prolific hard work Brzezinski put in, a constant stream of articles and books. Vaisse’s research is equally prodigious with only a few minor mistakes, such as labeling Navy officer Carter a Marine, placing Sen. Jesse Helms in the wrong Carolina and he or his translator confusing names of congressional committees.

What separated Brzezinski from Kissinger was his fierce independence.

All that writing and speaking also set up Brzezinski as a focus of controversy. The older WASP establishment especially dismissed his harder line views on the Soviet Union (according to Vaisse they were much more nuanced than commonly caricatured). Brzezinski did not hesitate to fight back. When Averell Harriman, the epitome of the old establishment, questioned whether a Pole could deal with the Soviets, Brzezinski retorted with whether the son of one of America’s foremost capitalists was similarly incapable. The other policy line that brought vivid opposition was his consistent view that Israel needed to take more steps to make peace with the Palestinians and Arabs and get out of the West Bank settlements.

What separated Brzezinski from Kissinger was his fierce independence. While Kissinger worked hard to stay close to a range of Republicans from Nelson Rockefeller to Donald Trump and Jared Kushner, Brzezinski refused to support Democratic presidential nominees in 1972 and 1988, deploring what he saw as leftward drift in the party. And unlike Kissinger, Brzezinski spent little time courting the media, perhaps to his detriment in the White House years.

And nowhere did that independence and readiness to speak his mind come into view more than during the second Iraq War. He broke with the neo-cons with whom he had been close in the 1970s. As Vaisse points out, his opposition to the war (and during that time he was a regular commentator for the NewsHour) helped make him a new found hero to liberals who had previously blamed him for hardening the Cold War in the 1970s.

Vaisse’s concluding judgment is both about the man and the country he served:

“What remains when the name Brzezinski comes up is the image of an American foreign policy sage. America, which welcomed Brzezinski as a student in 1950, made him a citizen in 1958, and brought him all the way to the White House in 1976, continued to listen to his foreign policy advice until his death in 2017. In what other country would such a career have been possible. A grand master of strategy and geopolitics, Zbigniew Brzezinski helped guide America’s course through an extraordinary century, the age in which it became an empire.”