ALTAMIRA, Brazil (AP) — As fires raged in parts of the Amazon, Mydje Kayapo sat in a small boat looking out over the Curua River in the Bau indigenous reserve. The smell of smoke filled the air, and Kayapo was worried.

“The fire is coming closer and closer to our reserve,” he told a visiting news team from The Associated Press. “Now it is about 20 kilometers (12 miles) away.”

Kayapo, one of the Bau people’s leaders, helps organize a village watch group to protect the community’s lands from encroaching flames as well as illegal loggers, miners and others seeking to exploit the area. With fires spreading quickly to wide swaths of indigenous territories in recent weeks, his task has grown more critical.

So far in 2019, Brazil reported 83,000 fires, a 77% increase from the same period last year. Many of those were set in already deforested areas by people clearing land for cultivation or pasture.

With over 98% of Brazil’s indigenous lands within the Amazon, the threat to groups like Kayapo’s are particularly exposed. 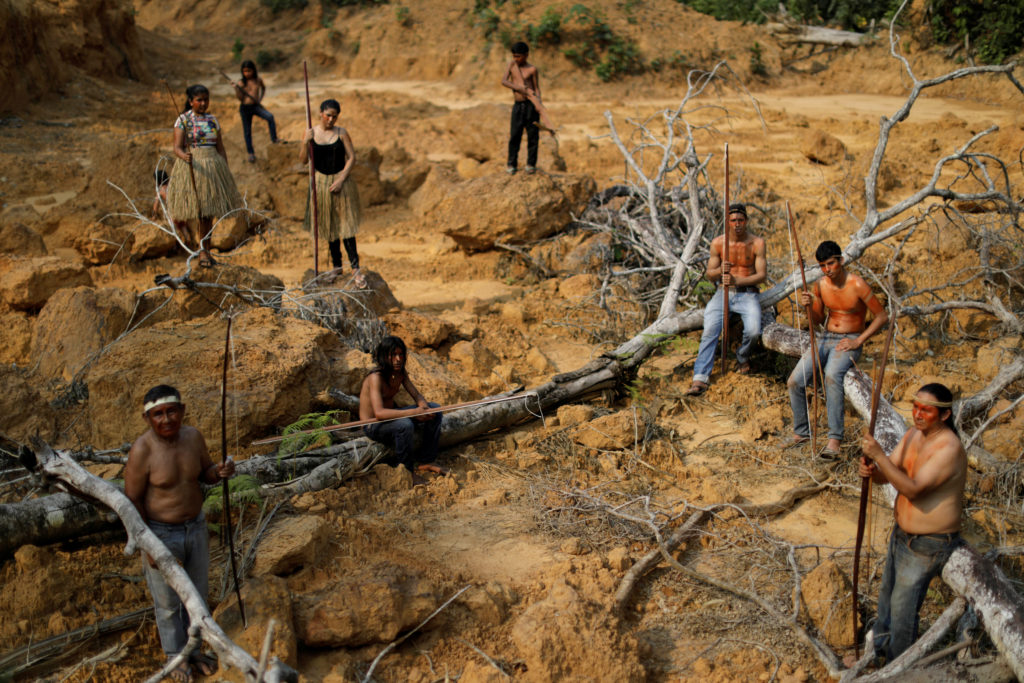 Indigenous people from the Mura tribe show a deforested area in unmarked indigenous lands inside the Amazon rainforest near Humaita, Amazonas State, Brazil on August 20, 2019. Photo by Ueslei Marcelino/Reuters

According to Brazil’s National Space Research Institute, an estimated 3,553 fires are now burning on 148 indigenous territories in the region.

“Just outside, our reserve is being heavily deforested. It’s being badly destroyed,” Kayapo said. “We indigenous people need to be united.”

As a multitude of international players discuss how to develop and protect the Amazon, Kayapo and others find themselves on the front line of firefighting efforts and an ever-acrimonious feud with Brazilian President Jair Bolsonaro.

Boslonaro has come under harsh criticism for environmental policies that some say are weakening safeguards in the rainforest. He maintains Europeans are trying to infringe on his country’s sovereignty, while also arguing that the demarcation of indigenous lands has hindered business interests.

On Tuesday, he reasserted his claims at a meeting of Amazon regional governors, arguing that reserves are being exploited by outsiders to halt the growth of Brazil’s economy.

“Many reserves are located strategically, someone arranged this,” Bolsonaro said, without noting who he was referring to. “Indians don’t have a (political) lobby, they don’t speak our language, but they have managed to get 14% of our national territory.”

As rhetoric escalates, indigenous leaders have some of the most at stake.

Saulo Katitaurlu, a leader in the municipality of Conquista D’Oeste in Mato Grosso state, appeared woeful as he walked along the banks of the Sarare River.

“The non-indigenous do whatever they want and then put the blame on the Indian,” Katitaurlu said, explaining that when his group reported a fire to authorities, a rancher said the tribe had set the blaze themselves.

This year, he said his indigenous group, the Nambikwara Sarare, felt the effects of farming and ranching expansion even more acutely and said inspectors were “not going after” the criminals.

“Some years ago there were a few (fires) but now there are more,” Katitaurlu said. “With the Amazon burning, this is the largest (fire) that has ever happened and the smoke is coming here. Today the sky is clean, but two days ago it was full of smoke and hot.”

In recent days, leaders of the Group of Seven industrial nations pledged to help protect the Amazon region with $20 million in funds, in addition to a separate $12 million from Britain and $11 million from Canada.

At the same time, French President Emmanuel Macron has engaged in an increasingly personal feud with his Brazilian counterpart, while Chilean President Sebastián Piñera said Latin America countries “have sovereignty over the Amazon.”

Leaders of all Amazon nations except Venezuela will meet Sept. 6 “to come up with our own unified strategy for preserving the environment, and also for exploration sustainable in our region,” Bolsonaro said Wednesday.

Although Brazil’s president and international players have dominated the discussion, some indigenous leaders appear to feel the most effective way to influence environmental preservation policies is to raise their own voices — or take matters into their own hands.

“I think this president doesn’t know the constitution very well,” said Kayapo, the leader from the Bau reserve. “We are resilient. If there is an invasion in our reserve, if they try to come here … we will react against the Bolsonaro government and say: ‘Not here. This reserve has an owner.'”

In an Aug. 24 video posted to YouTube, one indigenous woman wearing face paint and a headdress addressed the camera and also vowed to “resist for the sake of the forest, for our way of living.”

“We from the Xingu River are connected to you, all together standing in defense of the Amazon,” she said. “We are on the front line and we need your support, join our fight.”