The United Kingdom has voted to exit the European Union, becoming the first nation to leave the economic, political and cultural bloc. The news sent shockwaves through the global economy and led to the resignation of British prime minister David Cameron, who supported the Remain campaign.

“Over 33 million people from England, Scotland, Wales, Northern Ireland and Gibraltar have all had their say,” Cameron said in his resignation speech. We should be proud of the fact that, in these islands, we trust the people with these big decisions.” 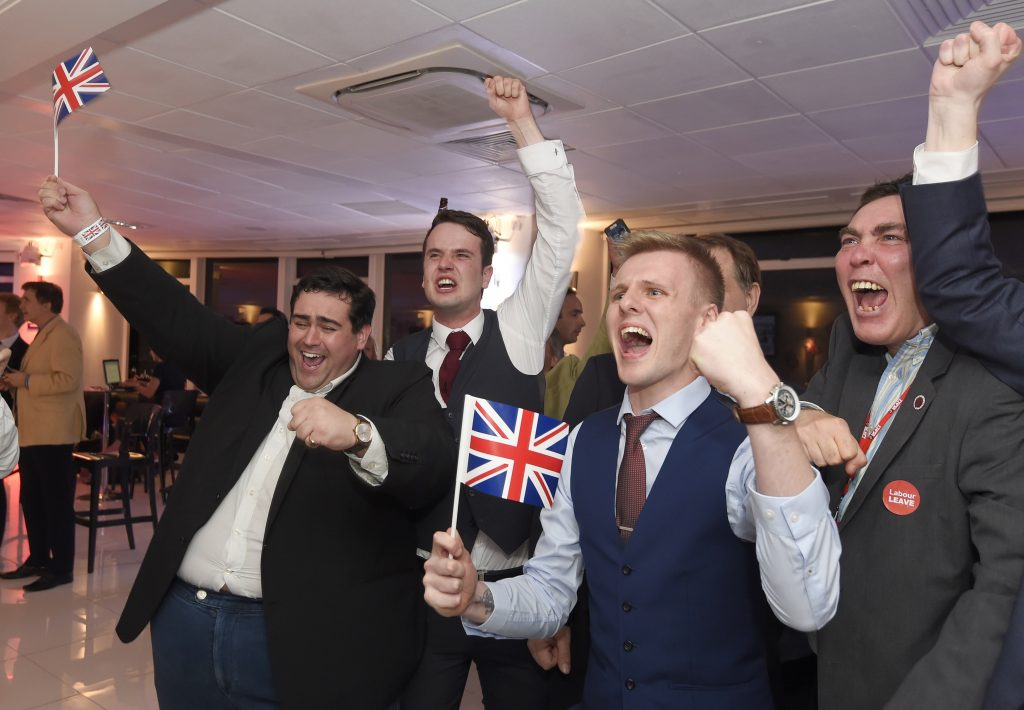 Leave supporters cheer results at a Leave.eu party after polling stations closed in the Referendum on the European Union in London, Britain, June 23, 2016. Photo by Toby Melville/REUTERS

Cameron continued by congratulating the Leave campaign for “the spirited and passionate case that they made.” The prime minister did not release a precise timetable for his departure, but guaranteed that he would remain in his post for at least three months with an aim to depart by October.

Exit polls show that England and Wales drove the decision to leave, while Northern Ireland and Scotland citizens leaned toward staying. Scotland prime minister Nicola Sturgeon believes a second independence referendum for her nation is “highly likely” following the Brexit. Scotland voted 62 versus 38 percent to stay in the EU, according to the BBC.

“It’s a statement of the obvious that the option of a second independence referendum must be on the table and it is on the table,” Sturgeon said.

Global markets immediately plummeted in reaction to the referendum results. The British pound nosedived to its lowest valuation in 30 years, as the nation’s stock market — FTSE — reported 8 percent losses within the first few seconds of trading Friday morning.

Economic analysts are predicting the biggest single-day decline since the 2008 financial crisis. Bank of England governor Mark Carney promised 250 billion pounds ($347 billion) to stabilize the economy. Other European markets took heavy hits, and the European Central bank pledged to provide liquidity for domestic and foreign currencies to prevent panic, as did the U.S. Federal Reserve for the dollar.

Losses are expected for U.S. stocks, with early estimates predicting a five percent drop for S&P 500 and Nasdaq futures. The Dow Jones reported a 500 point — 3 percent — drop within the first half hour of trading on Friday.

A handful of Europe’s top leaders called on Britain to depart the EU “as soon as possible” and said renegotiation would not be an option. Exiting the European Union will take at least two years, and the vote will likely have immediate legal consequences as EU laws will be unraveled from Britain’s own codes. Donald Tusk, president of the European Council, voiced his disappointment in the referendum results, but said EU law would continue to apply to the UK until the nation formally leaves.

“There’s no hiding the fact that we wanted a different outcome of yesterday’s referendum,” Tusk said. “Today, on behalf of the 27 leaders I can say that we are determined to keep our unity as 27.”

Donald Trump responded to the vote by reiterating his support for the Brexit. “I think it’s a great thing that’s happened,” Trump said, as he continued his current tour of Scotland.

A month before Thursday’s historic vote, the Hillary Clinton campaign urged the UK to remain in the EU. “Hillary Clinton believes that transatlantic cooperation is essential, and that cooperation is strongest when Europe is united,” her senior policy adviser Jake Sullivan told the Observer in late April.

Clinton, the presumed democratic presidential nominee, added this morning that she respects the choice made by the people of the United Kingdom.

“Our first task has to be to make sure that the economic uncertainty created by these events does not hurt working families here in America,” Clinton said in a statement. “We also have to make clear America’s steadfast commitment to the special relationship with Britain and the transatlantic alliance with Europe.”

PBS NewsHour Weekend explored the Brexit from the points of view of British voters:

This story will be updated.