Business lobby calls for U.S. to drop sanctions on Myanmar

WASHINGTON — The U.S. business lobby says it is high time to drop the remaining U.S. sanctions on Myanmar, but human rights activists and U.S. lawmakers say not so fast.

That poses a dilemma for President Barack Obama, who wants to encourage investment but not lose leverage to encourage further reforms. So next week, Obama is expected to renew sanctions for another year. The administration could take some state-run companies off a U.S. Treasury blacklist.

Secretary of State John Kerry will be traveling to Myanmar on May 22 to signal support for the civilian-led government that took power last month and for further democratic and economic reforms, the State Department said Friday.

The U.S. waived its longstanding bans on investment and trade in 2012 after the country also known as Burma began shifting from a half-century of repressive military rule. The U.S. still forbids business dealings with companies majority-owned by the military and dozens of companies and individuals designated by Treasury’s Office of Foreign Assets Control. The U.S. also bans arms trading and imports of rubies and jade, one of Myanmar’s most lucrative industries.

The authority under which sanctions are imposed is the International Emergency Economic Powers Act, which empowers the president to regulate commerce with another country in response to “an unusual and extraordinary threat” to the United States. Some 20 countries are subject to such a declared emergency.

“Does an emergency still exist as it did in Burma five or 10 years ago?” said John Goyer, senior director for Southeast Asia for the U.S. Chamber of Commerce, which is pushing lifting of Myanmar-specific sanctions that it says create uncertainty for investors. He said that where necessary, the U.S. could blacklist companies and individuals under different sanctions programs.

Although several major U.S. firms like Coca-Cola, General Electric, Chevron and Caterpillar are now operating in Myanmar, U.S. investment of $248 million represents less than 1 percent of total foreign investment there, a much lower proportion than in other Southeast Asian countries, Goyer said. 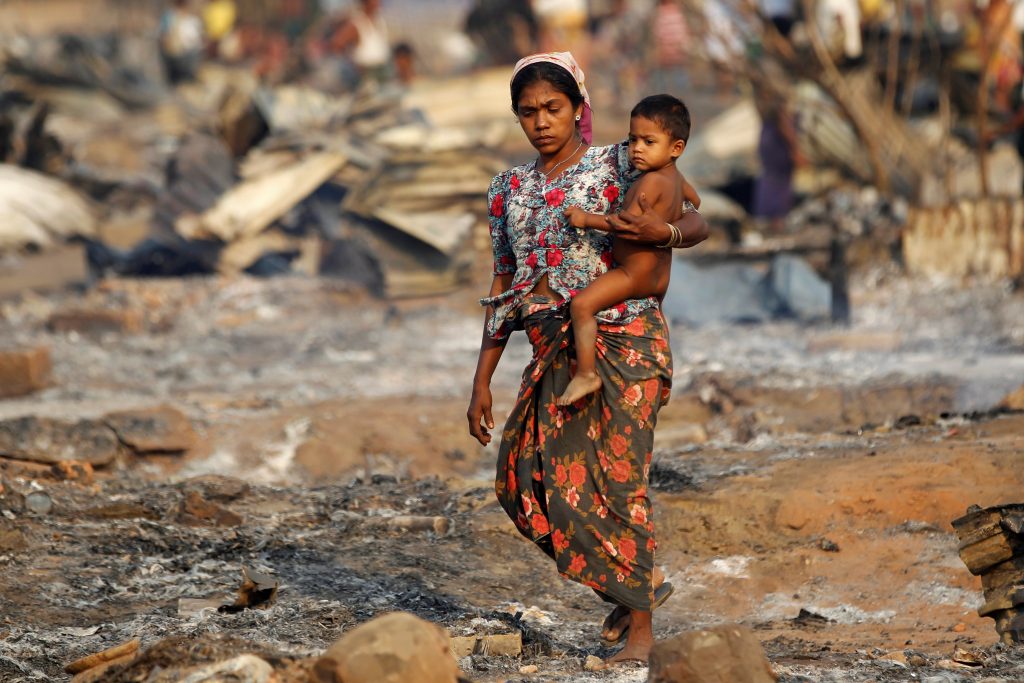 A woman carrying a baby walks among debris after fire destroyed shelters at a camp for internally displaced Rohingya Muslims in the western Rakhine State near Sittwe, Myanmar May 3, 2016. Photo By Soe Zeya Tun/Reuters

“The current sanctions regime is deliberately limited and creates incentives for human rights abusers to clean up their act,” said Matthew Smith, executive director of the group Fortify Rights. “These measures are sensible and should remain in place. Known human rights abusers shouldn’t profit from improved bilateral relations.”

U.S. lawmakers of both parties have also urged Obama to renew the sanctions authority that expires on May 20.

In a letter to the president this week, seven House members said that despite the electoral success of Suu Kyi’s party, “there is no path toward ending the military’s extraordinary and powerful role in civilian politics.” Under the current, junta-era constitution, the military controls three key government ministries and 25 percent of parliamentary seats.

Congressional aides briefed by the administration this week said they expect the sanctions authority to be renewed but for some non-military state-owned enterprises to be either removed from the Treasury blacklist, or get waivers. The aides spoke on condition of anonymity as they were not authorized to discuss the matter before the announcement. The aides said that the administration is also considering the duty-free trade benefits for Myanmar, but it’s unclear when that might happen.

“The U.S. can still put some particular sanction on Myanmar but the unnecessary ones, especially (ones) that affect the people, farmers and poor people, should be lifted,” he said.

Left: U.S. President Barack Obama and former political prisoner Aung San Suu Kyi, who is now running the Myanmar's government, hold a press conference after their meeting at her residence in Yangon, November 14, 2014. The president may extend sanctions on the country for another year even as business and human rights activists tussle over the probable decision. Photo By Kevin Lamarque/Reuters