BANGKOK — Anti-government protesters gathered in large numbers in Thailand’s capital on Sunday for a rally that suggested their movement’s strength may extend beyond the college campuses where it had blossomed.

Thousands of people assembled at Bangkok’s Democracy Monument, a traditional venue for political activities, where they heard speeches, watched skits and listened to music. Hundreds of police were also present, as well as a small contingent of royalists opposed to the protesters. There was no reliable estimate of the crowd size, though it appeared to be one of the biggest demonstrations in several years.

The rally ended after almost eight hours with about two dozen students who are facing arrest joining together on stage to repeat their demands and renew their commitment to the cause of democracy. They issued a call for the government to take action by next month or face another major protest rally.

The student-led movement had already declared three core demands: holding new elections, amending the constitution and ending the intimidation of critics of the government.

At the finale of Sunday’s rally, they spelled out three more points, which were also written on banners behind them: no coup d’etat, no national unity government and upholding Thailand as a democracy with the king as head of state under the constitution.

The reference to a national unity government was apparently a warning to all political parties against making a backroom deal instead of holding elections, and the reference to the king seemed to be meant as reassurance that they did not want to abolish the monarchy.

“It is clear that students from several generations are the driving force of change in Thai society,” said Narin Isariyasith, a 20-year-old student at Thammasat University.

“We have done this in the past, but Thailand still has no full democracy,” he said. “Dictatorship keeps coming back. And I think it is our duty to end this vicious cycle.”

As the army chief in 2014, current Prime Minister Prayuth Chan-ocha led a coup ousting an elected government. He then served as prime minister in the military regime that succeeded it, and returned as premier after a general election last year. Laws guiding the 2019 election were widely seen as so heavily rigged in Prayuth’s favor that victory was all but guaranteed.

Their action was virtually unprecedented, as the monarchy is considered sacrosanct in Thailand, and any criticism is normally kept private. A lese majeste law calls for a prison sentence of three to 15 years for anyone found guilty of defaming the royal institution.

The sensitivity of the issue was illustrated by the failure of most mainstream Thai media to report in any detail on the students’ manifesto about the monarchy. The issue was barely and only obliquely touched upon at Sunday’s rally.

Police have arrested several protest leaders and charged them with sedition for statements made at a small rally in July. They were released on bail and vowed to attend Sunday’s rally, in what appeared to be defiance of the terms of their release. 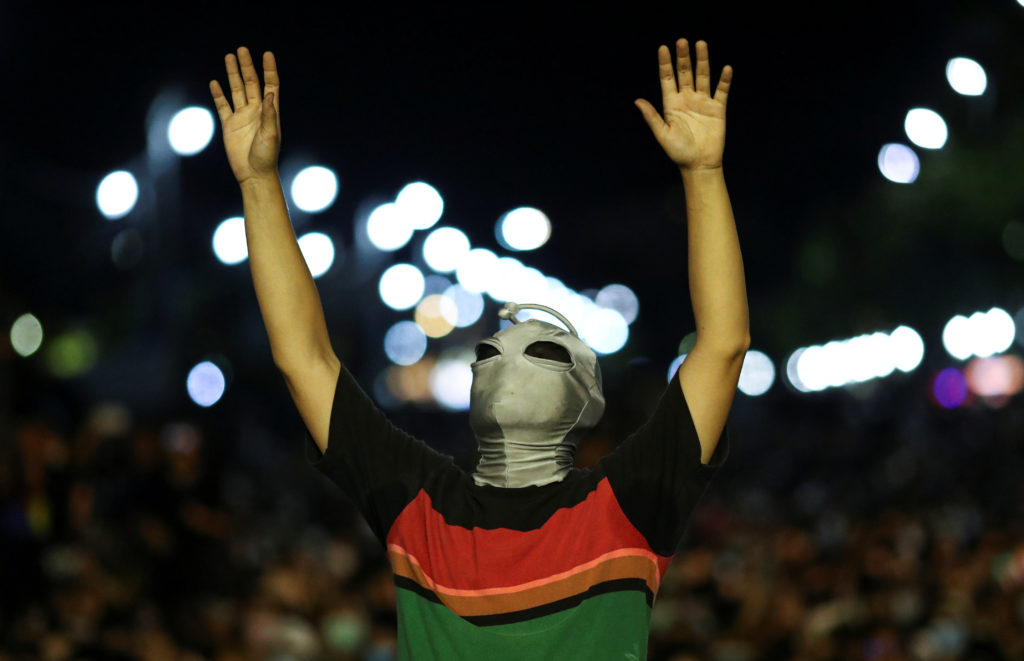 A pro-democracy protester with his face covered raises hands during a rally to demand the government to resign, to dissolve the parliament and to hold new elections under a revised constitution, near the Democracy Monument in Bangkok, Thailand, August 16, 2020. Photo by Athit Perawongmetha/ Reuters.

Many young people at Sunday’s protest were undeterred.

A 10th grade student from Satriwithaya School, an elite secondary school for girls, said it was not the first protest she had attended. The 14-year-old, who gave her name only as Pang, was with friends at a table selling books and other items to raise funds for the protest movement.

“I came to this protest today because I want to express my standpoint in opposing the dictatorship, asking for equal rights and having a better future,” she said.

It has been unclear how the escalation of the activists’ demands to include the monarchy has affected the popularity of the movement, since it could alienate some followers or make them fearful that the authorities will crack down heavily on them.

The government may also be faced with a dilemma, since it is committed to defending the royal institution but likely wary of acting with too heavy a hand that might tilt public support to the protesters.

Prime Minister Prayuth’s government has done well in coping with the health aspects of the coronavirus, but its management of the economy had been lackluster even before COVID-19 battered it.

Royalists have responded to the student movement by defending the monarchy in online statements and petitions, and in person with a small presence adjacent to Sunday’s rally. They declared earlier that they were there to observe and bear witness to any insults to the monarchy.

Left: A pro-democracy protester raising his hands reacts during a rally to demand the government to resign, to dissolve the parliament and to hold new elections under a revised constitution, near the Democracy Monument in Bangkok, Thailand, August 16, 2020. Photo by Athit Perawongmetha/ Reuters.