North Korea has threatened to test-fire four unarmed intermediate-range ballistic missiles (IRBM) that would fly over Japan and land in the waters around Guam, a U.S. territory that hosts multiple military facilities. Pyongyang has never conducted such a test, and it would be among the most provocative actions ever taken by the regime against the United States and Japan.

On Aug. 28, North Korea, for the first time, fired a ballistic missile designed to carry nuclear payloads over Japan that landed in the northern Pacific Ocean. While the United States and Japan did not do so during this launch, they may seek to intercept future launches of this kind with a range of defense systems — especially if the missile appears to be on a trajectory for Guam. There are risks associated with both attempting and not attempting to destroy the missiles.

What is ballistic missile defense?

Since the advent of ballistic missile technology in the 1940s, numerous states have pursued missile defense solutions that seek to destroy incoming missiles in flight before they can reach their target. In addition to interceptors — the defensive missiles that travel to inbound missiles to destroy them — missile defense systems operate in tandem with a network of various ground-, sea-, air-, and space-based sensor systems and radars. During the Cold War, the United States deployed missile interceptors with explosive payloads and even nuclear payloads [PDF]. Today, most U.S. interceptors attempt to destroy inbound missiles with direct impact. As a result, missile defense is often likened to “hitting a bullet with a bullet.”

What systems are available to attempt interception?

The United States Navy and Japan’s Maritime Self-Defense Force maintain a constellation of interceptors aboard Aegis Combat System-equipped guided missile cruisers and destroyers in the Sea of Japan. Additionally, the U.S. Navy is thought to operate such vessels in the Pacific and could position them near Guam in anticipation of a North Korean test. These vessels are armed with SM-3 Block I missiles that can attempt interception of an IRBM. Finally, the U.S. territory of Guam hosts a Terminal High-Altitude Area Defense (THAAD) system that could also attempt interception. 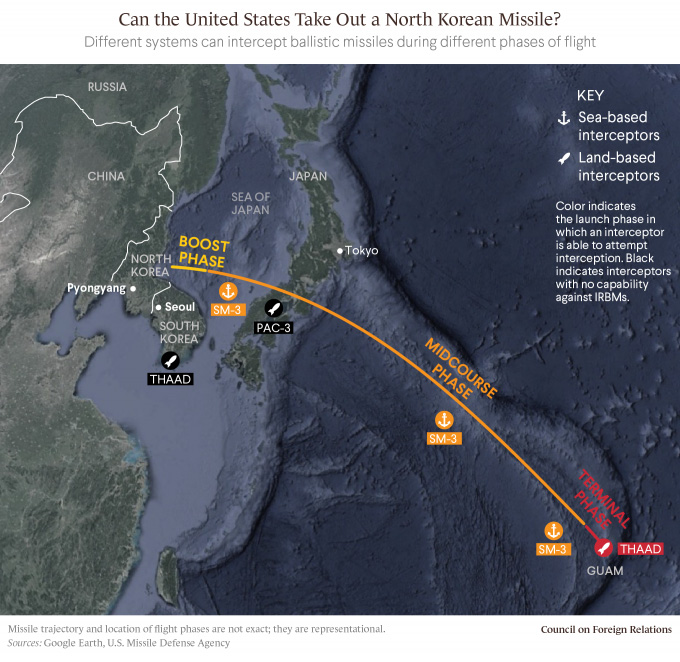 When is interception feasible?

Both the SM-3 and THAAD interceptors have proven capabilities against IRBM-class targets and would be able to engage a hypothetical North Korean launch toward Guam, but the Japan-based PAC-3 systems would not be able to intercept North Korean IRBMs flying over Japan. In the event a missile fails over Japanese airspace, however, PAC-3 interceptors may be able to destroy falling debris. According to the trajectory laid out in the North Korean threat, the missiles would fly for approximately fourteen minutes from their launch to their splashdown near Guam.

Midcourse. When a missile’s engines have burned out and its acceleration ends outside the earth’s atmosphere, it enters the phase of flight known as midcourse. SM-3 interceptors launched from U.S. and Japanese ships could defeat IRBMs through most of this phase, but a Hwasong-12 launched from North Korea toward Guam may enter midcourse late enough that the interceptors are unable to engage prior to the missile’s flight over Japan — an important objective for Tokyo and the U.S.-Japan alliance. No other active missile defense system in Northeast Asia, including the South Korea-based THAAD system, is capable of midcourse interception of an IRBM over the Sea of Japan.

Terminal phase. Finally, a missile enters what is known as its terminal phase, when it hurtles toward its target at immense speeds, pulled by gravity alone. Only THAAD interceptors at Guam’s Andersen Air Force Base can attempt interception at this point, though ship-based SM-3s could be effective at interception in late-midcourse flight, when the missile is still outside the atmosphere. Japan’s PAC-3 systems are capable of terminal interception of slower and shorter-range missiles, but not IRBMs.

What are the risks associated with interception?

There are considerable risks in both attempting and not attempting to destroy North Korean missiles launched toward Guam. SM-3 and THAAD interceptors have shown success against IRBMs in test environments, in which certain variables are controlled, but they cannot assure defense against multiple North Korean Hwasong-12 missiles in a real attack scenario. The systems have never been tested against multiple missiles simultaneously. Therefore, an attempt to intercept North Korean missiles could fail and, as a result, erode the credibility of U.S. missile defense, even if only one North Korean projectile successfully splashes down near Guam.

Not attempting interception, especially in the Sea of Japan before the missiles can overfly Japan, could undermine broader credibility in U.S. treaty assurances to Tokyo. Moreover, North Korea may interpret inaction as a carte blanche to attempt additional ballistic missile tests into the Pacific Ocean.

In the event that the United States and Japan successfully intercept all North Korean missiles, Pyongyang may be encouraged to pursue military escalation elsewhere. This could include additional ballistic missile launches or conventional mobilization on the Korean Peninsula.

This backgrounder was updated on Aug. 29 on the Council on Foreign Relations’ website.