HUMBOLDT, Saskatchewan — Saskatchewan’s Ministry of Justice said Monday one of the deceased in the crash that killed 15 people en route to a hockey playoff game was misidentified.

The ministry said the body of Parker Tobin was mistaken for that of Xavier Labelle.

It said Labelle is injured but alive, and Tobin is among the deceased.

The Office of the Chief Coroner has apologized for the misidentification. The ministry did not say how the error occurred.

“This was an identification error and Xavier is not deceased,” the statement said.

“Our condolences go out to the family of Parker Tobin. Unfortunately, Parker is one of the 15 that have lost their lives in this terrible tragedy. Parker had been misidentified and was previously believed to have survived.”

The news comes after this shattered town mourned its revered local youth hockey team, trying to come to grips with a devastating highway accident Friday that also injured the other 14 people on their bus.

People filed into the team’s home arena Sunday night for a vigil, filing up entry steps piled with flowers, jerseys and personal mementos in a makeshift memorial. 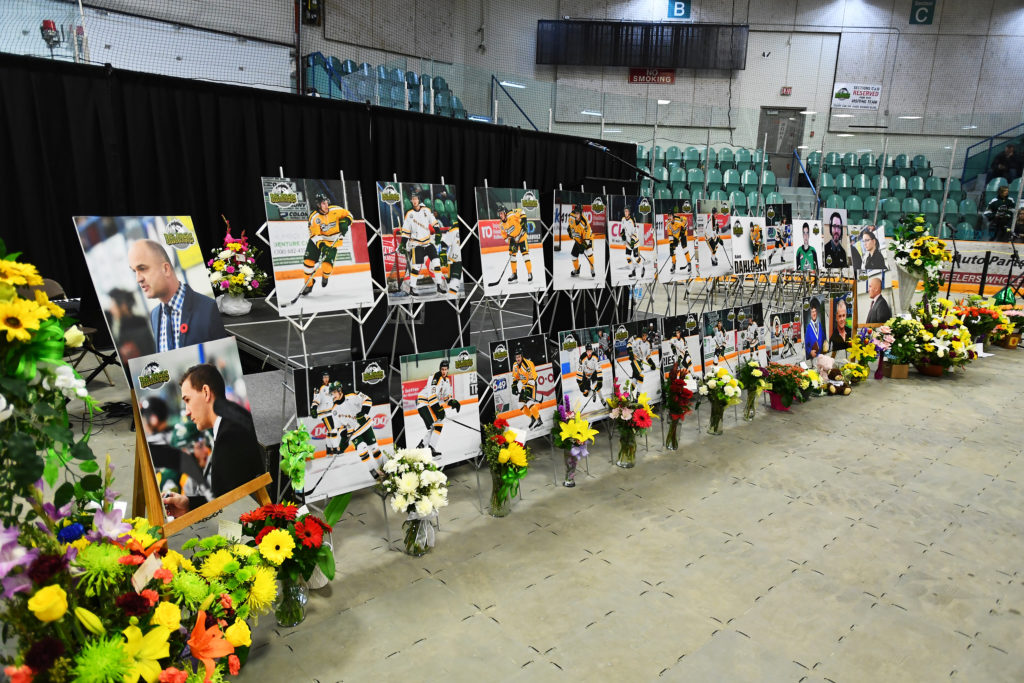 Photos of people involved in a fatal bus crash are seen before a vigil at the Elgar Petersen Arena, home of the Humboldt Broncos, in Humboldt, Saskatchewan, on April 8, 2018. Photo by Jonathan Hayward/Pool via Reuters

At the vigil, Sean Brandow, the local pastor and team chaplain, described how he happened upon the horrific accident scene Friday night and heard sounds of people he knew dying after a semi-trailer slammed into the bus taking the team to a playoff game.

The small town’s disaster was a blow, too, for Canada and its national sport. Among the dead were Broncos head coach Darcy Haugan, team captain Logan Schatz and radio announcer Tyler Bieber.

Brandow said he was on his way to the Broncos game and arrived at the scene right after the collision. He described hearing the cries and holding the hand of a lifeless body.

“To sit and hold the hand of a lifeless body,” he said. “All I saw was darkness and hurt and anguish and fear and confusion. And I had nothing. Nothing. I’m a pastor, I’m supposed to have something.”

The Royal Canadian Mounted Police said the driver of the truck that hit the bus was initially detained but later released and provided with mental health assistance. Police have given no cause for the wreck, saying a lot of issues remained to be investigated, including weather conditions at the time and any mechanical issues with the vehicles.

Team President Kevin Garinger choked back tears as he read out the names of the 15 dead to those at the vigil. People embraced each other, crying. Boxes of Kleenex were passed down rows. 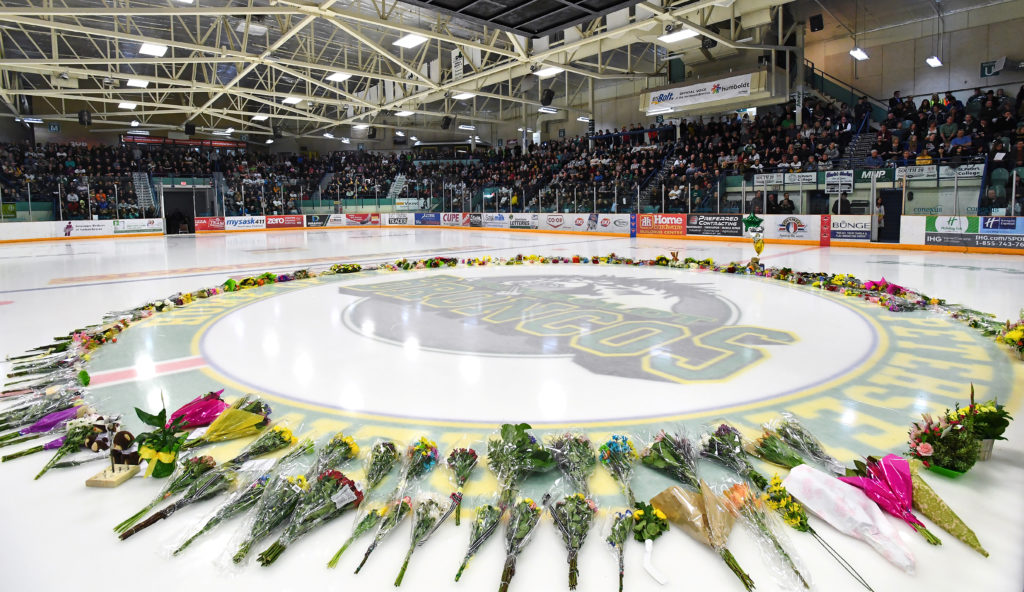 Flowers lie at center ice as people gather for a vigil at the Elgar Petersen Arena, home of the Humboldt Broncos, to honor the victims of a fatal bus accident in Humboldt, Saskatchewan, Canada. Photo by Jonathan Hayward/Pool via Reuters

Flowers ringed the team logo at center ice. Pictures of the dead and injured stood in front of the audience.

Nick Shumlanski, an injured player who was released from the hospital, attended the vigil wearing his white, green and yellow team jersey, with a bruise under his left eye.

Canadian Prime Minister Justin Trudeau visited the injured at the hospital Sunday and then attended the vigil. He sat among the crowd with his 11-year-old son, Xavier, who is a hockey player.

On the arena’s front steps, one tribute included a Kraft macaroni and cheese dinner box, which was a favorite meal of Evan Thomas, a forward who died in the crash. A bouquet of pink roses adorned the box, which read: “to Evan, game day special, love your billet brother and sister Colten and Shelby.”

Most of the players were from elsewhere in western Canada and they lived with families in Humboldt, a town of about 6,000 people. Families who provide homes for players are a large part of junior hockey in Canada, with players spending years with host families.

Dennis Locke, his wife and three young children came to the arena to hang posters of forward Jaxon Joseph, who was the son of former NHL player Chris Joseph. The Locke family hosted Joseph and treated him like a son.

“Best person ever,” Locke said. “Down to earth, loved playing with the kids.”

His wife wiped away tears from swollen eyes.

The Broncos were a close-knit team who dyed their hair blond for the playoffs. Garinger, the team president, said the team won’t disband. The home page of the team’s website was replaced with a silhouette of a man praying beneath the Broncos’ logo of a mustang.

“We’re devastated,” said Randolph MacLean, the hockey club’s vice president. “At the center of this, we have 15 souls who’ll never go home again. We have 29 lives that will never be the same.”

He said that as is the case with small town hockey across Canada, Humboldt’s arena is not just a recreation facility, but a focus of community life with the hockey team at its center.

“It’s an energy that spreads through the town,” he said.

Here’s what made the U.S.-Canada women’s Olympic hockey match so riveting