Cause of Indonesia tsunami pondered amid search for missing

TANJUNG LESUNG, Indonesia — Indonesian President Joko Widodo on Monday toured areas devastated by his country’s latest tsunami, as efforts to collect the hundreds of dead and save the injured were stepped up and scientists collected evidence on how a volcanic eruption triggered the tragedy.

Casualty figures from Saturday night’s disaster continued to rise, with at least 281 people confirmed killed and more than 1,000 injured. They were certain to rise further, with scores still missing from the affected areas along the coastlines of western Java and southern Sumatra islands, where hundreds of military personnel and volunteers were conducting their grim search along debris-strewn beaches.

On Saturday night, however, the ground did not shake to alert people before the waves ripped buildings from their foundations and swept terrified concertgoers celebrating on a resort beach into the sea.

Where victims were found, yellow, orange and black body bags were laid out, and weeping relatives identified the dead.

The waves that swept terrified locals and tourists into the sea along the Sunda Strait followed an eruption and apparent landslide on Anak Krakatau, or “Child of Krakatoa,” one of the world’s most infamous volcanic islands.

Hotels and hundreds of homes were heavily damaged by the waves. Broken chunks of concrete and splintered sticks of wood littered hard-hit coastal areas, turning popular beach areas into near ghost towns. Debris from thatch-bamboo shacks was strewn along the coast.

The Indonesian Medical Association of the worst-affected Banten region said that it sent doctors, medical supplies and equipment, and that many of the injured were in need of orthopedic and neurological surgery. It said most victims are domestic tourists who were visiting beaches during the long weekend ahead of Christmas.

It was the second deadly tsunami to hit seismically active Indonesia this year. A powerful earthquake triggered a tsunami that hit Sulawesi island in September, giving residents a brief warning before the waves struck.

On Saturday night, however, the ground did not shake to alert people before the waves ripped buildings from their foundations and swept terrified concertgoers celebrating on a resort beach into the sea. 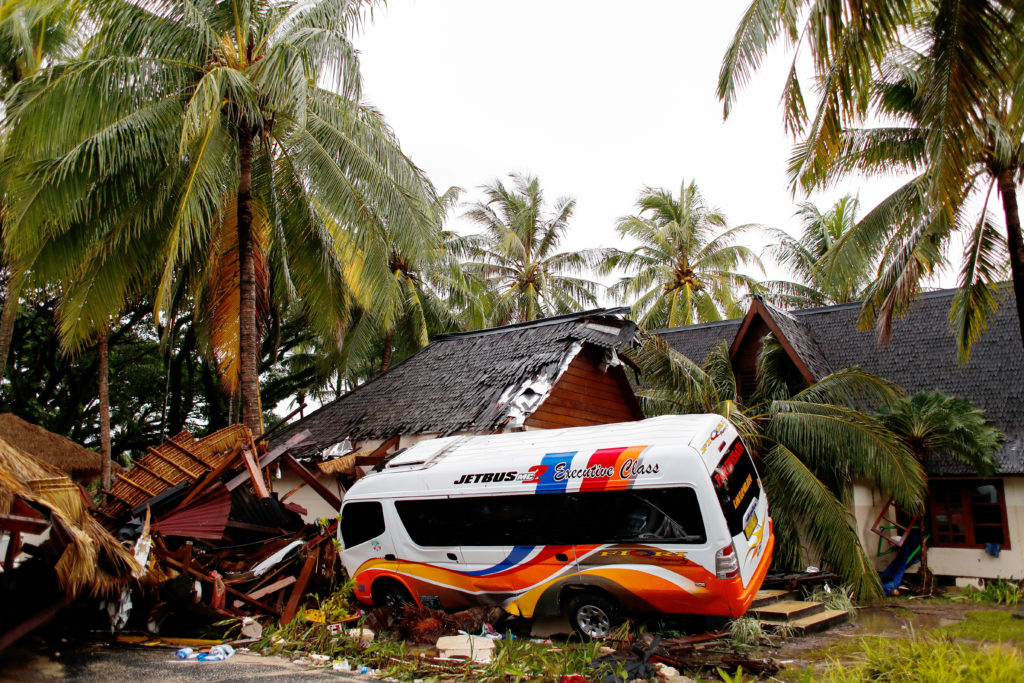 A destroyed car is seen after a tsunami hit an area in Tangung Lesung, Banten province, Indonesia, Indonesia, December 24, 2018. Photo by REUTERS/Jorge Silva

“I heard people shouting to run away and I saw the water had gone up to the mainland and the hotel had been flooded by water,” said witness Feri Ardian. “About 200 people were dragged away by the waves.”

Dramatic video posted on social media showed the Indonesian pop band Seventeen performing in a tent on Tanjung Lesung beach at a concert for employees of the state electricity company. A wave smashed through the makeshift stage, tossing the band and its equipment into the audience.

The group released a statement saying their bass player, guitarist and road manager were killed, while two other band members and the wife of one of the performers were missing. On Monday, five more bodies were recovered around the hotel, including a little boy.

President Widodo, who faces what promises to be a tough re-election campaign next year, responded Monday to the lack of any warning of the disaster with a vow to have all equipment used for detection of tsunamis replaced or repaired. Sutopo Purwo Nugroho, spokesman for Indonesia Disaster Mitigation Agency, acknowledged on Twitter that the country’s network of detection buoys had been dysfunctional since 2012, due to vandalism and budget shortfalls.

But the head of Indonesia’s Meteorology, Climatology and Geophysics Agency, Dwikorita Karnawati, said Monday that the tsunami was caused by Krakatau’s volcanic activity, so could not have been picked up by her agency’s sensors, which monitor the conventional tectonic earthquakes that are responsible for more than 90 percent of the tsunamis occurring in the country.

With Krakatau still erupting, she warned people to avoid activities around coastal areas in coming days due to high waves its activities and other factors. 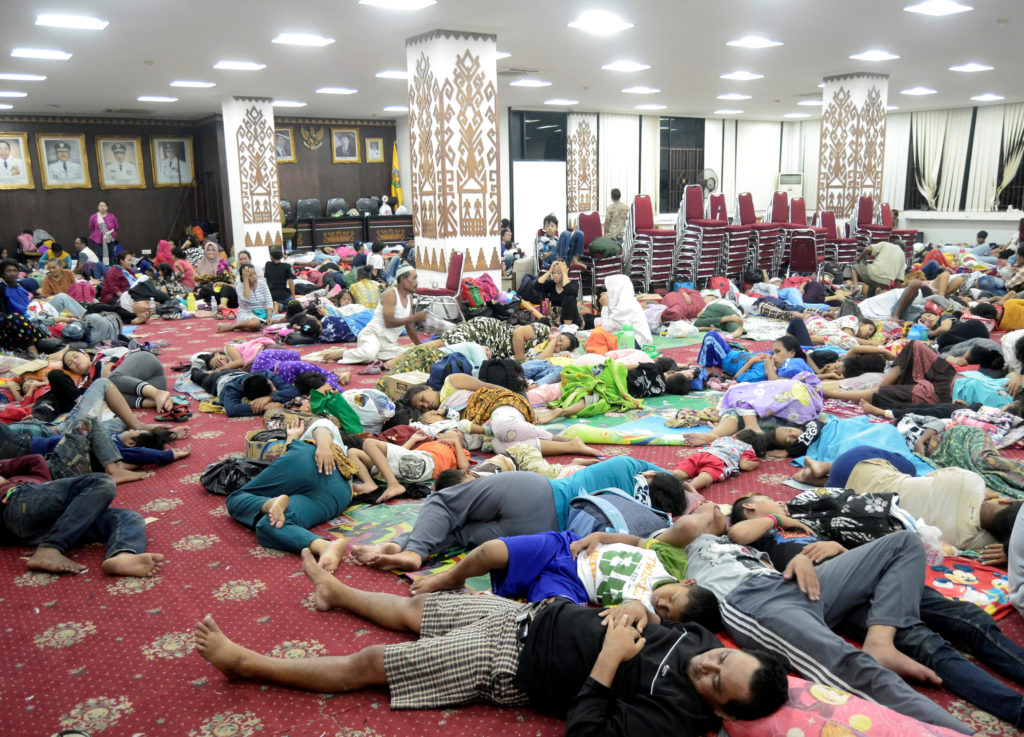 Residents, who lived at coast of Bandar Lampung, rest at government building after they evacuated following a tsunami hit Sunda strait in Lampung, Indonesia, in this December 24, 2018 photo taken by Antara Foto. Antara Foto/Ardiansyah/ via REUTERS ATTENTION EDITORS – THIS IMAGE WAS PROVIDED BY A THIRD PARTY. MANDATORY CREDIT. INDONESIA OUT.

The president — popularly known by the nickname Jokowi — told journalists after arriving by helicopter in the disaster region that he has ordered the Social Ministry to give compensation to the families of the dead as quickly as possible. He praised the army and police, along with local government officials, for their work in evacuating shorefront areas, which are still considered a danger zone.

Gegar Prasetya, co-founder of the Tsunami Research Center Indonesia, said Saturday’s tsunami was likely caused by a flank collapse — when a big section of a volcano’s slope gives way.

Scientists, including those from Indonesia’s Meteorology and Geophysics agency, said the tsunami could have been caused by landslides — either above ground or under water — on the steep slope of the erupting volcano. The scientists also cited tidal waves caused by the full moon.

Gegar Prasetya, co-founder of the Tsunami Research Center Indonesia, said Saturday’s tsunami was likely caused by a flank collapse — when a big section of a volcano’s slope gives way. It’s possible for an eruption to trigger a landslide above ground or beneath the ocean, both capable of producing waves, he said.

The 305-meter (1,000-foot) -high Anak Krakatau lies on an island in the Sunda Strait between Java and Sumatra islands, linking the Indian Ocean and the Java Sea. It has been erupting since June and did so again about 24 minutes before the tsunami, the geophysics agency said.

The volcanic island formed over years after the 1883 eruption of the Krakatoa volcano, one of the largest, most devastating in recorded history. That disaster killed more than 30,000 people, launched far-reaching tsunamis and created so much ash that day was turned to night in the area and a global temperature drop was recorded.

Most of the island sank into a volcanic crater under the sea, and the area remained calm until the 1920s, when Anak Krakatau began to rise from the site. It continues to grow each year and erupts periodically.

Indonesia, a vast archipelago of more than 17,000 islands and home to 260 million people, lies along the “Ring of Fire,” an arc of volcanoes and fault lines in the Pacific Basin. Roads and infrastructure are poor in many areas, making access difficult in the best of conditions.

A powerful quake on the island of Lombok killed 505 people in August. The tsunami and earthquake that hit Sulawesi in September killed more than 2,100, while thousands more are believed to still be buried in neighborhoods swallowed by a quake phenomenon known as liquefaction.

Saturday’s tsunami also rekindled memories of the massive magnitude 9.1 earthquake that hit Indonesia on Dec. 26, 2004. It spawned a giant tsunami off Sumatra island, killing more than 230,000 people in a dozen countries — the majority in Indonesia.

Left: An aerial view of an affected area after a tsunami hit the coast of Pandeglang, Banten province, Indonesia, December 24, 2018 in this photo taken by Antara Foto. Photo by Antara Foto/HO-Susi Air/via REUTERS.