China welcomes preliminary deal in trade war it blames on US

BEIJING — China expressed cautious optimism Saturday about a first-step trade agreement that dials down a trade war it blames the U.S. for starting.

Chinese experts and news media joined government officials in saying the deal would reduce uncertainty for companies, at least in the short term. They remained cautious, saying both sides will have to show a willingness to compromise to resolve the more fundamental differences between them.

“It at least stabilizes the situation and lays a foundation for the next round of trade talks or canceling additional tariffs in the future,” said Tu Xinquan, a professor at the University of International Business and Economics in Beijing. “I cannot predict what achievement can be made during the future talks.”

The two countries announced a “Phase 1” agreement Friday under which the U.S. will reduce tariffs and China will buy more U.S. farm products. Chinese officials said the nine-chapter text, which includes intellectual property, technology transfer, financial services and dispute settlement, has to undergo legal and translation review before it can be signed. 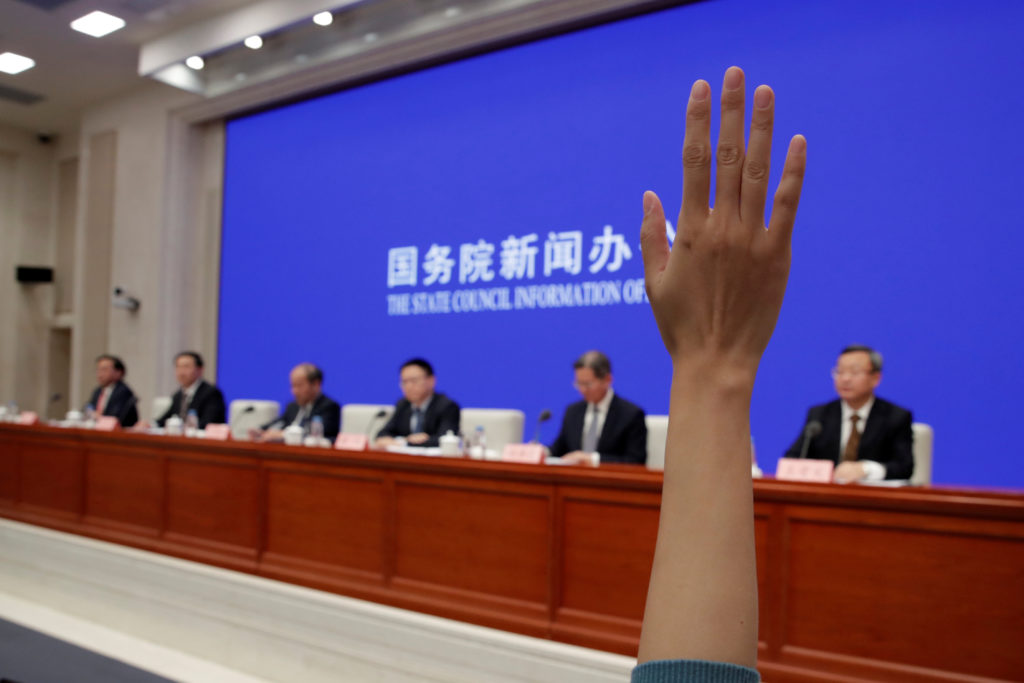 A journalist raises a hand for questions during a news conference on the state of trade negotiations between China and U.S. in Beijing, China December 13, 2019. Photo by Jason Lee/ Reuters.

At a late night news conference in Beijing, timed to coincide with the U.S. morning, the officials said the United States would begin phasing out tariffs on Chinese imports, rather than continue to raise them. The deal was announced just two days before higher tariffs were set to kick in. China would make similar tariff cuts, the officials said, but they gave no details.

China portrayed the agreement as in line with the opening up of its economy and the deepening of its economic reforms. Increased imports of high-quality products from the United States and elsewhere will “meet the growing needs of the people for a better life,” said Wang Shouwen, a deputy commerce minister and trade negotiator.

Bai Ming, an economic expert described as being close to the commerce ministry, told the state-owned Global Times newspaper that the U.S. tariff cuts demonstrate a positive attitude.

“They are not showing enough of it, but it’s an improvement,” he was quoted as saying. 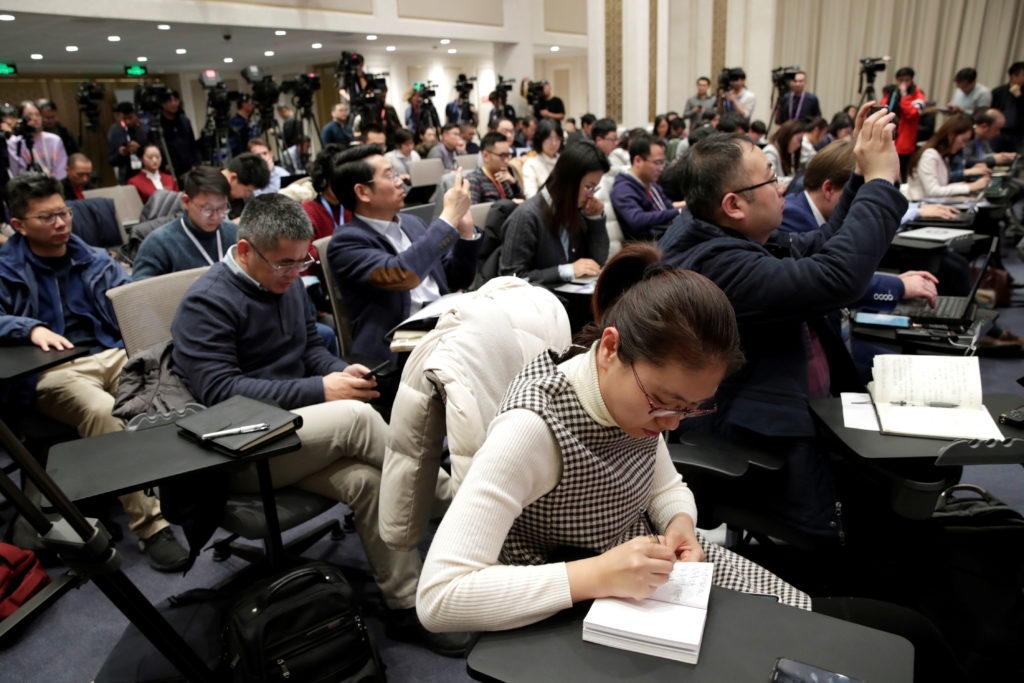 Journalists attend a news conference on the state of trade negotiations between China and U.S. in Beijing, China December 13, 2019. Photo by Jason Lee/ Reuters.

In a separate piece, the Global Times called the agreement a new beginning. It pointed to stock market gains in recent days as word of a possible deal emerged. The dispute between the world’s two largest economies had rattled markets and depressed global growth.

“China and the U.S. have been locked in a trade war for about 20 months and neither side could overwhelm the other to recklessly impose its own will on the other,” said the newspaper, which is known for its nationalistic views.

It added, though, that both countries are capable of prolonging the trade war, and that resolving their differences will require patient negotiations.

“Rome was not built in a day,” it wrote.