JERUSALEM — Christians in the Holy Land are marking Good Friday this year amid signs the coronavirus crisis is winding down, with religious sites open to limited numbers of faithful but none of the mass pilgrimages usually seen in the Holy Week leading up to Easter.

The virus is still raging in the Philippines, France, Brazil and other predominantly Christian countries, where worshippers are marking a second annual Holy Week under various movement restrictions amid outbreaks fanned by more contagious strains.

Last year, Jerusalem was under a strict lockdown, with sacred rites observed by small groups of priests, often behind closed doors. It was a stark departure from past years, when tens of thousands of pilgrims would descend on the city’s holy sites.

This year, Franciscan friars in brown robes led hundreds of worshippers down the Via Dolorosa, retracing what tradition holds were Jesus’ final steps, while reciting prayers through loudspeakers at the Stations of the Cross. Another group carried a large wooden cross along the route through the Old City, singing hymns and pausing to offer prayers.

“We have to pray for those who can’t be here,” said Alejandro Gonzalez, a Mexican living in Israel. “Those of us who can be here have a responsibility to keep them in mind and to go in this Way of the Cross that they are going through as well.” 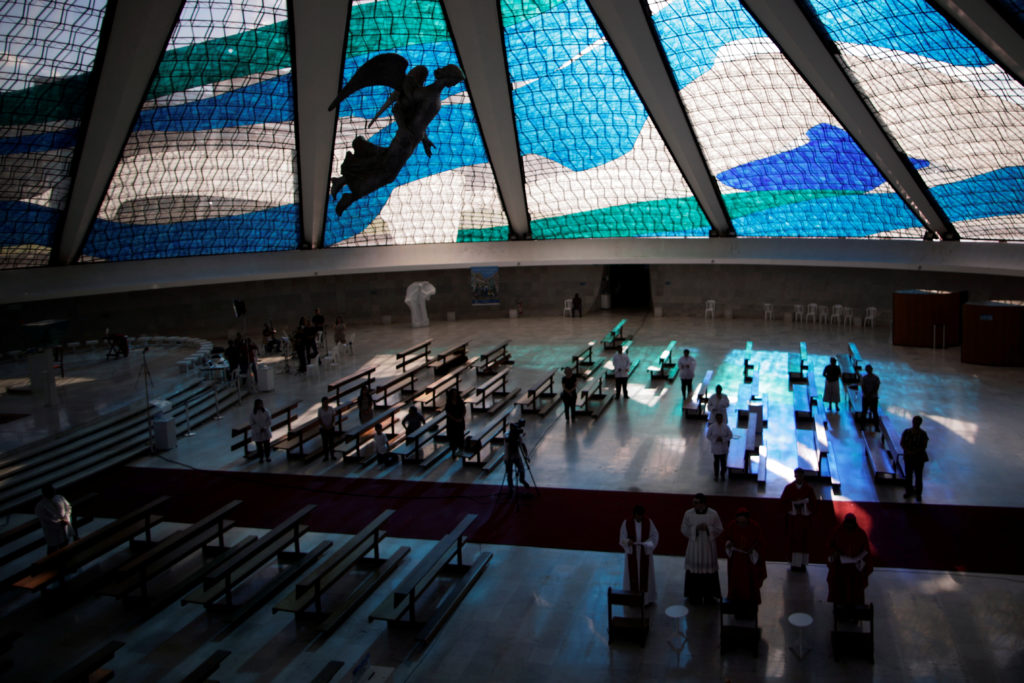 Cardinal Sergio da Rocha celebrates the Good Friday at Brasilia Cathedral, live streamed via web, in an Easter celebration without devotees while the spread of the coronavirus disease (COVID-19) continues in Brasilia, Brazil April 10, 2020. REUTERS/Ueslei Marcelino

The Church of the Holy Sepulchre, built on the site where Christians believe Jesus was crucified, died and rose from the dead, is open to visitors with masks and social distancing.

“Things are open, but cautiously and gradually,” said Wadie Abunassar, an adviser to church leaders in the Holy Land. “In regular years we urge people to come out. Last year we told people to stay at home… This year we are somehow silent.”

Israel has launched one of the world’s most successful vaccination campaigns, allowing it to reopen restaurants, hotels and religious sites. But air travel is still limited by quarantine and other restrictions, keeping away the foreign pilgrims who usually throng Jerusalem during Holy Week.

The main holy sites are in the Old City in east Jerusalem, which Israel captured along with the West Bank in the 1967 war. Israel annexed east Jerusalem and considers the entire city its unified capital, while the Palestinians want both territories for their future state. 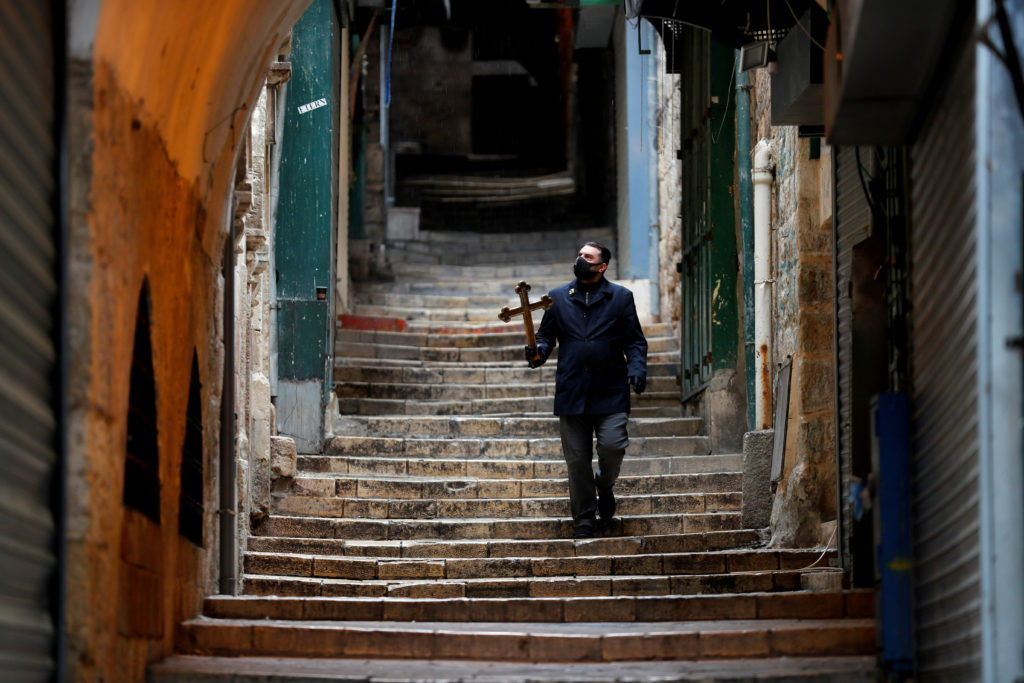 A man carries a cross as he walks the Via Dolorosa on Good Friday amid the coronavirus disease (COVID-19) outbreak, in Jerusalem’s Old City, on April 10, 2020. Photo by Ammar Awad/Reuters

Israel included Palestinian residents of Jerusalem in its vaccination campaign, but has only provided a small number of vaccines to those in the occupied West Bank, where the Palestinian Authority has imported tens of thousands of doses for a population of more than 2.5 million.

In neighboring Lebanon, Christians observed Good Friday under a coronavirus lockdown and amid a severe economic crisis exacerbated by the massive explosion that demolished parts of the capital last year. Even traditional Easter sweets are a luxury few can afford.

“People are not even talking about the feast,” says Majida Al Asaily, owner of a sweets shop in Beirut. “We haven’t witnessed anything like this year, despite the war and other difficulties that we had faced before.”

Pope Francis began Good Friday with a visit to the Vatican’s COVID-19 vaccination center, where volunteers have spent the past week administering some 1,200 doses of the Pfizer-BioNTech vaccine to poor and disadvantaged people in Rome.

The Vatican City State bought its own doses to vaccinate Holy See employees and their families, and has been giving away surplus supplies to homeless people. A masked Francis posed for photos with some of the volunteers and recipients in the Vatican audience hall.

Later Friday, Francis was to preside over the Way of the Cross procession in a nearly empty St. Peter’s Square, instead of the popular torchlit ritual he usually celebrates at the Colosseum.

In France, a nationwide 7 p.m. curfew is forcing parishes to move Good Friday ceremonies forward in the day, as the traditional Catholic night processions are being drastically scaled back or cancelled. Nineteen departments in France are on localized lockdowns, where parishioners can attend daytime Mass if they sign the government’s “travel certificate.”

Fire-ravaged Notre Dame will not hold a Good Friday mass this year, but the cathedral’s “Crown of Thorns” will be venerated by the cathedral’s clergy at its new temporary liturgical hub in the nearby church of Saint-Germain-l’Auxerrois.

In Spain, there will be no traditional processions for a second year in a row, and churches will limit the number of worshippers. Many parishes are going online with Mass and prayers via video streaming services.

In the Philippines, streets were eerily quiet and religious gatherings were prohibited in the capital, Manila, and four outlying provinces. The government placed the bustling region of more than 25 million people back under lockdown this week as it scrambled to contain an alarming surge in COVID-19 cases.

The Philippines had started to reopen in hopes of breathing life into its suffering economy, but infections surged last month, apparently because of more contagious strains, increased public mobility and complacency.

In Kenya, all churches were ordered to close as part of a ban on large gatherings to contain a worsening outbreak. Joseph Karinga went to his church anyway and prayed outside the shuttered doors, in a garden near a shrine to Mary.

“I will just say my rosary here and go home,” he said.

Left: Reverend Shahid Mehraj Dean leads an online Easter prayer in front of empty seats at the Cathedral Church of the Resurrection, after government limits congregational prayers and ordered to stay home, in efforts to stem the spread of the coronavirus disease (COVID-19), in Lahore, Pakistan, on April 12, 2020. Photo by Mohsin Raza/Reuters