It has been nearly three years since international leaders formed the historic Paris climate agreement, laying the groundwork to bolster the world’s response to global warming beginning in 2020.

But on Saturday, thousands of people in the United States and more than 90 other countries planned to take to the streets in 800 towns and cities to voice their concerns that those ambitions have fallen off track, and to call for immediate action on climate change.

The event, called the “Rise for Climate, Jobs and Justice,” was coordinated internationally to coincide with the start of the Global Climate Action Summit, a gathering of local and state and international leaders next week in San Francisco, where they will discuss their achievements seen around the world on climate change.

The climate advocacy group 350.org organized the worldwide effort on Saturday along with many other groups affiliated with the Peoples Climate Movement, calling for an end to reliance on fossil fuels and movement toward using renewable energy.

May Boeve, 350’s executive director, said the event will be attended by a coalition of environmental groups, labor unions and religious and human rights organizations whose members say many of the tenets of the climate pact are now being ignored, and that the world is not moving fast enough to stem the effects of climate change. She said that local leaders need do more to facilitate action on climate change, particularly after President Donald Trump said he would move to pull the U.S. out of the accord.

“It’s a chance for people all over the world to mobilize, to put pressure on elected officials at the local level, and to try and weigh ambitions about what’s being committed because we’re looking at a situation where climate impacts are very dramatically on the rise,” she said. “More and more people are beginning to realize that what scientists have been warning us about is happening right now, and we don’t have the commensurate level of commitment.”

This is what people power looks like: over 30,000 marching in San Francisco. We aren't going anywhere, and we're showing the solutions we need. #RiseforClimate. Press release: https://t.co/HRDNI2pMh0 pic.twitter.com/zCqYH2puXX

Amira Odeh, an organizer for 350 in Puerto Rico, said the island has felt the effects of climate change, including an increase in powerful hurricanes, drought and disappearing beaches because of sea level rise. “Puerto Rico is very aware of the impacts that climate [change] will have and have already started to have.”

Odeh said she expects more than 1,000 people to meet on Saturday in Vega Baja, a municipality in the northern section of the island that was hard-hit by Hurricane Maria last September, to push government leaders there to take action on climate change, including a focus on renewable energy projects. 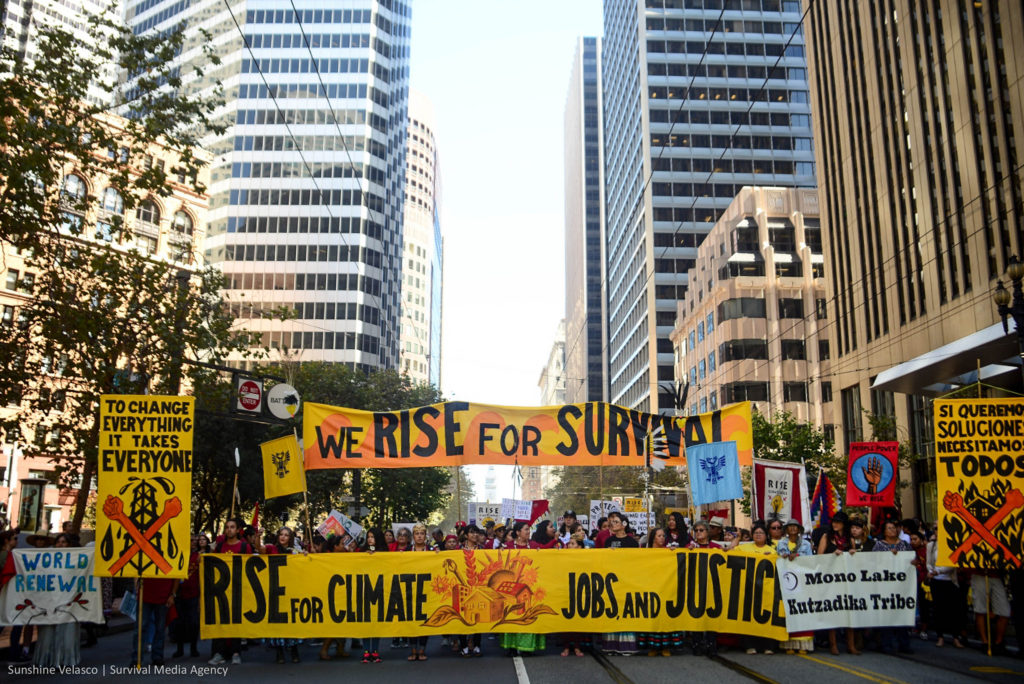 Thousands of people converged in San Francisco for the ‘Rise for Climate, Jobs, and Justice’ march, just days before the Global Climate Action Summit, demanding a phase-out of fossil fuel extraction and a just transition to a 100% renewable energy economy. Photo By Sunshine Velasco/ Survival Media Agency via 350.org

In San Francisco, protesters plan to march to urge California Gov. Jerry Brown to cut ties with the fossil fuel industry in a state known as a leader on environmental issues. And in New Orleans, a city that is no stranger to rising sea levels, a protest will focus on the construction of a planned Bayou Bridge Pipeline, according to Anne Rolfes, founding director of the Louisiana Bucket Brigade, who organized the demonstration in conjunction with 350. In Miami, hundreds of people were expected to attend a concert to bring awareness to the issue of renewable energy.

Salome Garcia, president of 350 South Florida, said the Miami concert is meant to apply pressure to the city’s mayor to commit to 100 percent renewable energy goals by 2050 with built-in labor standards.

“We’re largely an immigrant community, it’s an issue that impacts not only us, but people all over the world,” Garcia said. “It’s not enough to just talk about climate. We need to make people understand that climate, jobs and justice all need to be included.”

These gatherings, large and small, pushed for their own localized issues, all formed under the banner of climate change, Boeve said. She noted there has been some progress on the methods that would help assuage climate change, including an increase in renewable energy.

“But if we’re looking at the pace of change and the equity and who is benefiting, those are the pieces where we’re falling short,” she said. “We can actually use events like this to demonstrate we have more power, we’re doing more to get people involved.”