How a Rohingya mother escaped her village’s terrors in Myanmar

It was midnight on Aug. 25. As Dildar Begum, a 30-year-old housewife, tended to her six children and handicapped husband in their small hut in Western Rakhine, Myanmar, her neighbor Anuwara rushed in and warned her that the Myanmar forces were running an operation — burning down homes, killing and raping people in their village. Their only hope, Anywara warned, was to flee to Bangladesh.

But as Begum started to pack, several armed men showed up dressed in black and stormed through her house. “They started looting everything. We ran outside and before we knew it we watched our village set ablaze,” she said.

Frantic to avoid being shot and killed, Begum, her husband and children fled into the jungle to find a way into Bangladesh, leaving all their possessions behind. They trekked through the jungle for 14 days.

Desperate for food and water, Begum was spared some biscuits along the way by hundreds of thousands of other Rohingyas making the mass exodus. But it wasn’t enough to feed her twins. By the seventh day of her journey, her unnamed babies — just 45 days old — died in her arms.

By the seventh day of her journey, her babies — just 45 days old — died in her arms.

“I was too weak and hungry to breastfeed them. And the rain made my babies cold and hungry. They couldn’t endure,” Begum said.

With no time to grieve, she hurriedly buried her children in the middle of an unmarked rice paddy field for fear of the Myanmar military catching up to her family. She continued her journey with her remaining children.

On the final stretch of their journey at one of the main border crossing routes, she looked back at the scenic green mountains. Black smoke filled the air as villages continued to burn. She managed to get on a rickety boat run by a local Bangladeshi coyote who charged her 200 taka ($2) for the ride. Once she and her family got safely on land, she saw the mutilated bodies of some people who had stepped on landmines planted by the Myanmar military. 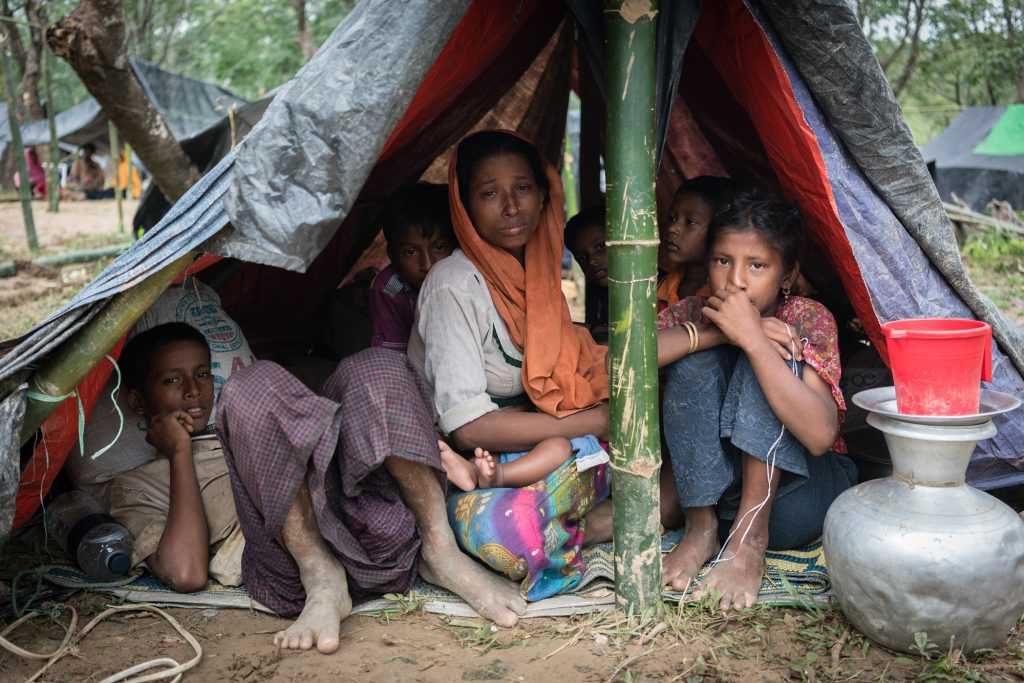 Rohingya refugees in a makeshift shelter. Photo by Phil Caller

Begum and other women told me of harrowing tales during my recent trip to the refugee camps in Bangladesh. Some described a baby being snatched and tossed into an open fire pit, and pregnant women being forced to give birth by people stomping on their bellies.

Some women said they had their breasts sliced, dodged grenades, and witnessed unarmed male family members being forced to sit in chairs and be burned alive. Begum herself said she witnessed Myanmar forces kill a child in front of her. “The army called the children over to give them biscuits, then they killed them and dumped their bodies into the jungle. That’s why I ran as fast as I could, so my remaining children could survive,” she said.

With the Myanmar government not allowing U.N. or journalists into the region, it’s hard to account for the number of casualties. But according to local human rights groups, more than 1,000 Rohingya were killed. (Human Rights Watch also is working to document the crisis.)

Today, Begum joins 500,000 Rohingya refugees living in Bangladesh, and like many, they arrived to nothing. Some locals threw clothes and crumbled biscuits from buses and trucks. The immense scale of the crisis meant that international aid organizations like the World Food Program have been the only ones equipped to respond.

WATCH: Myanmar’s Rohingya stuck in limbo between persecution and relocation

But even organizers like Bimol Chandra Day Sarker, the chief executive for Mutki, a subsidiary of the World Food Program, say they have been struggling, handing out barely 55 pounds of rice to the refugees. “There are so many households that are not getting rice because there isn’t any adequate support for them. We need more food, wash facilities and shelter,” he said.

These days Begum sleeps with her family and hundreds of thousands of others with the open sky as their home in the middle of the jungle. “I haven’t received any relief. I am in pain and my husband is sick. We don’t know what to do. We desperately need help,” she said.

Begum’s living situation in Bangladesh is precarious. She risks the threat of being kicked out of the land at any moment. Presently, she is squatting on local Bengali territory. Countless land disputes have erupted, preventing makeshift shelters from being set up. 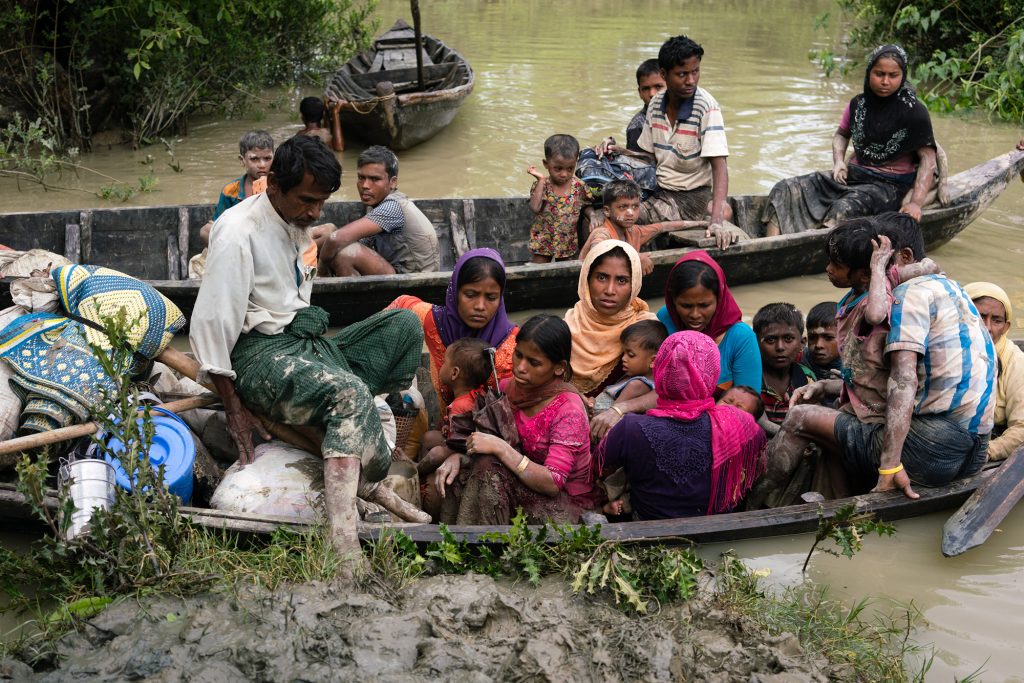 Local authorities like Mohammad Ershadul Haque, the council secretary of Teknaf, have expressed discomfort over the massive influx of Rohingyas. “The Rohingyas aren’t developed. Their character is uncivilized. We are different from them. If they continue coming like this, it will lead to destruction. They might claim Bangladesh to be Rohingya territory. Our freedom is under threat,” he said.

The Rohingyas are a stateless Muslim minority group who have long faced persecution in Myanmar. For 34 years they have been denied citizenship and freedom of movement. Forced into internment camps scattered throughout Buddhist majority Myanmar, hundreds of thousands have reported being tortured, beaten and raped. The Myanmar government views them as terrorists, and illegal Bengalis.

As a form of protest, the Arakan Rohingya Salvation Army, known as ARSA, launched a rebellion against the Myanmar government by attacking dozens of police and army posts across Myanmar’s Rakhine state on Aug. 25. In response, the Myanmar military and Buddhist vigilante groups launched a counterinsurgency campaign.

Nobel laureate and de facto Myanmar leader Aung San Suu Kyi said in a recent statement, “We condemn all human rights violations and unlawful violence. We are committed to the restoration of peace and stability and rule of law throughout the state.” But she didn’t mention the widely reported abuses by the Myanmar military and Buddhist groups against the Rohingyas. 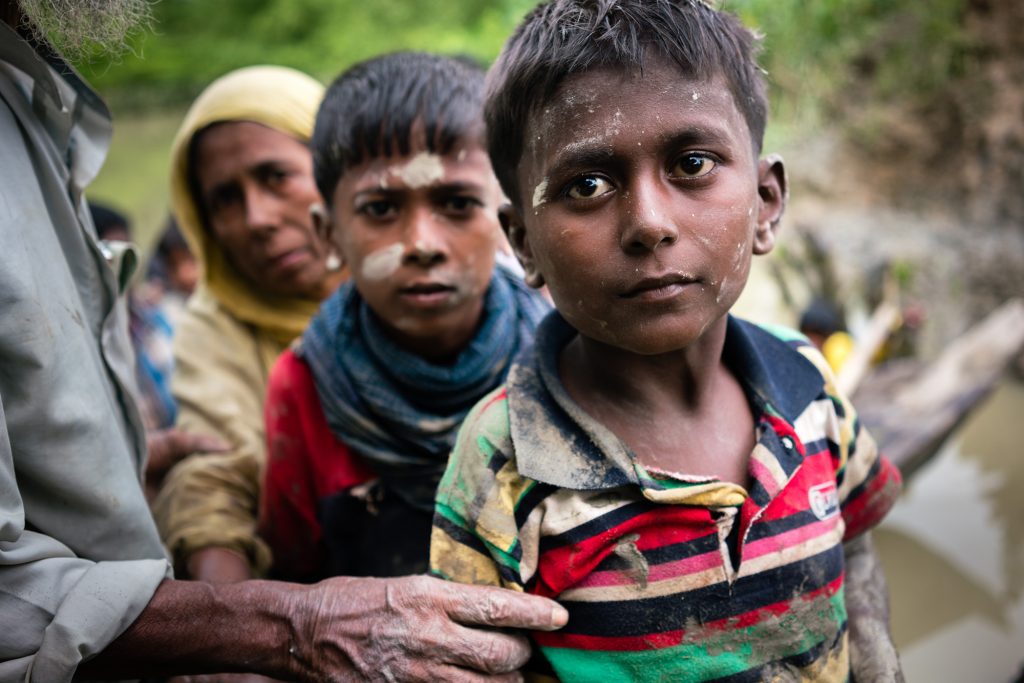 Hundreds of thousands of Rohingya refugees are pouring into Bangladesh, one of the poorest and most densely populated countries in the world, with a population of 160 million. Bangladesh’s Prime Minister Sheikh Hasina has asked the international community to put pressure on the Myanmar government to take the Rohingya Muslims back. Before this mass exodus, she had planned on sending the Rohingyas to remote islands. Now, with such a large influx, it’s hard say what will happen next.

Hundreds of thousands of Rohingya refugees are pouring into Bangladesh, one of the poorest and most densely populated countries in the world.

Human Rights Watch released a satellite map showing more than 288 Rohingya villages burnt to ash by the Myanmar military since Aug. 25. U.N. officials say these attacks by the Myanmar forces is a systematic cleansing to not allow the Rohingyas back into Myanmar.

Begum says she doesn’t want to live in Bangladesh. She wants to return to her home in Myanmar. Stateless and homeless, she continues to struggle to survive, with the hope of rebuilding a life for herself and her family with the haunting images of what they left behind.