Column: Trump’s plan for Afghanistan isn’t fresh, and here’s why

KABUL — The Trump administration’s announcement of a new Afghanistan policy turned out to be a bit of an anticlimax. President Donald J. Trump was desperate for a fresh approach. He did not find one for the simple reason that one does not exist.

The president began his speech Monday night by venting his “frustration over a foreign policy that has spent too much time, energy, money — and most importantly, lives — trying to rebuild countries in our own image instead of pursuing our security interests above all other considerations,” and he admitted that his “original instinct was to pull out.” But his national security team stressed to him the dire consequences of a U.S. pullout.

Simply leaving Afghanistan would risk squandering all that American troops have fought for since 2001. “Our nation must seek an honorable and enduring outcome worthy of the tremendous sacrifices that have been made, especially the sacrifices of lives,” Trump said. Clearly his advisers had counseled Trump to avoid the mistake that President Obama made in 2011 when he pulled out U.S. forces from Iraq, allowing the rise of the self-proclaimed Islamic State. “A hasty withdrawal,” Trump said, “would create a vacuum” that terrorist groups like the Islamic State and al-Qaida would fill, much as al-Qaida did when it used Afghanistan to plot the Sept. 11, 2001, attacks on the United States. Trump went on to repeat a point often made by U.S. generals: “Today, 20 U.S.-designated foreign terrorist organizations are active in Afghanistan and Pakistan, the highest concentration in any region anywhere in the world.”

Trump did not mention it in his speech, but he had seriously entertained the possibility of pursuing the mission in Afghanistan not with U.S. troops but instead with contractors, a proposal made by Erik Prince, founder of the private security firm Blackwater, and pushed by White House strategist Steve Bannon. But Bannon’s recent departure from the administration undercut support for that option, which was resisted by National Security Advisor H.R. McMaster, Secretary of Defense Jim Mattis, Chairman of the Joint Chiefs of Staff General Joseph F. Dunford Jr., and all of the other generals involved in Afghanistan policy.

Trump adopted the strategy crafted by McMaster and Mattis, both of whom served in Afghanistan.

Given that there are already far more contractors in Afghanistan (some 26,000) than U.S. troops (10,000), and given the spotty track record of contractors, including Blackwater, in both Afghanistan and Iraq, there is no reason to think that turning the Afghanistan mission over to them would have increased the odds of success. And it would have added fresh hazards, since it would be unclear under what authorities contractors would operate, how they would be disciplined for illegal conduct, and who would rescue them if they were in danger of being overrun or killed.

Trump adopted the strategy crafted by McMaster and Mattis, both of whom served in Afghanistan. The most important commitment that Trump made was to shift from a time-based approach on troop withdrawals to one based on conditions — meaning that the U.S. will only take out troops if the security situation improves. This was a sharp and welcome break from what President Obama did: In 2009, he ordered a surge that brought the number of troops to 100,000, nearly three times as many as when he took office, but he also announced that the reinforcements would start coming home within 18 months. And he stuck with that timetable despite the real progress underway in the Taliban’s strongholds in Helmand and Kandahar provinces. By telegraphing the troops’ departure so far in advance, the president simply encouraged the Taliban to wait them out.

In keeping with his vow to be vague, Trump did not spell out how much of an increase in U.S. force levels would take place under his watch. But by endorsing the Pentagon’s plans, he is widely expected to send an extra 3,900 troops — the number requested by General John W. Nicholson Jr., the senior U.S. and North Atlantic Treaty Organization commander in Kabul. Other allies are likely to send a smaller number of reinforcements, as well, to join NATO’s Resolute Support mission, which advises and supports the Afghan National Defense and Security Forces. (Another 2,000 or so U.S. troops, primarily Special Operations forces, are pursuing a unilateral counterterrorism mission known as Operation Freedom’s Sentinel.)

President Obama had been focused on initiating peace talks with the Taliban, another pillar of policy that Trump repudiated. “Someday, after an effective military effort, perhaps it will be possible to have a political settlement that includes elements of the Taliban in Afghanistan,” he said, “but nobody knows if or when that will ever happen.” This was a welcome signal of resoluteness, even if it was somewhat undercut by Trump’s past flirtation with complete withdrawal and his evident reluctance to endorse his generals’ plan. 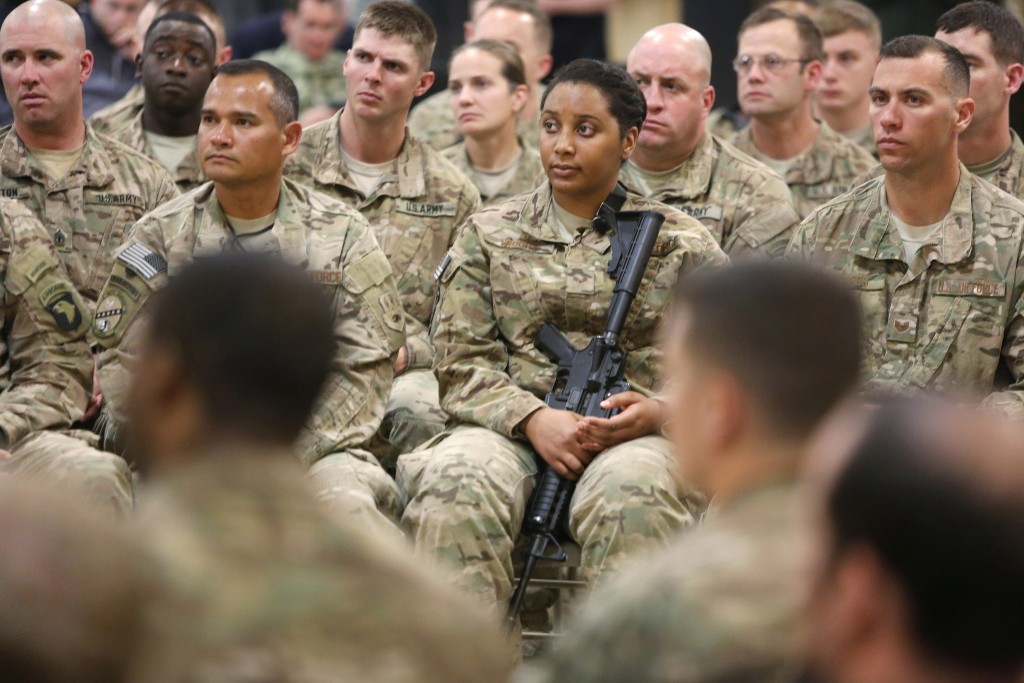 Trump was in agreement with Obama on one major point, eschewing nation-building. Trump put this bluntly: “We are not nation-building again. We are killing terrorists.” Those words ring hollow, however, given the reality that neither Obama nor Trump had any interest in having the U.S. military carry the full burden of fighting the Taliban. Both presidents have put their faith in supporting the ANDSF to make them the primary combatants against the insurgency. But to have soldiers and police capable of sustained operations, Afghanistan must also have Defense and Interior Ministries capable of supporting them, along with training camps, supply depots, logistics systems, intelligence capabilities, and all the other instruments of power that can only be supplied by a functioning government. In effect, Trump was continuing an unstated commitment to nation-building when he said, “America will continue its support for the Afghan government and the Afghan military as they confront the Taliban in the field.”

Trump also continued the ritual started by President George W. Bush’s administration of demanding that Pakistan end its support for insurgents in Afghanistan without having any clear idea of how to accomplish that. The Trump administration has already held up $350 million in military aid, but there is no evidence that this financial pressure will cause a change in Pakistan’s fundamental policy, which it has been pursuing since the 1990s, of supporting the Taliban as a proxy for its interests in Afghanistan.

The Trump administration is now considering other steps, including sanctioning individual Pakistani officials and more freely bombing insurgent groups in Pakistan, but Trump did not announce either measure on Monday night. This is a sign of how controversial such policies remain. There have always been powerful countervailing arguments that the United States cannot afford to alienate Pakistan, because it is a supply route for U.S. forces in Afghanistan and because it cooperates with the United States against some transnational terrorist groups, such as al-Qaida and the Islamic State. Trump thus essentially left U.S. policy toward Pakistan unchanged.

The final policy pillar that Trump announced was a bit more of a break with Obama’s. Trump vowed not to micromanage the fight from Washington and to “expand authority for American armed forces to target the terrorists and criminal networks that sow violence and chaos throughout Afghanistan.”

This was a reference to the rules that Obama imposed as he withdrew U.S. forces; he mandated that the United States could only undertake offensive air strikes against transnational terrorist groups, such as the Haqqani network and al-Qaida, not the Taliban, unless U.S. troops were in harm’s way. More recently, Obama granted U.S. forces the authority to hit the Taliban if Afghan military units were in extreme danger, but Trump’s speech suggests that military commanders may soon be granted the authority to bomb the Taliban as part of offensive operations. Other rules, such as those restricting counterbattery fire in response to attacks on U.S. bases, may also be relaxed.  Trump would no doubt be happy to scrap rules designed to limit collateral damage from air strikes. But the generals are not seeking a return to the free-fire zones of the Vietnam War: They remain committed to the calibrated and careful use of force, so, in practice, this pillar of Trump’s strategy will make a difference only at the margins.

Trump’s speech represents more a minor recalibration than a wholesale rethinking of U.S. policy in Afghanistan. The changes that will result are minimal. General Nicholson is likely to increase the number of U.S. advisors who will work with Afghan brigades and battalions in the field rather than simply with the corps-level headquarters, which are far removed from combat. Nicholson is also likely to increase the U.S. airpower available to support Afghan forces while continuing to expand Afghanistan’s own air force and double the size of its special operations forces. This should increase the capacity of the ANDSF, but it will not lead to a radical realignment on the battlefield. The Taliban today control 11 percent of the country’s population and contest another 29 percent, comprising some 14 million Afghans, and, absent a far more ambitious U.S. surge, the insurgency cannot be significantly rolled back. At best, the modest Trump buildup will prevent further deterioration of the government’s position. It will not allow the president to achieve his fervent desire to “win” the war.

Trump’s speech represents more a minor recalibration than a wholesale rethinking of U.S. policy in Afghanistan.

Trump seemed to acknowledge as much in his carefully worded speech: “From now on, victory will have a clear definition. Attacking our enemies, obliterating ISIS, crushing al-Qaida, preventing the Taliban from taking over Afghanistan, and stopping mass terror attacks against America before they emerge.” Note that while vowing to “obliterate” the Islamic State and “crush” al-Qaida — terms that have no strict military definition — Trump pointedly did not promise to defeat the Taliban. The most he said is that he would prevent them “from taking over Afghanistan.”

The Trump administration has concluded that it can live with a situation that even U.S. generals describe as a “stalemate,” because the cost of victory — sending hundreds of thousands of additional troops — is too high for the United States to pay and might be impossible to achieve in any case, given that the Taliban continue to enjoy outside support, not only from Pakistan but also from Iran and Russia. In short, a war that started 16 years ago will continue indefinitely with no victory in sight, because from Washington’s perspective there is simply no viable alternative.

This column first appeared on Aug. 22 on the Council on Foreign Relations’ website.

Max Boot is the Jeane J. Kirkpatrick senior fellow for national security studies at the Council on Foreign Relations.