JOHANNESBURG — Congolese rebels killed 15 civilians and abducted a dozen children in an attack at the center of the latest deadly Ebola outbreak, Congo’s military said Sunday, as the violence threatened to again force the suspension of crucial virus containment efforts.

“We condemn this attack,” said the World Health Organization’s director-general, Tedros Adhanom Ghebreyesus. “Everyone should work on achieving peace and fight Ebola.”

Angry over the killings, Beni residents on Sunday carried four of the bodies to the town hall, where police dispersed them with tear gas. Vehicles of aid organizations and the peacekeeping mission were pelted with stones, the U.N.-backed Radio Okapi reported.

The ADF rebels have killed hundreds of civilians in recent years and are just one of several militias active in Congo’s far northeast.

Late last month, Ebola outbreak containment efforts were suspended for days in Beni after a deadly attack, complicating work to find and track suspected contacts of infected people. Since then, many of the new confirmed Ebola cases have been reported in Beni as the rate of new cases overall has more than doubled, alarming aid groups.

The latest attack comes after two medical agents with the Congolese army were shot dead — the first time health workers have been killed by rebels in this outbreak.

It is a “dark day” for everyone fighting Ebola, Congo’s health minister said late Saturday while announcing the deaths.

Mai Mai rebels surged from the forest and opened fire on the unarmed agents with the army’s rapid intervention medical unit at an entrance to Butembo city, the health ministry said. 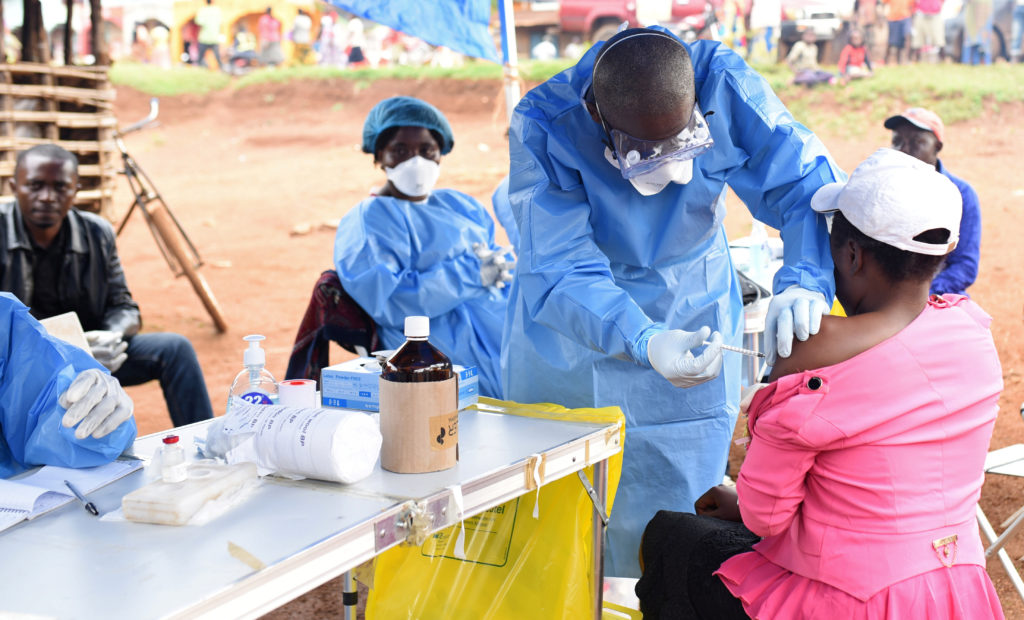 A Congolese health worker administers Ebola vaccine to a woman who had contact with an Ebola sufferer in the village of Mangina in North Kivu province of the Democratic Republic of Congo, August 18, 2018. REUTERS/Olivia Acland – RC114C777860

Health workers in this outbreak, declared on Aug. 1, have described hearing gunshots daily, operating under the armed escort of U.N. peacekeepers or Congolese security forces and ending work by sundown to lower the risk of attack.

Congo’s health ministry has reported “numerous aggressions” against health workers. Early this month two Red Cross volunteers were severely injured in a confrontation with wary community members in a region traumatized by decades of fighting and facing an Ebola outbreak for the first time.

“Health agents are not a target for armed groups,” Health Minister Oly Ilunga said on Saturday. “Our agents will continue to go into the field each day to fulfill the mission entrusted to them. They are true heroes and we will continue to take all necessary measures so that they can do their job safely.”

On Wednesday, WHO said it was “deeply concerned” by the outbreak but announced it does not yet warrant being declared a global emergency. An outbreak must be “an extraordinary event” that might cross borders, requiring a coordinated response. Confirmed cases have been found near the heavily traveled border with Uganda.

In the latest example of the rumors that pose another serious challenge to containing the virus, the health ministry said 22 youth in Butembo dug up the body of an Ebola victim and opened the body bag, “wanting to verify that no organs had been taken from the body by health workers.”

They ended up touching highly infectious bodily fluids, the ministry said. “The next day, they agreed to be vaccinated,” joining the more than 20,000 people who have received vaccinations so far.