American immigration courts are gearing up to decide the fate of tens of thousands of children from Central America who came to the United States border in recent months. Meanwhile, Mexico has been cracking down on these migrants en route north, and is already sending children back to their home countries. In the state of La Paz, El Salvador, one boy returns to his hometown that has been ravaged by gang violence. 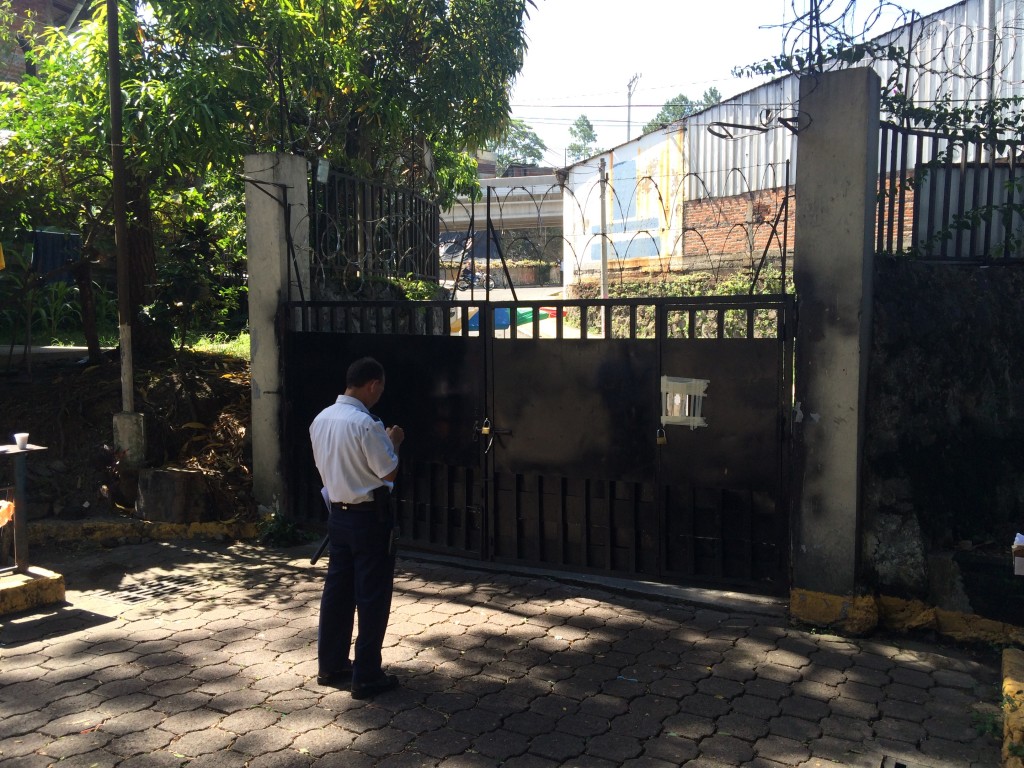 A guard stands wait outside of the deportation processing center in San Salvador. José was bused here in August after being caught in Mexico. Photo by Jude Joffe-Block/Fronteras

Editor’s note: This story was originally published on Sept. 12 by Fronteras. We checked up on Jose today and his mother told us that the family is safe but she is still worried about her son’s future. A White House memo released this week outlines a plan to allow a limited number of children in Central America to be screened in their home countries to see if they qualify for refugee status in the U.S. The option would only be available to those with relatives who are already legally present in the United States. According to the White House, that plan is part of a strategy to reduce “unlawful and dangerous migration to the United States.”

EL SALVADOR — There’s an important bridge in this rural town in the Salvadoran state of La Paz.

Locals say the bridge divides the town between two rival gangs, on one side, a gang tied to MS-13, and on the other, one affiliated with Calle 18 — translated as the 18th Street gang.

These gangs originated in Los Angeles and have overrun El Salvador.

On the day that we visited this bridge, a man on a bike rode up, staring at us. He was wearing the white Nike shoes that only gangsters wear here. He stopped near us, still staring, and made a call on his cell phone.

This spooked our driver, who is from the capital San Salvador. He motioned for me to stop recording and get in the car.

We drove away quickly to avoid any possible trouble.

But for many who live here, getting away from the gangs isn’t so simple.

“The way things are now, going out into the street means danger, or death,” said José, a 16-year-old from this town who tried escaping to the United States twice this summer. 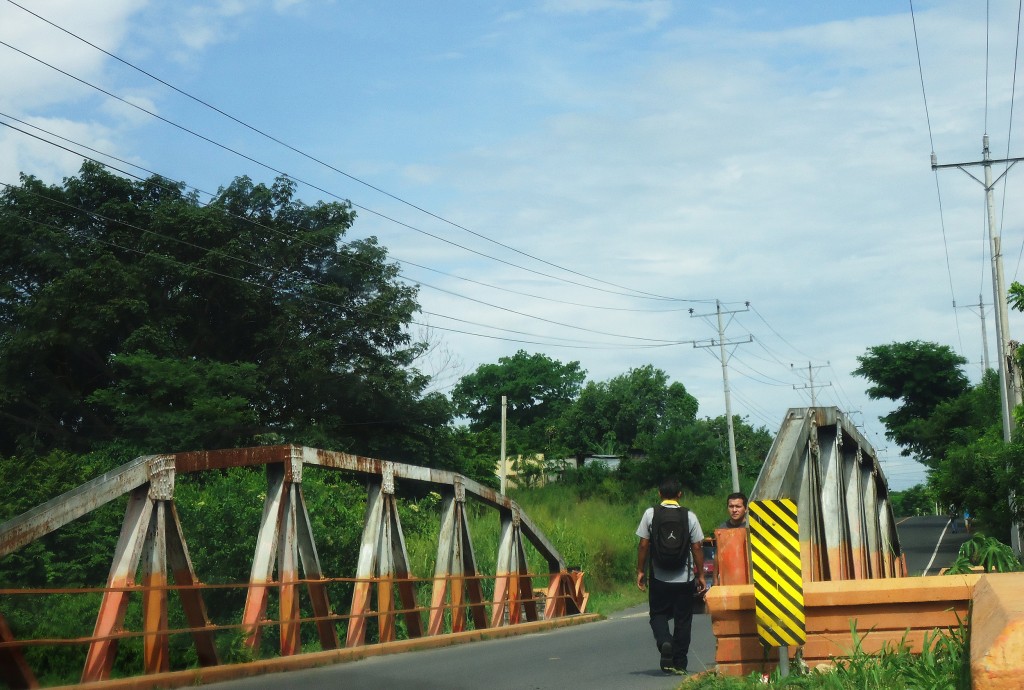 His uncles in Virginia paid a smuggler to bring him. But both times he tried, he was caught by Mexican authorities.

José has a thin frame, a shy smile and could pass for younger than 16. He likes science, 1980s music and soccer, though he admits he’s never had the chance to play on a real team.

We met him on a sunny day in August, just one day after he was deported back. He and his cousin had been caught together on a bus in the Mexican state of Veracruz on José’s 16th birthday.

An attempt to bribe the Mexican officers didn’t work.

Buses carrying children who were turned back in Mexico arrive in El Salvador twice a week.

“We offered them 1,000 pesos each but they wouldn’t take it,” José said. Five days later, José and his cousin were bused back to El Salvdador.

Now that José is back, he is trying to keep it a secret.

“Because if they find out I’m here, they might come to look for me, and come to my house at night,” José said. “That’s what I don’t want to happen. It’s one thing if they want to hurt me. But they could hurt my whole family.”

The “they” he is referring to are MS-13 gangsters — mostly other teenagers — who control the other side of the bridge.

José said he’s never been in a gang, but the MS-13 members are convinced he is part of the gang on his side of the bridge, and have promised to kill him.

We are only using José’s first name, since he is hiding from gang members.

It was hard to find a safe place to even interview José. In this small town, visiting his house would have drawn attention. And he didn’t want to be anywhere public, either.

Ultimately, José and his mother agreed to speak to us at a nearby hotel that caters to tourists.

“There aren’t people from here at this hotel,” José said. “Just people from other countries. It’s expensive, so we’ve never even been inside here until now.”

We sat behind a big tree on the edge of the hotel grounds.

José said even though he’s only been back in the country for 24 hours, he’s already had his first scare.

It happened on his ride home from the government deportee processing center in El Salvador’s capital the day before. His mother and an aunt picked up him and his cousin there, and on the way home, they stopped at another relative’s house.

There, a group of five unknown gang members circled their pickup truck and questioned them.

“It was just because we are young guys and aren’t from the area,” José said. “And when they see a young guy they don’t know, they assume he was sent by the rival gang.”

José said the gang members made calls to some of José’s relatives and decided he and his cousin weren’t a threat and left them alone.

But he said it could have ended differently.

“The same day that I returned to El Salvador, I also could have lost my life,” José said. 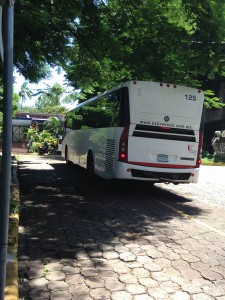 If it sounds like José is paranoid, keep this in mind: UNICEF recently found El Salvador to be the most murderous country in the world for children under age 19. It has a child murder rate of 27 per 100,000 residents, compared to 4 per 100,000 in the U.S.

According to the same report, homicide is the leading cause of death among adolescent boys in El Salvador.

As El Salvador prepares for an influx of child deportees from the U.S., a challenge for the government is how to ensure the safety of those arriving back who fled out of fear.

When José arrived at the deportee processing center, he told government officials in various interviews that he left the country because of gang threats.

José said officials did speak to him about his living situation in El Salvador.

His plan was to ultimately go stay with relatives in another town where he would feel safe. But he didn’t have a way to get there right away, so that first day back, he went back to his mother’s house, where he had been threatened.

According to José, the officials did not explicitly ask him whether he had a safe place to go his first night back in the country.

The government agency tasked with interviewing and evaluating children’s well-being at the deportation processing center, the National Council of Children and Adolescents, known as CONNA, did not respond to an interview request from Fronteras Desk. 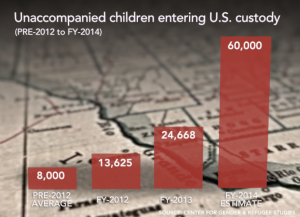 More than 52,000 unaccompanied children were caught trying to cross the southern U.S. border in the first five months of this year. Read about what’s behind this surge of migrants.

José’s problems started two years ago when he had to cross the bridge — and into MS-13 territory — to go to school. José said one day a classmate who was linked with MS-13 brought a gun to school. The principal found out, and the classmate accused José of ratting him out.

“They came looking for me with a shotgun and they told me to never come back,” José said. “They said I was spying for the other gang.”

His mother withdrew him from that school right away. José switched to a school that only met on Sundays.

José’s biggest scare came almost a year later when he said another boy — a boy who looked so like José, everyone called them twins — was gunned down in the street by MS-13.

That boy was actually a member of the 18th Street gang, and José wasn’t. But José was told he would be next.

For the next month he was too scared to step outside his mother’s house. Then he started living in another town with relatives.

He and his mother thought about reporting the threats to the police, but family members warned them not to.

“We were going to go,” José said. “But we didn’t because there are gang members in the police, too. You can’t trust anyone right now.”

José will leave this town soon to stay with relatives in another town. He hopes to learn carpentry. He’s disappointed by how much school he has missed and wants to keep going on Sundays.

But he hasn’t completely given up the dream of trying to make it to the U.S.

He and his mother, a widowed seamstress, have a prized possession: a letter, in English, from the U.S. Social Security Administration.

Before José’s father died several years ago, he worked in the U.S. and was a legal U.S. resident.

Because of that, José could be eligible for Social Security benefits, but only if he lives in the U.S.

The letter is certainly not the ticket into the U.S. that José wishes it was. But it remains a slender hope, a piece of paper that gives him a connection to a country he’s never seen, and can’t seem to reach.

Another version of this story aired on PRI’s “The World”