ANKARA, Turkey — The death toll from a strong earthquake that rocked eastern Turkey climbed to 22 on Saturday as rescue crews searched for people who remained trapped under the rubble of collapsed buildings, officials said.

Speaking at a televised news conference near the epicenter of the quake in Elazig province, Interior Minister Suleyman Soylu said 18 people were killed in Elazig and four in neighboring Malatya.

Some 1,103 people were injured, with 34 of them in intensive care but not in critical condition, Health Minister Fahrettin Koca said.

Turkish President Recep Tayyip Erdogan attended the funeral of a mother and son killed in the quake while visiting the hardest-hit areas. He warned people against repeating “negative” hearsay about the country being unprepared for earthquakes.

Various earthquake monitoring centers gave magnitudes ranging from 6.5 to 6.8. for the earthquake, which hit Friday at 8:55 p.m. local time (1755 GMT) near the Elazig province town of Sivrice, the Turkish Disaster and Emergency Management Presidency (AFAD) said.

It was followed by 398 aftershocks, the strongest of them with magnitudes 5.4 and 5.1, the disaster agency said.

Emergency workers and security forces distributed tents, beds and blankets as overnight temperatures dropped below freezing in the affected areas. Mosques, schools, sports halls and student dormitories were opened for hundreds who left their homes after the quake.

“The earthquake was very severe. We desperately ran out (of our home),” Emre Gocer told the state-run Anadolu news agency as he sheltered with his family at a sports hall in Sivrice. “We don’t have a safe place to stay right now.” 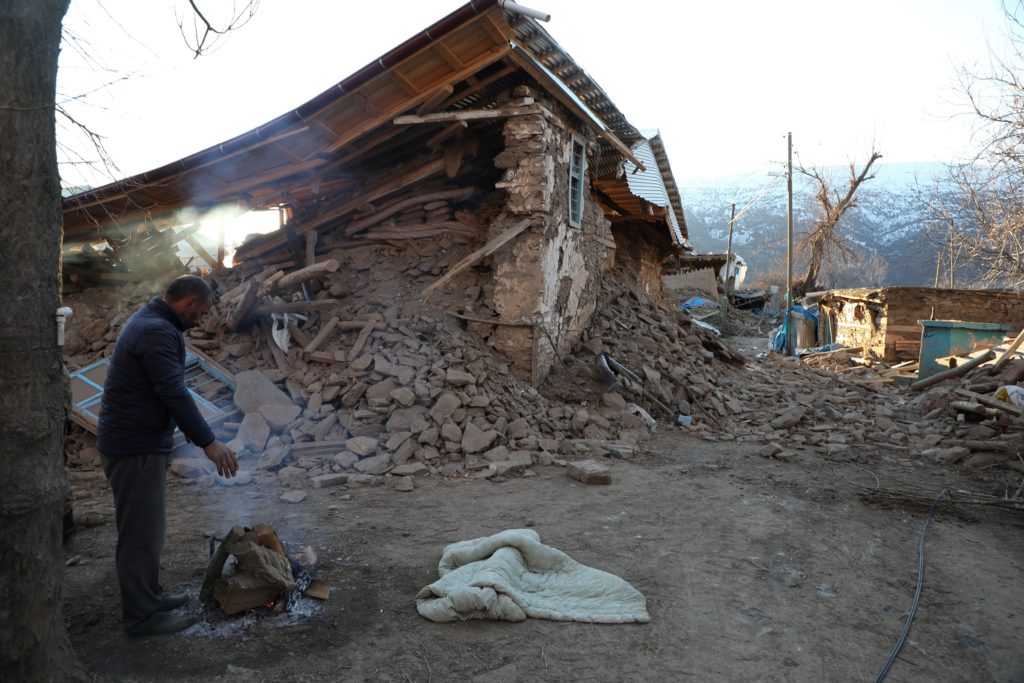 A villager stands next to his collapsed house after an earthquake in Sivrice near Elazig, Turkey, January 25, 2020. Photo by Sertac Kayar/Reuters.

Erdogan on Saturday afternoon visited Sirvice and the city of Elazig, the provincial capital located some 565 kilometers (350 miles) east of Ankara. The Turkish leader promised state support for those affected by the disaster.

“We will not leave anyone in the open,” he said.

Earlier, a prosecutor in the capital Ankara announced an investigation into “provocative” social media posts. The Anadolu news agency reported that Turkey’s broadcasting authority was also reviewing media coverage of the quake.

At least five buildings in Sivrice and 25 in Malatya province were destroyed in the disaster, Environment and Urbanization Minister Murat Kurum said. Hundreds of other structures were damaged and made unsafe.

Television footage showed emergency workers removing a woman from the wreckage of a collapsed building 19 hours after the main earthquake struck.

A prison in Adiyaman, 110 kilometers (70 miles) southwest of the epicenter, was evacuated due to damage its more than 800 prisoners transferred to nearby jails.

AFAD said 28 rescue teams had been working around the clock. More than 2,600 personnel from 39 of Turkey’s 81 provinces were sent to the disaster site. Unmanned drones were used to survey damaged neighborhoods and coordinate rescue efforts.

“Our biggest hope is that the death toll does not rise,” Parliament Speaker Mustafa Sentop said.

Neighboring Greece, which is at odds with Turkey over maritime boundaries and gas exploration rights, offered to send rescue crews to assist the Turkish teams.

Erdogan appeared to reject the offer of outside assistance during his visit to the city of Elazig, telling reporters, “Our state does not need anything.”

A magnitude 6 earthquake killed 51 people in Elazig in 2010.

Left: Search and rescue teams work on a collapsed building after an earthquake in Elazig, Turkey, January 25, 2020. Photo by Sertac Kayar/Reuters.