As President Donald Trump prepares to fly to Thursday’s NATO summit in Brussels, he and his 27 counterparts should look at a new poll of public attitudes on both sides of the Atlantic about their alliance, and about the threat posed by Russia.

A Pew Research Center survey released this morning shows public support for NATO has jumped substantially in the past year – from 7 to 10 percentage points — in the US, Canada and five of six European alliance members: France, Germany, the Netherlands, Poland, and the United Kingdom. NATO is viewed favorably by a whopping 60 to 79 percent in all those nations. (Spain –- preoccupied with its economic woes — is the outlier, with support for NATO holding consistently around 40 percent.) 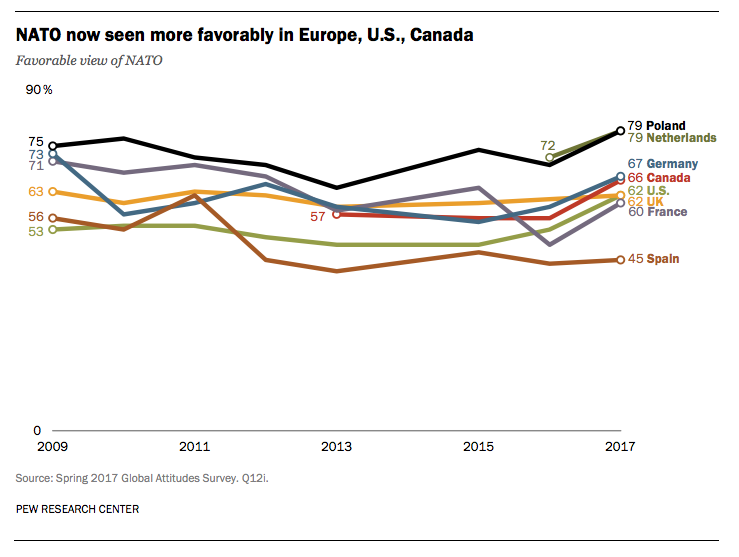 What’s more, majorities or pluralities in all but one country think NATO should come to the defense of a member that gets into a serious military conflict with Russia, and that their own country should take part.

These findings are remarkable given that both polls, taken in springtime 2016 and 2017, occurred during an American presidential campaign that saw candidate Donald Trump frequently deriding NATO as “obsolete” and as strong populist movements were driving the Brexit campaign in the United Kingdom and presidential campaigns in the Netherlands and France.

“The good news here is that there’s a political base to sustain the free world order and that candidate Trump’s militant isolationism hasn’t taken hold,” said Daniel Fried, former assistant secretary of state for Europe in the George W. Bush and Obama Administrations. The “raw material” for support is there, he says, “but it’s not so solid that we can rest easy. It means we have go out and sell it.”

The big unknown is, if the U.S. and its allies are put to the test, will President Trump take up that challenge?

What’s driving this stronger solidarity? All arrows point to growing trepidation about Russia, which invaded and annexed Crimea in 2014, is now supporting a rebellion in Eastern Ukraine and tried to manipulate elections in the U.S. and several European countries. Russia is viewed as a threat in all countries surveyed (except Spain) by huge majorities of 77 percent to 91 percent.

Yet there are warning signs for NATO too. A majority in Germany — with the fourth largest military in Europe — would not support coming to the aid of a NATO partner in a military conflict with Russia. And in the U.S., feelings about NATO have become deeply polarized. Some 81 percent of self-professed “liberals” support the alliance, but only 48 percent of “conservatives” do, no doubt reflecting the fallout from the Russia election meddling controversy. Another warning sign: support for defending a NATO ally against Russia is much higher among Americans over 50 than in the under-30 group. 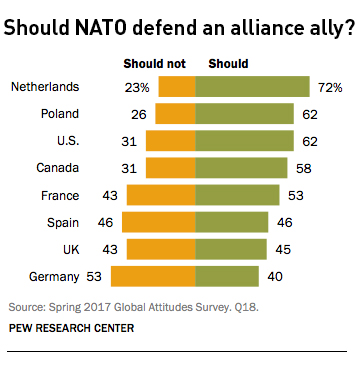 Since becoming president, Mr. Trump has shifted his rhetoric about NATO, saying he supports the alliance while still calling on other countries to spend more on defense. But his earlier anti-NATO rhetoric clearly has had an effect on Europeans’ confidence in America’s backing. A majority of Europeans polled believe the United States would ride to any NATO member’s defense in conflict with Russia. But those majorities are lower than they were in 2015.

“Defending the free world order we helped build after World War II is going to require sacrifice,” Fried said. “It’s not a free ride. Each generation has to be shown why it’s important.”

The big unknown is, if the U.S. and its allies are put to the test, will President Trump take up that challenge?