PARIS — For many yellow vest protesters, the stinging sadness that came with the devastating fire at Notre Dame Cathedral has quickly given way to boiling anger.

Some of the activists, whose violent protests against inequality have been shaking up France for months, said they cried in front of their TV sets as they watched the Gothic architectural masterpiece being consumed by flames Monday night.

Despite their struggles to make ends meet, some even made small donations for the restoration of the iconic building.

But they also felt unheard when French President Emmanuel Macron addressed the nation to speak about the fire, instead of laying out his response to the social crisis that has fueled their protests since last November.

And they felt even more outraged when, in just a few hours, billionaires pledged hundreds of millions of dollars (euros) to help restore the damaged cathedral while their demands remain unsatisfied in their longstanding fight with the French government.

“You’re there, looking at all these millions accumulating, after spending five months in the streets fighting social and fiscal injustice. It’s breaking my heart,” Ingrid Levavasseur, a founding leader of the movement, told The Associated Press ahead of another round of planned protests across France this weekend.

Interior minister Christophe Castaner said 60,000 police officers will be mobilized on Saturday across France, and demonstrations near Notre Dame will be banned as he expects some protests to turn violent.

“What happened at Notre Dame is obviously a deplorable tragedy. But nobody died,” Levavasseur said. “I’ve heard someone speaking of national mourning. Are they out of their minds?”

The blaze at Notre Dame has sent a shockwave through France, but Levavasseur believes the image of unbroken national unity that arose in the aftermath of the fire is being politically exploited by Macron. 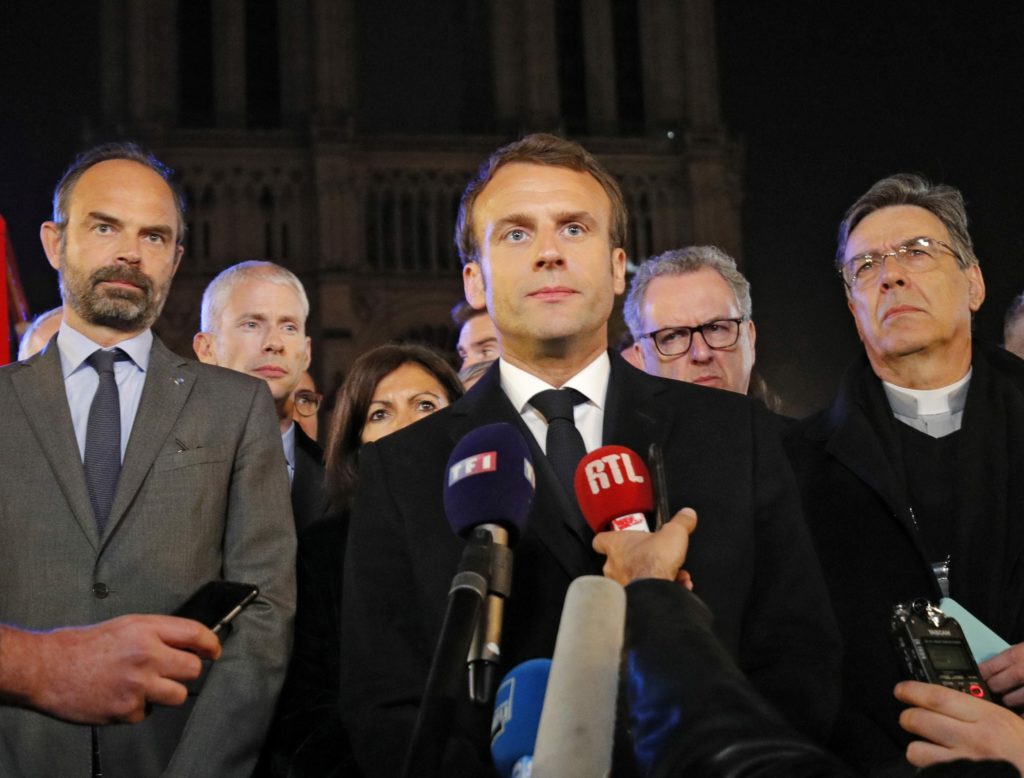 French President Emmanuel Macron speaks in front of the Notre Dame Cathedral in Paris on April 15, 2019. Photo by REUTERS/Philippe Wojazer/Pool

“It took him less than 24 hours to speak about the fire, while he made us wait for three weeks before addressing our issues,” she said.

Decrying the struggles of low-paid workers and pensioners and accusing Macron’s government of favoring the rich, yellow vest activists — named after the fluorescent jackets French motorists are required to keep in their cars — have been protesting for 22 consecutive weekends.

Frustrated by the lack of government response, Levavasseur has stopped attending demonstrations in recent weeks but is considering returning to the streets on Saturday because of an even greater sense of being overlooked since the Notre Dame tragedy.

And she’s not the only one feeling this way.

“The yellow vests will show their anger against the billion found in four days for stones, and nothing for the needy,” wrote Pierre Derrien on the Facebook page of a yellow vests group based in the southern city of Montpellier.

WATCH: Amid the ashes, France vows ‘resurrection’ for Notre Dame

France’s richest businessman, Bernard Arnault, and his luxury goods LVMH group pledged 200 million euros ($226 million) for the reconstruction. Billionaire Francois Pinault and his son, Francois-Henri Pinault, said they were giving 100 million euros from Artemis, the holding company that owns the Christie’s auction house and the main shareholder of luxury fashion houses, including Gucci.

“If they can give dozens of millions to rebuild Notre Dame, they should stop telling us there is no money to respond to the social emergency,” CGT trade union leader Philippe Martinez said.

More than $1 billion has been pledged for the cathedral’s restoration, and many French citizens believe the money could be better spent elsewhere. Some have also criticized the billionaires’ donations because their pledges make them eligible for huge tax deductions.

The Pinault family has said, however, they will not ask for a tax deduction for their donation to Notre Dame, and Arnault said his family holding company was not eligible for tax breaks because it has already reached the limit for deductions.

Anti-rich messages have flourished on social media in recent days as yellow vest protesters coordinated their action for the weekend.

In fact, taxes have been one of the most pressing issues of the yellow vest movement, which has lashed out at Macron for favoring the rich by eliminating a wealth tax as part of his economic stimulus plan, while average French workers have seen their living standards decline.

Anti-rich messages have flourished on social media in recent days as yellow vest protesters coordinated their action for the weekend.

“A little message for all the patrons (Pinault, Arnault and the others), hospitals are on strike because they lack means, so if you can make a gesture…” a Facebook user wrote.

Meanwhile, dozens of others exhorted wealthy donors to be more generous with France’s underclass.

“Victor Hugo thanks all the generous donors ready to save Notre Dame and proposes that they do the same thing with Les Miserables,” they wrote on their social media pages, quoting French writer Ollivier Pourriol and his droll reference to Hugo’s famous novels about the cathedral and the lives of the poor.

Tristan, a yellow vest supporter who declined to give his full name for fear of being identified by police after he was banned from traveling to Paris during weekends to attend demonstrations, prefers to stay away from the polemics.

He made an 80-euro (nearly $90) donation to Notre Dame — quite a lot of money for the 29-year-old, who works in construction and does frequent night shifts to put butter on his bread.

“I’m a Catholic, I’m a regular churchgoer, and I felt personally touched,” he said. “Tears came to my eyes on Monday night.”

“Of course, one can ask why billionaires did not give money before to less important organizations. But who knows if they didn’t?” he said.

“On the other hand, what really shocked me is Macron saying Notre Dame would be rebuilt within five years. It’s obvious he never held a trowel in his life.”

Left: Notre Dame cathedral is pictured after a ceremony at the Paris City Town Hall, in Paris, France on April 18, 2019. Michel Euler/Pool via Reuters