PARIS — Thousands of French yellow vest demonstrators were marching through Paris on Saturday as authorities enforced bans on protests in certain areas and displayed enhanced security measures to avoid a repeat of last week’s riots in the capital.

The crowd gathered peacefully Saturday at Denfert-Rochereau Square in southern Paris and then headed north. The protesters are expected to finish Saturday’s march in the tourist-heavy neighborhood of Montmartre around its signature monument, the hilltop Sacre-Coeur Cathedral.

French authorities have banned protests from the Champs-Elysees Avenue in Paris and the central neighborhoods of several other cities including Bordeaux, Toulouse, Marseille and Nice in the south, and Rouen in western France.

A 99 year old #GiletJaune takes to the streets against Macron.

The Champs-Elysees was almost empty Saturday except for a huge police presence. Scores of shops were looted and ransacked last weekend, and some were set on fire by protesters. Fear of more violence certainly kept tourists away, and police shut down the Champs-Elysees subway stations as a precaution.

In Nice, police dispersed a few hundred protesters who gathered on a central plaza. The city was placed under high security measures as Chinese President Xi Jinping was expected to stay overnight on Sunday as part of his state visit to France.

About 6,000 police officers were deployed in the capital on Saturday and two drones were helping to monitor the demonstrations. French authorities also deployed soldiers to protect sensitive sites, allowing police forces to focus on maintaining order during the protests. 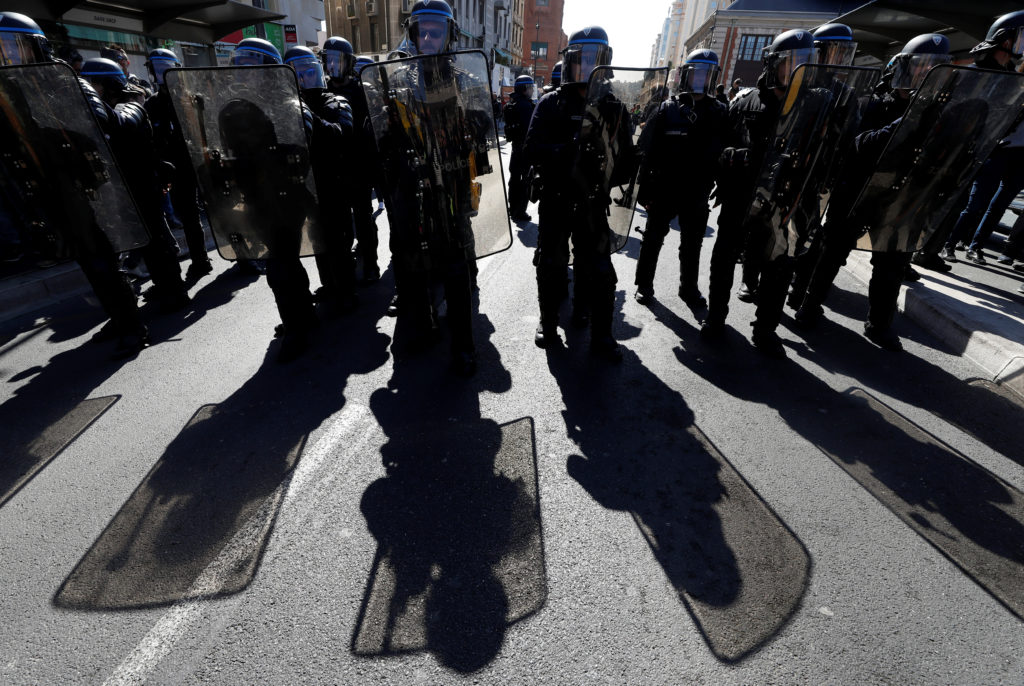 President Emmanuel Macron on Friday dismissed criticism from opposition leaders regarding the involvement of the military, saying they are not taking over police duties.

“Those trying to scare people, or to scare themselves, are wrong,” he said in Brussels.

“Since when do soldiers face a population? We are here in France. You would say that we are here in (North) Korea or in China. I never saw something like this,” she said.

Last week’s surge in violence came as support for the 4-month-old anti-government yellow vest movement has been dwindling, mostly as a reaction to the riots by some protesters.

The protests started in November to oppose fuel tax hikes but have expanded into a broader rejection of Macron’s economic policies, which protesters say favor businesses and the wealthy over ordinary French workers. Macron countered by dropping the fuel tax hike and holding months of discussions with the public on France’s stagnant wages, high taxes and high unemployment.

The yellow vest movement was named after the fluorescent garments that French motorists must carry in their vehicles for emergencies.

Milos Krivokapic contributed to this report.

Left: Protesters run away as tear gas is fired during 19th round of "yellow vests" protests in Nice, France, March 23, 2019. Photo by Eric Gaillard