ROME — Mario Draghi, the man largely credited with saving the euro currency, took the helm as Italy’s premier Saturday after assembling a government of economic experts and other technocrats along with career politicians from across the spectrum to guide the pandemic-devastated nation toward recovery.

Draghi and his 23 Cabinet ministers took their oaths of office at the Quirinal presidential palace. Italian President Sergio Mattarella had tasked the former European Central Bank president with trying to form a government up to managing the the health, economic and social crises of the coronavirus pandemic.

In deference to coronavirus precautions, all participants in the swearing-in ceremony were masked, and a palace aide provided each minister with a fresh pen to sign their oath. Draghi made no public comments during the first hours of his premiership, and his eyes showed no discernible emotion over his N95 mask.

Draghi’s most-quoted words so far have been those uttered in 2012 when the euro-zone risked collapsing in a crisis of confidence and he vowed the European Central Bank would do “whatever it takes” to rescue the euro.

The current head of the European Central Bank, Christine Lagarde, tweeted her congratulations. “I wish him all the best as he takes on the task ahead, leading the government in the best interests of all Italian citizens,” she said. 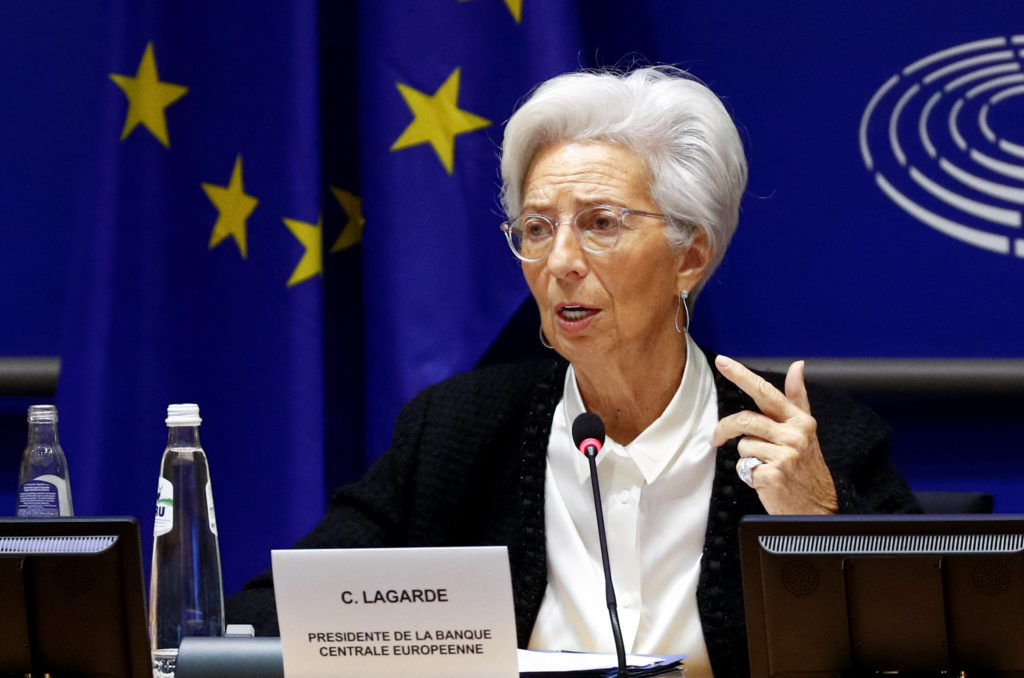 Also tweeting good wishes was the European Union’s top executive, Ursula von der Leyen, who called Draghi’s experience “an exceptional asset for Italy & Europe.” She said she was looking forward to working with Draghi “for our common recovery.”

Draghi, 73, an economist who also previously led Italy’s central bank, replaced now-former Premier Giuseppe Conte, whose government collapsed after a small party yanked support over the handling of the pandemic. Broad political backing for the new Cabinet will be crucial in the Italian Parliament, where Draghi next week must win mandatory confidence votes.

With pandemic lockdowns pummeling Italy’s long-stagnant economy, he chose for his economy minister a non-political appointee, Daniele Franco, an expert in public finances who has served in Italian central bank posts.

Eager to have some role in deciding how Italy will spend some 209 billion euros (about $250 billion) in European Union recovery funds, politicians from parties that have spent years demonizing each other set aside differences, at least for now, and agreed to join a Draghi government.

The prospect of funneling EU money into concrete projects to improve citizens’ lives practically overnight transformed the euroskepticism of Matteo Salvini, the right-wing League leader, into a publicly enthusiastic pro-Europe proponent of a Draghi government.

Salvini didn’t get a ministry himself, but three League stalwarts did, including longtime aide and lawmaker Giancarlo Giorgetti, who was put in charge of the economic development ministry. Italy urgently needs to bolster businesses knocked to the ground by the government’s anti-pandemic measures, which shuttered stores, shopping malls, restaurants and cafes for weeks.

With tourism accounting for some 13% of Italy’s gross domestic product, the pandemic obliterated a significant chunk of the economy. The new government will have a tourism Ministry from the previous culture ministry.

A League senator heads the new tourism post. Keeping the reins of the culture ministry is Dario Franceschini, a high-profile Democrat who revitalized Italy’s museums to attract many more visitors.

Italy’s health minister through the pandemic, Roberto Speranza, kept his post, the sole minister from a small left-wing party.

Ministry posts were handed out to four parties that were in Conte’s imploded coalition, including a small centrist party led by ex-Premier Matteo Renzi, whose defection triggered the political crisis ultimately resolved by Draghi’s arrival on the scene.

The biggest party in the Italian Parliament, the populist 5-Star Movement, has the most political posts in Draghi’s Cabinet, four.

Born as an anti-establishment movement, the Movement was already splintering after being the lead party in back-to-back Conte governments since 2018 — one right-leaning and the other left-leaning. Its decision to join a Draghi government threatened to widen the fractures in the Movement, with roots in distrust of Brussels.

Clinching populists’ support for Draghi was the former central banker’s creation of a ministry of ecological transition. The new post will be headed by a physicist and technology champion, Roberto Cingolani.

Back in government after a decade with three ministry posts is the center-right Forza Italia party, led by Silvio Berlusconi, the former premier who bills himself as a staunch champion of Europe.

Ex-Premier Conte, a mediation specialist lawyer who heads no party, is riding high in opinion polls from his 2 1/2 years in office. Many observers consider him ripe to form his own party ahead of the next general election, which is scheduled for 2023 but could come sooner given the political tensions among existing parties.

As Conte strode through the courtyard of Chigi Palace on his way out, career employees of the premier’s office, from bureaucrats to ushers, leaned out of windows to warmly applaud.