SAN SALVADOR, El Salvador (AP) — A man and his young daughter who drowned trying to cross into Texas were laid to their final rest Monday, a week after a heartbreaking image of their bodies floating in the Rio Grande circled the globe.

About 200 relatives and friends followed a hearse bearing the bodies of Óscar Martínez and his 23-month-old daughter Valeria inside La Bermeja municipal cemetery in southern San Salvador. The ceremony was private, and journalists were not allowed access.

Many wore black and wept. They carried flowers and green palms, and some held signs bearing the logo of the Alianza soccer team favored by Óscar Martínez, who belonged to a group that supports the club.

“For those who cheer you on from heaven,” one read.

“I knew them. They are good people, and I can’t believe they died this way,” said Berta Padilla, who arrived earlier along with about 30 others on a bus from Altavista, the working-class city the Martínezes called home before they left in early April, headed for the United States.

“We came from Altavista to be with Óscar’s family,” Padilla added. “We are with them in their pain.” 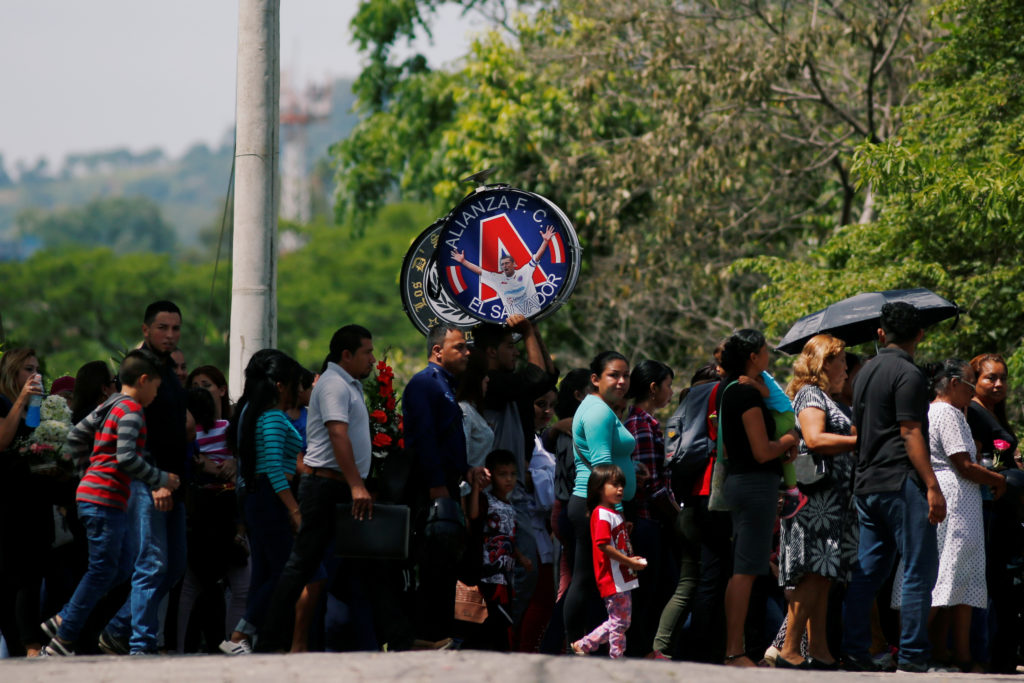 Family and friends participate in the funeral of Oscar Alberto Martinez Ramirez and his daughter Valeria, migrants who drowned in the Rio Grande river during their journey to the U.S., at La Bermeja cemetery in San Salvador, El Salvador July 1, 2019. Photo by Jose Cabezas/Reuters

Tania Vanessa Ávalos, their wife and mother, returned to El Salvador on Friday ahead of their remains.

A municipal police officer said their graves were in a section of the cemetery named after Saint Óscar Romero, the San Salvador archbishop who devoted himself to helping the poor and was assassinated in 1980. Romero, who was canonized last year, is buried in the crypt of the city’s cathedral.

After the burial, relatives stayed behind at the gravesite to say a last goodbye, said family friend Reyna Moran.

“This is very painful, most of all because of the baby. … They went in search of a better future, but everything came to an end in the river,” Moran said.

A collection of floral arrangements adorned the grave, including one from El Salvador’s president and first lady. Interior Minister Mario Durán was among those who attended. 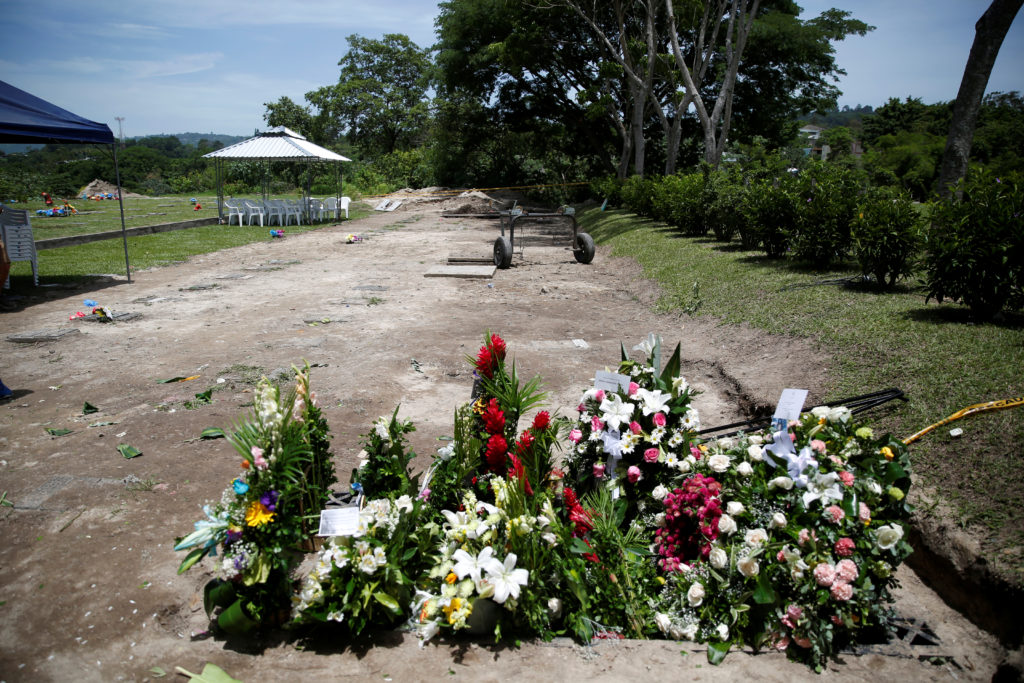 Flowers are seen where Oscar Alberto Martinez Ramirez and his daughter Valeria, migrants who drowned in Rio Grande river during their journey to the U.S., where buried at La Bermeja cemetery in San Salvador, El Salvador July 1, 2019. Photo by Jose Cabezas/Reuters

The photographs of Martínez, 25, and Valeria, lying face-down along the riverbank, the tiny girl tucked inside his black shirt and her arm draped over his neck, prompted a global outpouring of emotion. They underscored the perils faced by migrants and asylum-seekers trying to reach the United States.

“We are dismayed, shocked, everyone is in pain,” said Altavista Mayor Victor Manuel Rivera. “This family has lost an angel of just under 2 years, and seeing that heartbreaking image, the photo, is shocking.”

President Nayib Bukele said late Sunday that the drownings were “a great tragedy” and that there’s blame to be shared among governments.

U.S. policies designed to deter Central Americans and others from coming have stalled thousands on the Mexico side of the border as they wait to request asylum in the United States. Meanwhile, Mexico is stepping up immigration enforcement under intense pressure from the Trump administration.

“We are dismayed, shocked, everyone is in pain.”

And Bukele, who took office a month ago, said his own country shares responsibility.

“We can speak blame to any other country, but what about our blame?” Bukele said in lengthy remarks, much of them delivered in English. “I mean, what country did they flee? Did they (flee) the United States? They fled El Salvador. They fled our country. It is our fault.”

Many of those trying to reach the U.S. border in recent months have said they were fleeing grinding poverty, a lack of opportunity and violence in the gang-dominated Northern Triangle region of El Salvador, Honduras and Guatemala, or a combination of these factors.

Martínez’s mother said last week that the family had hoped to live and work in the United States for a few years, saving enough money to return and build a home of their own.

“These are situations that make visible the problem of migration, something that happens daily,” said Mario Vega, pastor of the Elim Protestant church, one of El Salvador’s largest. “Yesterday it became known that another Salvadoran died in a detention center in Texas, and this is something that happens every day.”

Vega criticized U.S. policies on migration and expressed hope that all countries would heed a U.N. call to respect migrants’ human rights.

“May God will that this tragedy sensitize people,” he said.

Left: Family and friends participate in the funeral of Oscar Alberto Martinez Ramirez and his daughter Valeria, migrants who drowned in the Rio Grande river during their journey to the U.S., at La Bermeja cemetery in San Salvador, El Salvador July 1, 2019. Photo by Jose Cabezas/Reuters