QUITO, Ecuador — Indigenous leaders of protests that have paralyzed Ecuador’s economy for nearly a week said Saturday they were willing to negotiate with President Lenín Moreno, signaling a possible exit from the crisis.

The Confederation of Indigenous Nations of Ecuador said on its Twitter account that after internal discussion “we have decided to participate in direct dialogue” with Moreno.

Minutes after that tweet, Leonidas Iza, a Quechua leader from mountainous Cotopaxi province, told Ecuavisa television that “we have asked for minimal conditions for dialogue,” including what he called an end to government violence against protesters.

Previously, indigenous protesters had refused to negotiate until Moreno restored fuel subsidies whose cancelations prompted days of protests around Ecuador.

On Friday, the president had called for the sides to sit down immediately.

“The country must recover its calm,” he said on national television. “Let’s sit down and talk.” 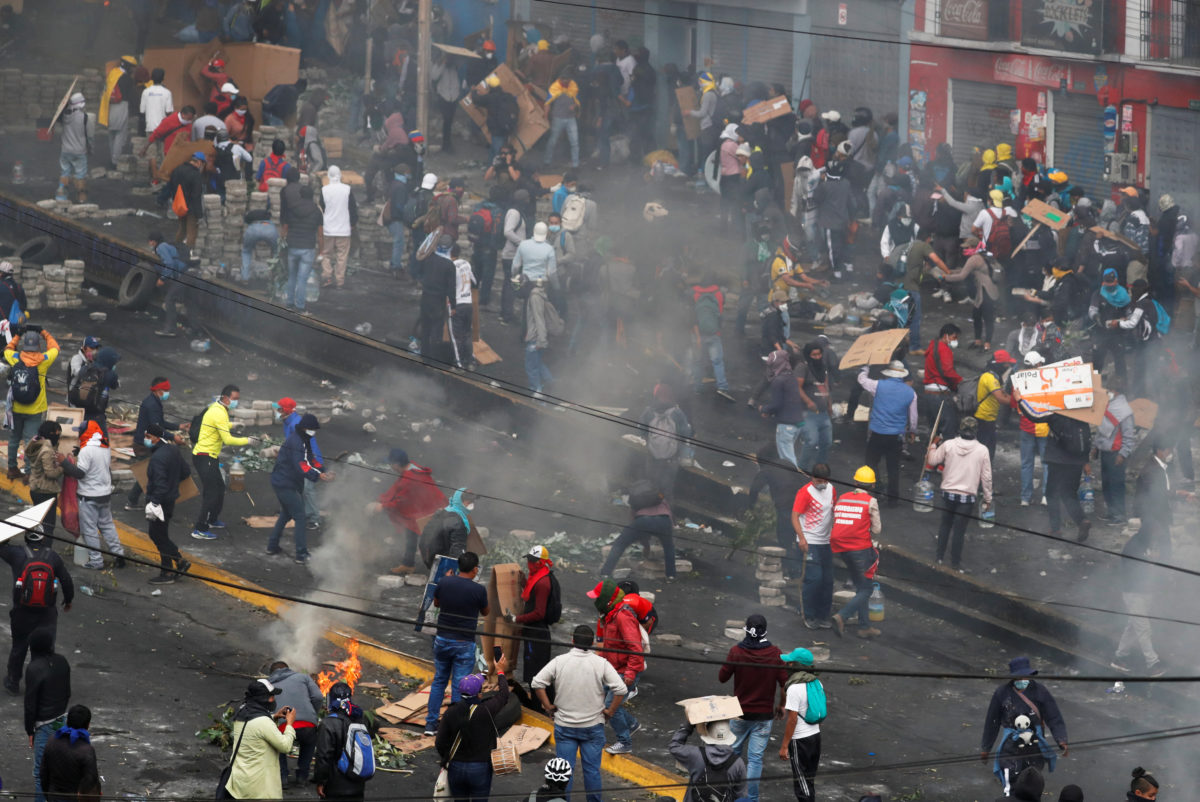 The softening of the indigenous leadership’s position in response to Moreno came as street blockades and sporadic violence spread around the capital city, Quito.

Groups of hooded young men used rocks and burning tires to block streets in neighborhoods so far untouched by the unrest. Some drivers, pedestrians and owners of small businesses reported being threatened and robbed. The indigenous leaders have distanced themselves from the violent gangs, calling them instigators unconnected to the native groups’ cause.

Several masked men broke in and appeared to set fires Saturday inside the national auditor’s office, across from the street from the park and cultural complex that have been the epicenter of the protests. Black smoke could be seen billowing from the building.

An indigenous leader and four other people have died in clashes with authorities, according to the public defender’s office. The president’s office has reported two deaths. Hundreds of protesters have been injured and hundreds more briefly detained.

Ecuador, a former OPEC member, was left deeply in debt by a decade of high-spending governance and the oil price drop. Faced with a $64 billion debt and a $10 billion annual deficit, Moreno is raising taxes, liberalizing labor laws and cutting public spending in order to win more than $4 billion in emergency financing from the International Monetary Fund.

As part of that plan, Moreno eliminated a subsidy on the price of fuel on Oct. 2, driving the most popular variety of gasoline from $1.85 to $2.39 a gallon and diesel from $1.03 to $2.30. Panic and speculation sent prices soaring, with costs of some products — papayas, rural bus fares — doubling or more. 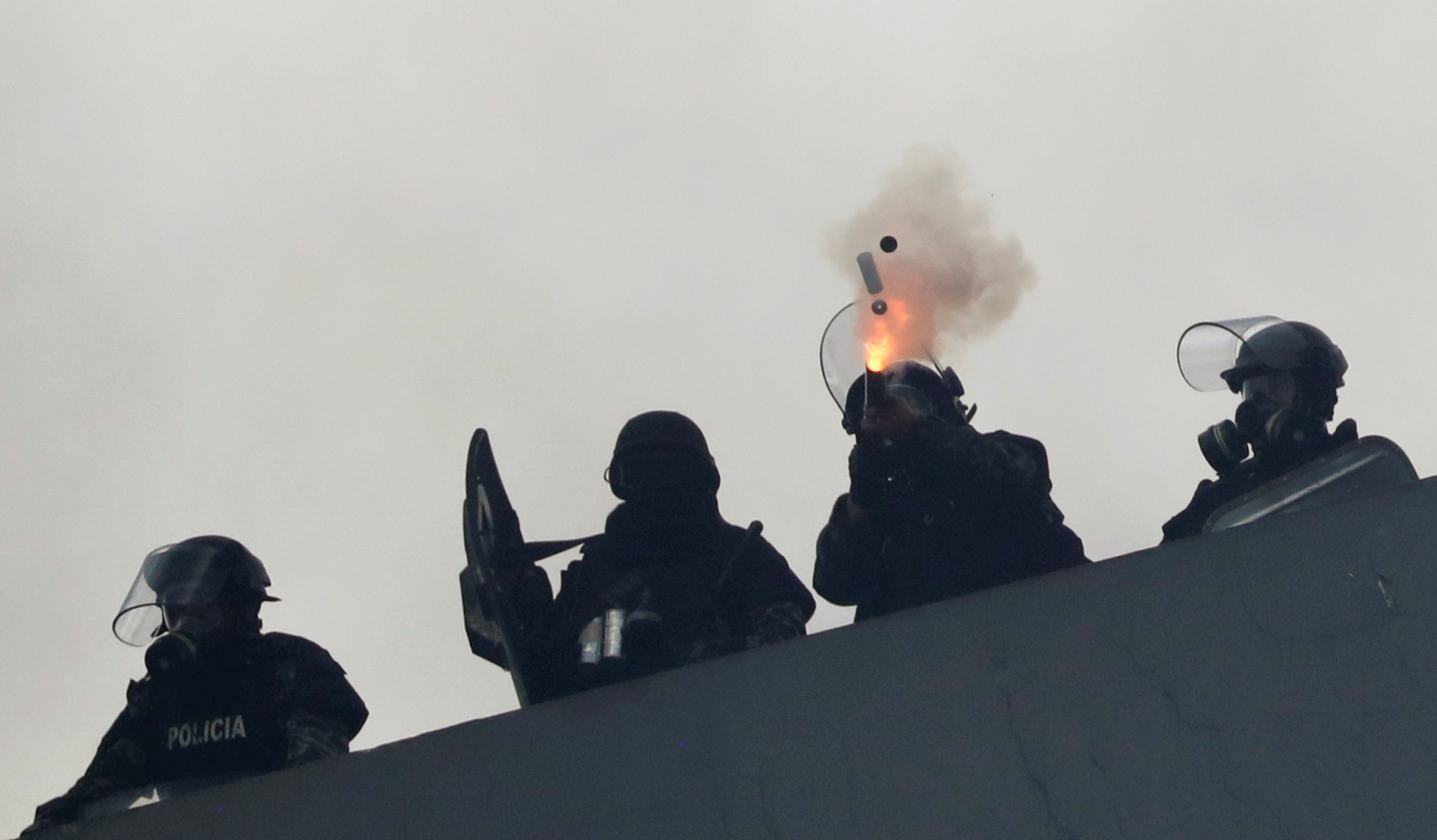 Ecuador’s indigenous people, wracked by poverty and underserved by government programs, were infuriated. Over the last week, thousands of Shuar, Saraguro, Quechua and other indigenous people streamed into Quito from deep in the Amazon rainforest and high in the towns and villages of the Ecuadorian Andes. They have set up camp in the Casa de la Cultura, the neighboring park known as El Arbolito and three universities, supported by thousands of protesters from Quito and surrounding areas.

At least once a day, young men with sticks and rocks surge toward the legislature and try to take it over, as they’ve done at least once this week, before being driven out with tear gas.

The protests have halted activity in much of the southern end of the capital and prompted Moreno to temporarily move the seat of government to the Pacific port city of Guayaquil. Indigenous protesters also launched attacks on Amazon oil wells that have paralyzed production, the country’s main export, by cutting off generators and forcing essential staff to leave.

Despite the dire situation, Moreno has said he cannot restore the fuel subsidies. The country is broke and backing down to protesters would be a defeat for the president’s effort to undo the policies of his predecessor and former mentor, Rafael Correa.

Moreno has received statements of support from the U.S., the Organization of American States and a group of Latin American countries that emphasize he took office as Ecuador’s constitutionally elected president in 2017.

Left: A demonstrator holds a burning tire behind a makeshift barricade during a protest against Ecuador's President Lenin Moreno's austerity measures in Quito, Ecuador October 12, 2019. Photo by Carlos Garcia Rawlins/Reuters.