Egyptians vote on changes that would extend el-Sissi’s rule

CAIRO — Egyptians went to the polls Saturday for the first of three days of voting on constitutional amendments that would allow President Abdel-Fattah el-Sissi to stay in power until 2030 and broaden the military’s role.

Critics have blasted the proposed changes as another major step toward an authoritarian government perhaps even more severe than that of former President Hosni Mubarak, whose nearly three decades of autocratic rule was ended by a popular uprising in 2011.

The nationwide referendum came amid an unprecedented crackdown on dissent in recent years. El-Sissi’s government has arrested thousands of people, most of them Islamists but also prominent secular activists, and rolled back freedoms won eight years ago.

Prominent Egyptian newspaper columnist Abdullah Al Sennawy decried the amendments as a threat to the country’s stability. He said they would increase the government’s grip on power and erode the balance between authorities currently in place.

“Changing the constitution reflects the weakness of the regime. It is a sign that the regime is close to its end, such as what happened in Sudan and Algeria,” he said.

Voting will stretch over a period of three days to allow maximum turnout, which the government is hoping to lend the referendum legitimacy. 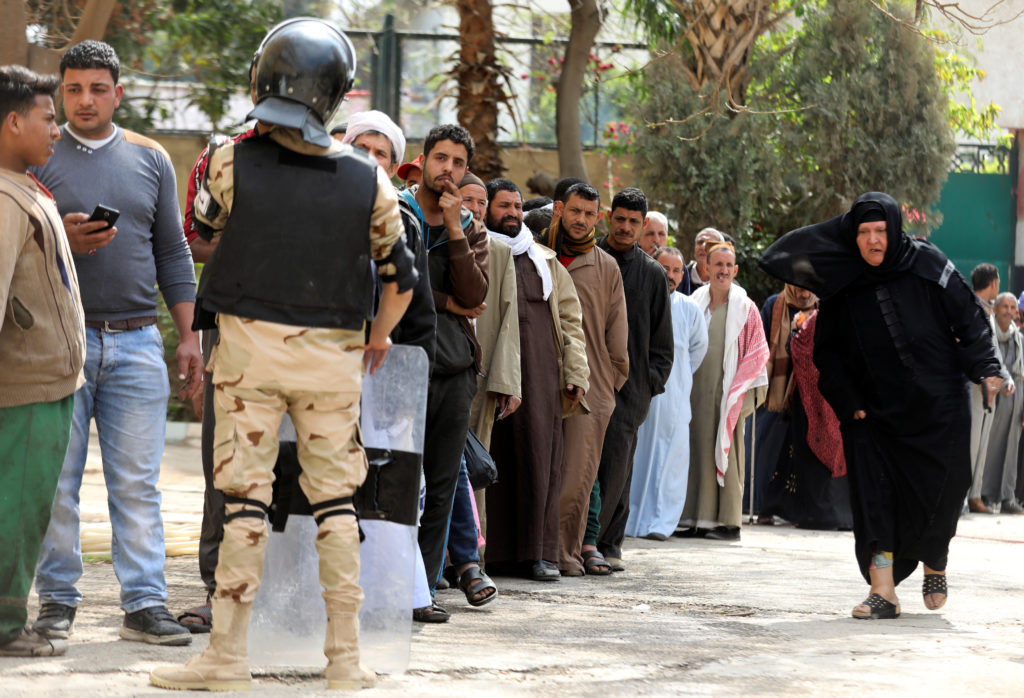 People stand in line to cast their vote during the referendum on draft constitutional amendments, at a polling station in Cairo, Egypt April 20, 2019. Photo By Mohamed Abd El Ghany/Reuters

Mahmoud el-Sherif, spokesman of the National Elections Authority, said more than 61 million people are eligible to vote. Results were expected within a week, el-Sherif said in a news conference.

Outside a polling center near the Giza Pyramids, around two dozen people, mostly elderly women, lined up waiting to cast their votes. Heavy police and army security was reported at polling stations throughout the country.

Haja Khadija, a 63-year-old housewife, said she came for the “security and stability” of the country. “We love el-Sissi. He did lots of things. He raised our pensions.”

Casting his ballot on Saturday, Prime Minister Mustafa Madbouly urged voters to turn out in high numbers. He said that voting will reflect “the atmosphere of stability and democracy that we are witnessing now.”

State-run TV said el-Sissi voted in Cairo’s Heliopolis district, near the presidential palace. El-Sissi, who has repeatedly said he won’t stay in office any longer than the people want him to, hasn’t commented on the amendments.

Opposition voices have largely been shut out amid the rush to hold the referendum. Pro-government media have led a campaign for weeks calling a “Yes” vote a patriotic duty.

Since early April, the Egyptian capital has been awash with large posters and banners encouraging people to vote in favor of the changes. Most of the posters were apparently funded by pro-government parties, businessmen and lawmakers.

Parliament, packed with el-Sissi supporters, overwhelmingly approved the amendments on Tuesday, with only 22 no votes and one abstention from 554 lawmakers in attendance. The national electoral commission announced the following day that voting would begin on Saturday.

The proposed changes are seen by critics as another step toward authoritarianism. The referendum comes eight years after a pro-democracy uprising ended autocrat Hosni Mubarak’s three-decade rule, and nearly six years after el-Sissi led a popular military overthrow of the country’s first freely elected but divisive Islamist president, Mohammed Morsi.

Two international advocacy groups — Human Rights Watch and the International Commission of Jurists — on Saturday urged the Egyptian government to withdraw the amendments.

“Egypt’s autocracy is shifting into overdrive to re-establish the ‘President-for-Life’ model, beloved by dictators in the region and despised by their citizens,” said Michael Page, deputy Middle East and North Africa director at Human Rights Watch. “But it’s a model that recent experience in Egypt and neighboring countries has demonstrated is not built to last.”

The Civil Democratic Movement, a coalition of liberal and left-leaning parties, urged people to participate in the referendum by voting “No.”

The coalition said it used social media to spread its message, noting that it was banned from hanging banners in the streets to call on voters to reject the amendments.

Novelist Omar Knawy voted “No” in the referendum. He said he opposes most of the changes, especially those that would enable el-Sissi to stay in power beyond his current second four-year term. He also opposes articles that declare the military the “guardian and protector” of the Egyptian state, democracy and the constitution.

“The article related to the military gives it the right to interfere (in politics) at any time, and I am against such article,” he told The Associated Press.

El-Sissi was elected president in 2014, and re-elected last year after all potentially serious challengers were either jailed or pressured to exit the race.

In the last three years, over 15,000 civilians, including children, have been referred to military prosecution in Egypt, according to Human Rights Watch.

The amendments also introduce one or more vice presidents, revive the senate and enshrine a 25% quota for women in parliament’s lower, legislative chamber. All three had been dropped from Egypt’s constitution after the 2011 revolution.