“Here the people are celebrating a lot, it’s the first time that the top prize for the Christmas lottery has fallen here,” Luis Soriano, owner of a bar that sold some top-prize tickets in the eastern town of Ontinyent, told the Europa Press news agency.

Other lotteries have bigger individual top prizes but El Gordo, held each Dec. 22, is ranked as the world’s biggest in terms of total prize money.

“Where are those who said we were jinxed, after we have brought so much good luck?”

Multiple people picked the top winning number across Spain, spreading the 680 million euros ($773 million) distributed for it to 46 of the country’s 50 provinces.

“Where are those who said we were jinxed, after we have brought so much good luck?” said Jose Gomez, the manager of a lottery office in Cuenca, which also sold tickets for the biggest prize.

Individuals or groups of friends or colleagues buy the El Gordo lottery tickets, which cost 20 euros ($23) each, months in advance. 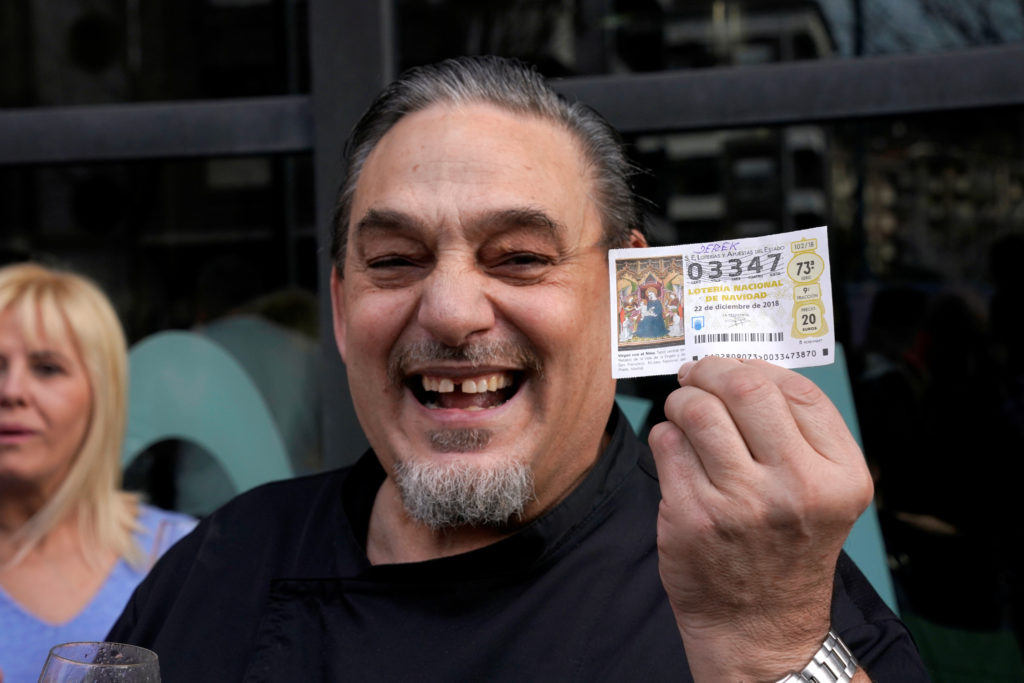 Bar owner Javier Zarandona holds up his first-prize winning ticket of Spain’s Christmas lottery, “El Gordo” (The Fat One), in the Basque town of Guernica, Spain, on December 22, 2018. Photo by Vincent West/Reuters

Following the lottery draw has become a winter holiday tradition in Spain, with people glued to television sets, radios or the internet, where newspaper websites give a running commentary.

Children from Madrid’s San Ildefonso school called out the lottery prizes Saturday on a nationally televised draw at Madrid’s Teatro Real opera house. The tiny wooden balls corresponding to the top prize rolled down chutes from two huge round cages and were called out by young girls three hours into the gala.

The focus then shifted to jubilant images of the winners, who were popping open bottles of cava and celebrating in lottery offices, bars or in the street.

Spain established its national lottery as a charity in 1763, during the reign of King Carlos III. Its objective later became to shore up state coffers.

Left: Schoolchildren hold up the winning number of the biggest prize of Spain's Christmas Lottery "El Gordo" (The Fat One) in Madrid, Spain, on December 22, 2018. Photo by Javier Barbancho/Reuters