El Salvador tries to rein in crime with community policing

SANTA ANA, El Salvador — El Salvador has a population of just more than 6 million, but almost 16,000 children from that country have arrived at the United States border from last October and the end of August.

While that migration is attributed to multiple factors, it has directed attention to the country’s struggle with organized crime. Now that nation’s new president is looking to community policing as a strategy to tackle insecurity.

On a recent day, community police officers Daniel Ivan Campos and Raul Alonso Garcia patrolled a neighborhood on the outskirts of the city of Santa Ana on foot.

“We try to walk our whole beat,” Campos said in Spanish. He said it helps them see who is around and prevent crime.

This area is semi-rural, with dirt roads.

The two officers both wear dark uniforms. Garcia, 47, is the veteran of the pair. He has 20 years of experience in the police department, but only two years as a “community police officer.” Campos is 26 and began this assignment just six months ago.

We stop in front of a cement wall covered in graffiti.

“We are going to erase this,” Garcia said.

The graffiti belongs to a gang known as La Mirada Loca. It loosely translates as “The Crazy Stare.” 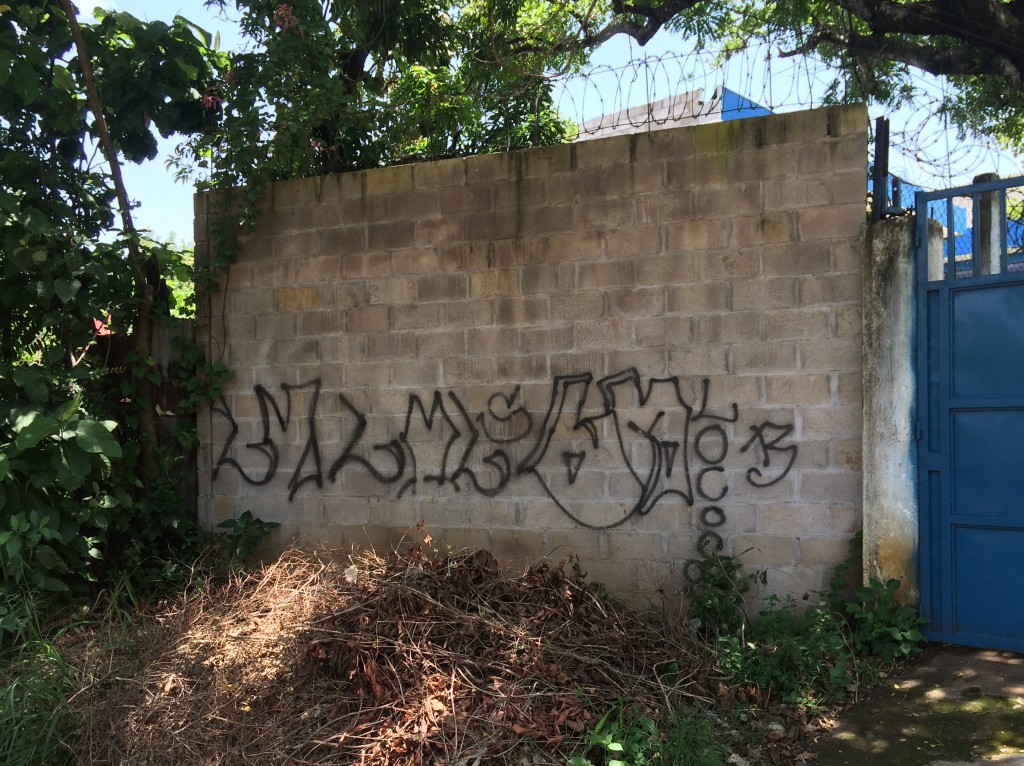 A wall with gang graffiti in the outskirts of Santa Ana. Photo by Jude Joffe-Block/Fronteras Desk

Local residents asked Campos and Garcia to take care of this kind of graffiti. This neighborhood doesn’t have too many gang problems and residents are anxious to keep it that way.

The pair has already painted over a number of graffiti-plagued walls, and this is the last one they still have to paint.

Campos and Garcia said they try to respond to community members’ concerns. Sometimes that means tasks that are beyond the realm of traditional police work — lately the officers have been digging a ditch to prevent flooding.

There’s a benefit, though: it earns trust.

As we walk, Garcia and Campos spot a man carrying a 12-gauge. They demand to see his paperwork to make sure it is a legal weapon.

Garcia looks over the papers and says it checks out. The man with a gun is Mario Martinez. He is a security guard for a company that drives around selling cell phone credit.

Martinez said he is glad the police stopped him.

“It’s good,” Martinez said. “This way they know who is legal and who isn’t.”

In the last couple years, Garcia and Campos’ police department received training and assistance from the U.S. State Department.

“It is all part of this philosophy of prevention,” said James Rose, the State Department’s regional gang adviser, who works out of the U.S. Embassy in San Salvador. “To achieve prevention you have to have a proactive attitude from the police.” 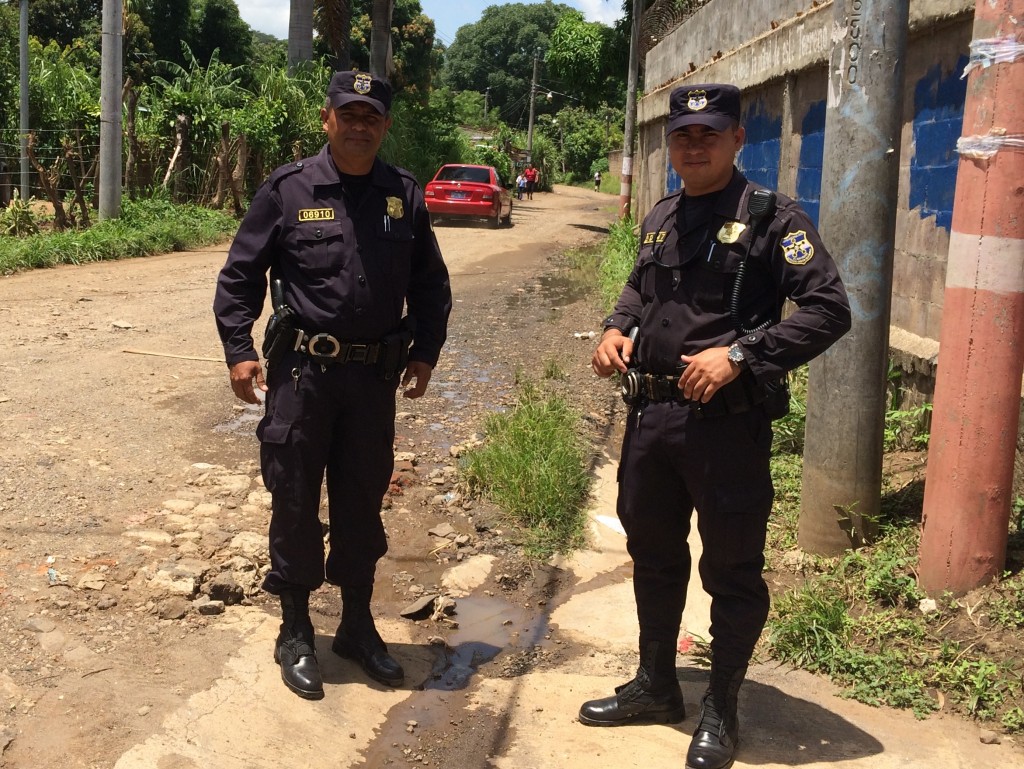 Raul Garcia and Daniel Campos are community police officers in the city of Santa Ana. Photo by Jude Joffe-Block/Fronteras Desk

The model is a contrast to the mano dura — or iron-fist policies — that Salvadoran police used in the past.

Rose said right after the U.S. launched its program with the Santa Ana precinct in 2011, the agency used the new techniques to prevent future gang homicides. By analyzing the data of past homicides, Santa Ana officers found a pattern.

“One clique was responsible for over 60 percent of [gang] homicides,” Rose said. “So then they knew how to create a tactic to lower the homicide rates: they went after that clique.”

Rose said that under mano dura, police likely would have sent out as many officers as possible and rounded up every known gang member for minor offenses, only to see them released quickly due to a lack of evidence.

The U.S. isn’t alone in promoting these community policing models. Some local leaders have gone in the same direction. And this summer the new president, Salvador Sánchez Cerén, announced a plan to expand community policing nationally.

At the end of September, Sánchez Cerén also announced a plan to create a council with representatives from the Catholic Church, the private sector, and government officials to come up with an action plan to reduce crime.

In 2012, during the former president’s administration, a secretive truce was brokered between the two biggest gangs. But crime rates have risen since then, and it is widely believed that the truce is no longer in effect.

Back on patrol with Garcia and Campos, it’s evident that community policing is not always friendly.

A man in a white shirt and sagging jeans comes from around the corner. Within moments Campos and Garcia have stopped him and are patting him down.

Garcia grills him about whether he is in La Mirada Loca, and what his alias is.

A Salvadoran law allows police to stop and frisk anyone they suspect of being in a gang. These officers have the man’s shirt pulled up, and search his back and torso for gang tattoos. 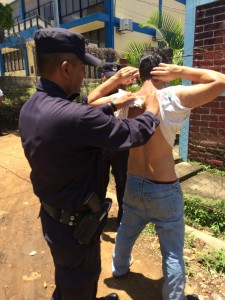 It is legal for police in El Salvador to stop and frisk people they suspect of being in a gang. Photo by Jude Joffe-Block/Fronteras Desk

The man introduces himself as Alexander Herrera Toledo. He has been drinking. He claims he is no longer an active gang member.

“It’s been six years since I retired from the gang,” Herrera Toledo said.

He said he became a Christian and dropped out.

Herrera Toledo doesn’t have any weapons or drugs on him, just a flask and some video games. The officers let him go, though they didn’t buy his story.

“They always say they are retired,” Garcia said. “But it is a lie.”

Garcia insisted anyone who actually leaves the gang would be killed. He said he and Campos had previously identified Herrera Toledo as a gang member, which is why they stopped and frisked him.

Medina believes these police are doing a good job.

“There wasn’t trust before, but now I think there is,” Medina said. “When criminals see the police around they get a little scared and leave. It’s been a big help.”

Still, Medina isn’t sure community policing will be enough to save El Salvador. Her daughter lived in another town, which unlike this one is controlled by gangs. That daughter fled to the U.S. with one son when her older son was murdered.

“I think something stronger is needed,” Medina said. “The community police do everything they can. But they need stronger laws.”

I ask her what that would be. Medina shrugs.

“I don’t know!” Medina said. “Put the gang members away somewhere where they will be calm and will leave everyone else alone?”

It’s what many want here. But of course, it’s not that simple.