STOCKHOLM — An exit poll indicated that Sweden’s first general election since the Scandinavian country accepted a significant number of asylum-seekers was likely to have the center-left party governing now as its winner, but an anti-immigrant party with white supremacist roots placing second in balloting Sunday.

Public broadcaster SVT said immediately after polls closed that its exit poll indicated the ruling Social Democrats would remain Sweden’s largest party, but making its worst-ever showing with 26.2 percent of the vote.

The exit poll projected the far-right Sweden Democrats would get 19.2 percent of Sunday’s vote after Swedes had the opportunity to make their views on immigration known at polling places.

The Swedish government in 2015 allowed 163,000 migrants into the country with a population of 10 million. The number was far lower than the asylum-seekers Germany accepted that year, but the highest per capita of any European nation.

Ahead of the election, promising prospects for the Sweden Democrats had many Swedes worried about an erosion of the humanitarian values that have long been a foundation of their country’s identity.

“This election is a referendum about our welfare,” Prime Minister Stefan Lofven said. “It’s also about decency, about a decent democracy … and not letting the Sweden Democrats, an extremist party, a racist party, get any influence in the government.”

About 7.5 million voters were eligible to choose the next members of the 349-seat Riksdag, or parliament. About 6,300 candidates sought the four-year terms. It was unlikely any single party would secure a majority of 175 seats.

The latest opinion poll conducted by pollster Novus for public broadcaster SVT suggested Friday that Lofven’s ruling Social Democrats would lose a substantial number of seats, but emerge with about one-fourth of the vote — the most support predicted for any party. The party has dominated Swedish politics in the post-World War II era. 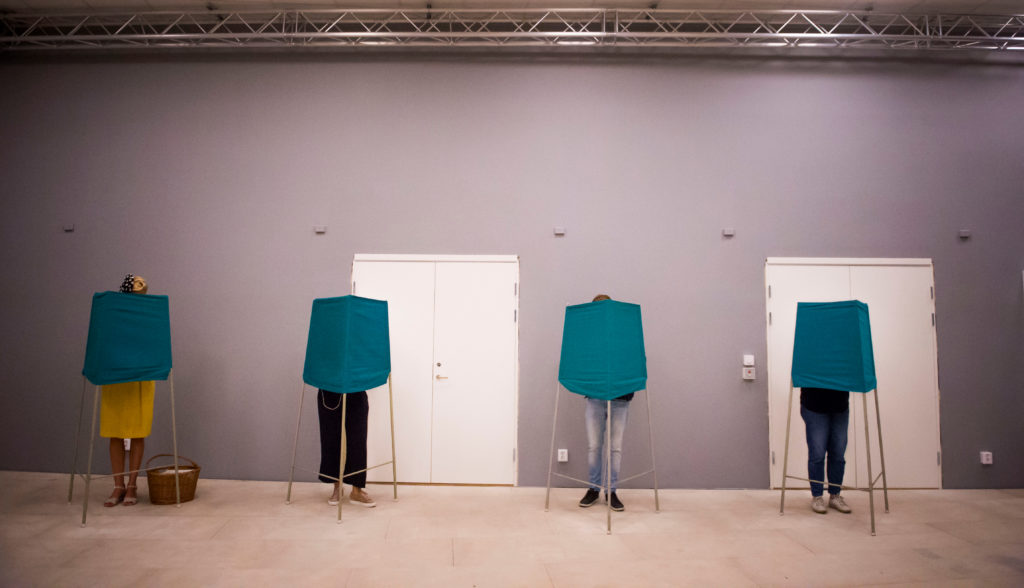 The Sweden Democrats — led by Jimmie Akesson — has worked to soften its neo-Nazi image while helping to break down longstanding taboos on what Swedes could say openly about immigration and integration without being shunned as racists.

During a heated debate among party leaders Friday, Akesson caused a stir by blaming migrants for the difficulties they often have in finding employment and not adjusting to Sweden.

The broadcaster that aired the televised debate, SVT, afterward called his remarks degrading and against the democratic mandate of public broadcasting.

Akesson responded that state television shouldn’t take sides, and later announced that he wouldn’t take part in any of SVT’s election programs Sunday.

At the party’s rally on Saturday, he strongly criticized Lofven’s government for “prioritizing” the cause of immigrants over the needs of citizens.

“This government we have had now . they have prioritised, during these four years, asylum-seekers,” Akesson said, giving an exhaustive list of things he says the government has failed to do for Swedish society because of migrants.

Jari Tanner reported from Helsinki. Jeff Schaeffer and Philipp Jenne in Stockholm contributed to this report.

Left: A ballot envelope is put in ballot box at a polling station in Tomelilla, Sweden September 9, 2018. Johan Nilsson/TT News Agency via Reuters