Erdogan in Tunisia for surprise visit to discuss Libya

ISTANBUL — Turkey’s president has met with Tunisia’s president in a surprise visit to Tunis to discuss the conflict in neighboring Libya.

Turkish President Recep Tayyip Erdogan told reporters Wednesday he and President Kais Saied discussed steps for a ceasefire in Libya and a return to political dialogue.

The fighting in Libya has threatened to plunge the North African country into violence rivaling the 2011 conflict that ousted and killed longtime dictator Moammar Gadhafi.

The Tunisia visit follows two agreements Erdogan struck with the Libyan government that controls the capital, Tripoli, and some of the country’s west. The maritime and military agreements were condemned by the rival Libyan government in the east and the forces loyal to commander Khalifa Hifter.

Erdogan reiterated that Turkey would evaluate sending soldiers to Libya if there is an invitation from Tripoli, where the United Nations-supported but weak administration of Prime Minister Fayez Sarraj is based. The military agreement signed into law last week allows Turkey to dispatch military experts and personnel, along with weapons, despite a U.N. arms embargo that has been violated by other international actors. 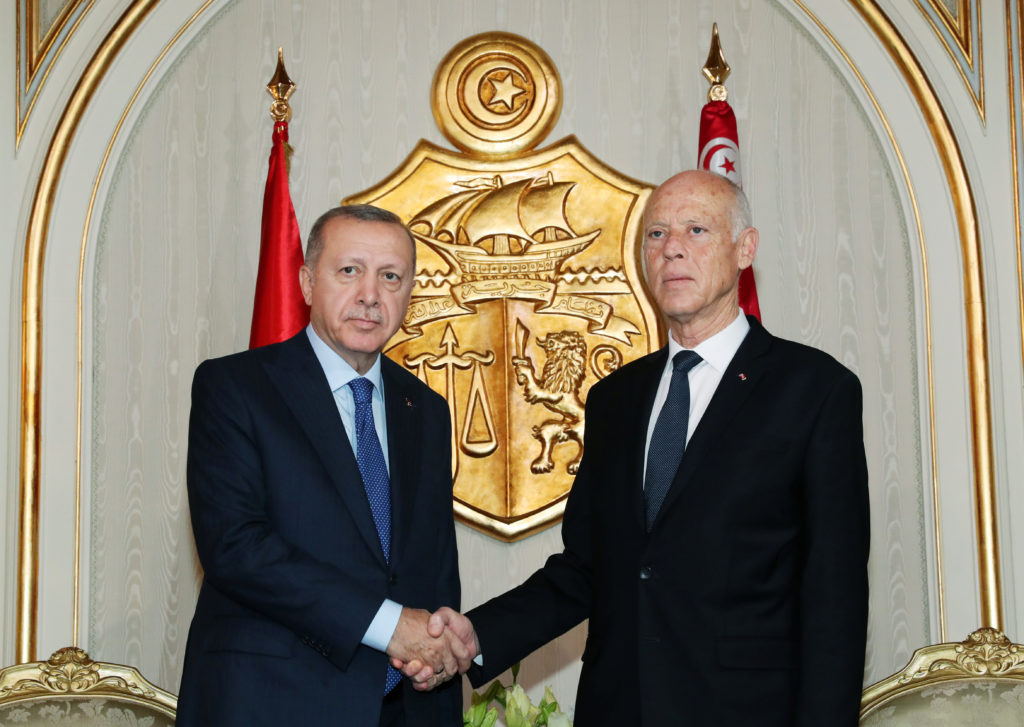 The maritime agreement that could give Turkey access to a contested economic zone across the eastern Mediterranean Sea has been condemned by Greece, Cyprus and Egypt as well as the rival Libyan government.

Saied, whose country shares a long border of more than 400 kilometers (around 250 miles) with Libya, said that the Turkish-Libyan agreement delimiting the maritime borders between the two countries, “does not concern Tunisia,” adding that it’s a Turkish-Libyan issue.

Besides Turkey, the Tripoli-based government is backed by Italy and Qatar. The eastern government is supported by France, Russia, Jordan, the United Arab Emirates and other key Arab countries.

Erdogan was accompanied by the Turkish defense minister, foreign minister and intelligence chief, among others.

The two leaders also discussed bilateral issues. Saied said that the two sides had discussed “major cooperation projects,” including the construction of a children’s hospital in Tunisia, and the rebalancing of trade between the two, which have a large deficit at the expense of Tunisia.