The failed coup in the Amhara region was led by a high-ranking military officer and others within the military on Saturday, said Prime Minister Abiy Ahmed, who made an address on the state broadcaster, wearing military fatigues, early Sunday.

In a related development, the head of Ethiopia’s military was shot dead in the capital also on Saturday, not long after the attack in Amhara.

In Amhara, soldiers attacked a building in which a meeting of regional officials was taking place, Nigussu Tilahun, spokesman for the prime minister, told a news conference Sunday. The regional president and at least two other officials were among the victims of that attack, he said.

The violent attack in Bahir Dar, capital of Amhara, was linked to the subsequent assassination of army chief Gen. Seare Mekonnen, who was shot dead by a bodyguard at his residence in Addis Ababa. A retired army general visiting the army chief at the time was also killed in the same attack, said the spokesman.

“There is a link between the two attacks,” Nigussu said. 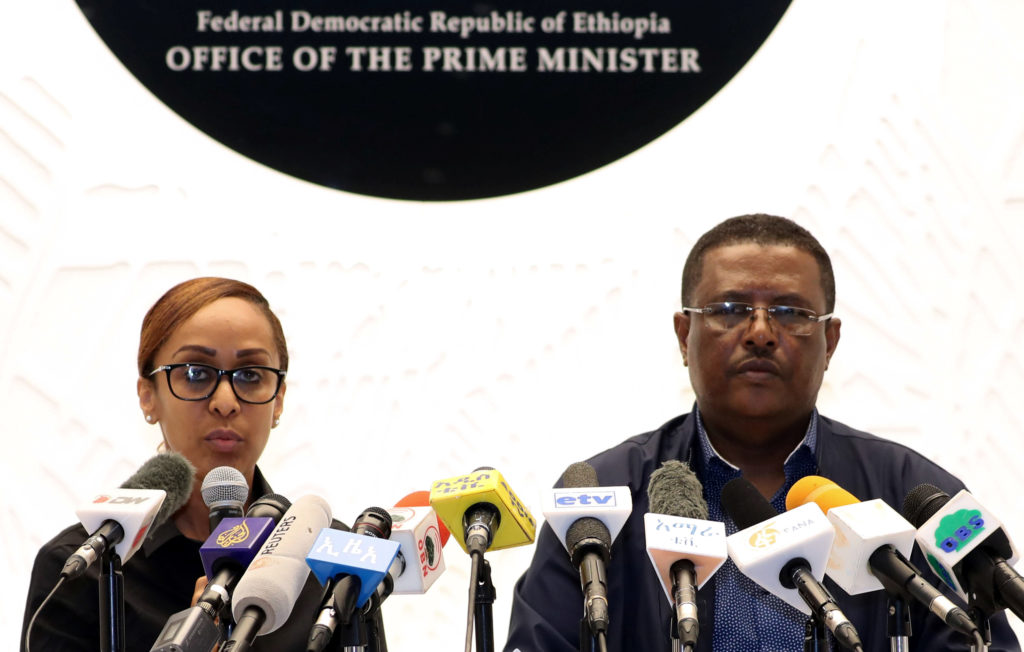 Nigussu Tilahun, Press Secretary at the office of the Ethiopian Prime Minister, and his deputy Billene Seyoum address a news conference on the attempted coup in Addis Ababa, Ethiopia June 23, 2019. Photo By Tiksa Negeri/Reuters

The attack in Bahir Dar was allegedly led by a renegade brigadier who had recently been pardoned by Ethiopia’s prime minister after being jailed for some offenses. Most of the perpetrators of the attack in Bahir Dar have been apprehended and others are being hunted down, said the spokesman.

The U.S. Embassy reported gunfire in the capital Saturday and urged people to be careful.

In Bahir Dar residents told The Associated Press they could still hear gunshots late Saturday. Ethiopia’s internet appeared to be shut down on Sunday.

The attempted coup in Amhara is the latest challenge to Abiy, who was elected last year as a reform-minded young leader.

Abiy has captured the imagination of many with his political and economic reforms, including the surprise acceptance of a peace agreement with bitter rival Eritrea, the opening of major state-owned sectors to private investment and the release of thousands of prisoners including opposition figures once sentenced to death.

Along the way he has faced some challenges. In June 2018, only months in office, an attempt to hurl a grenade at Abiy caused a deadly explosion at a massive rally in support of the sweeping changes in Ethiopia. Nine police officials were arrested over that incident, state media reported.

In October rebellious Ethiopian soldiers protested over pay, causing a security incident in the capital. Ethiopia’s army is one of the largest in Africa.

The country is a key regional security ally for the United States and others in the restive Horn of Africa region.