ZAPORIZHZHIA, Ukraine (AP) — A long-awaited effort to evacuate people from a steel plant in the Ukrainian city of Mariupol was underway Sunday, the United Nations said, while U.S. House Speaker Nancy Pelosi revealed she visited Ukraine’s president to show unflinching American support for the country’s defense against Russian aggression.

U.N. humanitarian spokesman Saviano Abreu told The Associated Press that the operation to bring people out of the sprawling Azovstal steel plant was being done with the International Committee for the Red Cross and in coordination with Ukrainian and Russian officials.

As many as 100,000 people are believed to still be in blockaded Mariupol, including up to 1,000 civilians who were hunkered down with an estimated 2,000 Ukrainian fighters beneath the Soviet-era steel plant – the only part of the city not occupied by the Russians. 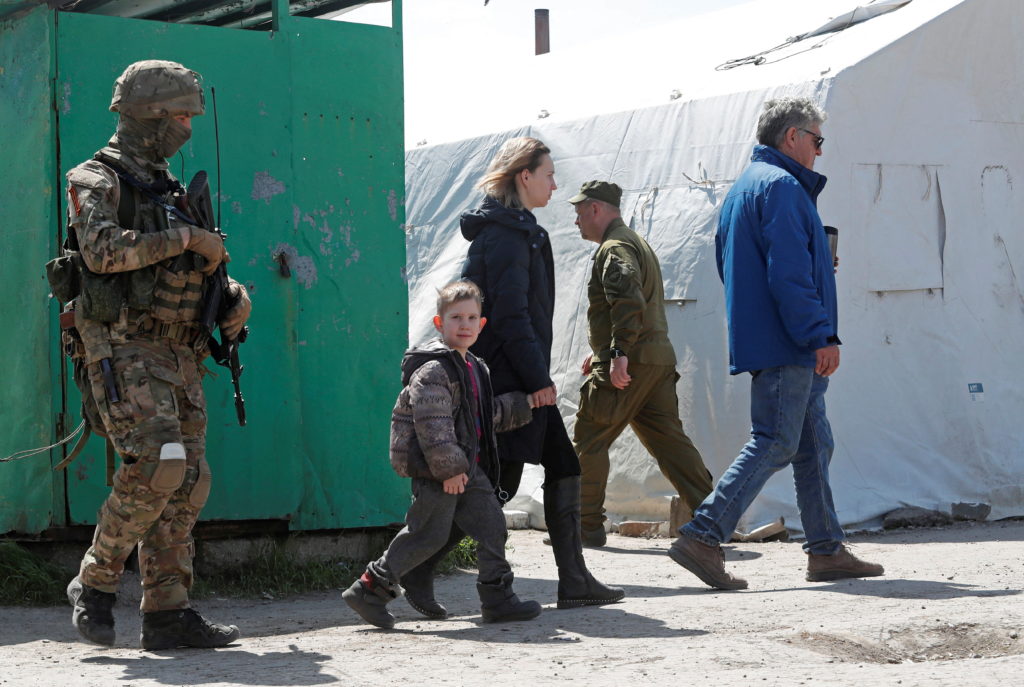 A woman walks with a child as evacuees, including civilians who left the area near Azovstal steel plant in Mariupol, arrive at a temporary accommodation centre during Ukraine-Russia conflict in the village of Bezimenne in the Donetsk Region, Ukraine May 1, 2022. Photo by Alexander Ermochenko/Reuters.

Abreu called the situation “very complex” and would not give further details. Like other evacuations, success of the mission in Mariupol depended on Russia and its forces in a long series of checkpoints before reaching Ukrainian ones.

People who have fled Russian-occupied areas have at times described their vehicles being fired on. Ukrainian officials have repeatedly accused Russian forces of shelling evacuation routes on which the two sides had agreed.

Pelosi, a California Democrat who is second in line to succeed the president, is the most senior American lawmaker to travel to Ukraine since Russia invaded Ukraine on Feb. 24. Her Saturday visit came just days after Russia launched rockets at the capital during a visit by U.N. Secretary-General António Guterres.

During a Sunday news conference in the Polish city of Rzeszow, Pelosi said she and other members of a U.S. congressional delegation met with Ukrainian President Volodymyr Zelenskyy in Ukraine’s capital, Kyiv, for three hours and brought him “a message of appreciation from the American people for his leadership.”

Rep. Jason Crow, a U.S. Army veteran and a member of the House intelligence and armed services committees, said he came to Ukraine with three areas of focus: “Weapons, weapons and weapons.”

“We have to make sure the Ukrainians have what they need to win. What we have seen in the last two months is their ferocity, their intense pride, their ability to fight and their ability to win if they have the support to do so,” the Colorado Democrat said.

Russian forces have embarked on a major military operation to seize significant parts of southern and eastern Ukraine following their failure to capture Kyiv. Mariupol, a port city on the Sea of Azov, is a key target because of its strategic location near the Crimea Peninsula, which Russia seized from Ukraine in 2014.

“All the leaders of the free world know what Russia has done to Mariupol. And Russia will not go unpunished for this,” Zelenskyy said in his nightly video address. He warned that Russia was “gathering additional forces for new attacks against our military in the east of the country.”

Limited evacuations from the city took place on Saturday, but the details had been unclear given the number of parties involved in the negotiations and the volatile situation on the ground.

The Russian Defense Ministry said a total of 46 people, a group of 25 and another numbering 21, were evacuated from areas near the Azovstal plant.

A top official with the Azov Regiment, the Ukrainian unit defending the steelworks, said Saturday that 20 women and children were evacuated from the plant itself. Civilians have sheltered in a maze of underground tunnels while the plant has been under siege.

In a video posted on the regiment’s Telegram channel, regiment Deputy Commander Sviatoslav Palamar called for the evacuation of wounded Ukrainian fighters as well as civilians. “We don’t know why they are not taken away and their evacuation to the territory controlled by Ukraine is not being discussed,” he said.

An Associated Press journalist saw women and children arriving in Bezimenne, a village which is under the control of Moscow-backed separatists in eastern Ukraine, accompanied by U.N. and Red Cross representatives. The U.N. has not confirmed that people were able to leave Mariupol on Saturday.

Elsewhere in Ukraine’s eastern Donbas region, about 20 older adults and children clutching bags along with their dogs and cats boarded a minivan Saturday in the town of Lyman, where at least half the population has fled Russian shelling, The van, marked with a sign reading “evacuation of children” in Ukrainian, sped off toward the city of Dnipro as explosions were heard in the distance.

“The liberators have come and have freed us from what? Our lives?” said Nina Mihaylenko, a professor of Russian language and literature, referring to the Russian forces.

Undeterred by air raid sirens and warnings to shelter at home, people in the southeastern city of Zaporizhzhia visited cemeteries Sunday, when Ukrainians observed the Orthodox Christian day of the dead.

“If our dead could rise and see this, they would say, ‘It’s not possible, they’re worse than the Germans,’” Hennadiy Bondarenko, 61, said while marking the day with his family at a picnic table among the graves. “All our dead would join the fighting, including the Cossacks.”

Getting a full picture of the unfolding battle in eastern Ukraine has been difficult because airstrikes and artillery barrages have made it extremely dangerous for reporters to move around. Also, both Ukraine and Moscow-backed rebels have introduced tight restrictions on reporting from the combat zone.

But Western military analysts have suggested that the offensive in the Donbas region, which includes Mariupol, was going much slower than planned. So far, Russian troops and the separatists appeared to have made only minor gains in the month since Moscow said it would focus its military strength in the east.

Video and images from inside the Mariupol steel plant, shared with The Associated Press by two Ukrainian women who said their husbands are among the fighters refusing to surrender there, showed unidentified men with stained bandages; others had open wounds or amputated limbs.

A skeleton medical staff was treating at least 600 wounded people, said the women, who identified their husbands as members of the Azov Regiment of Ukraine’s National Guard. Some of the wounds were rotting with gangrene, they said.

The AP could not independently verify the date and location of the video, which the women said was taken in the last week in the maze of corridors and bunkers beneath the plant.

Numerically, Russia’s military manpower vastly exceeds Ukraine’s. In the days before the war began, Western intelligence estimated Russia had positioned near the border as many as 190,000 troops; Ukraine’s standing military totals about 200,000, spread throughout the country.

With plenty of firepower still in reserve, Russia’s offensive still could intensify and overrun the Ukrainians. Overall the Russian army has an estimated 900,000 active-duty personnel. Russia also has a much larger air force and navy.

Hundreds of millions of dollars in military assistance has flowed into Ukraine since the war began, but Russia’s vast armories mean Ukraine will continue to require huge amounts of support.

Left: A woman sits with children as evacuees, including civilians who left the area near Azovstal steel plant in Mariupol, arrive at a temporary accommodation centre during Ukraine-Russia conflict in the village of Bezimenne in the Donetsk Region, Ukraine May 1, 2022. REUTERS/Alexander Ermochenko